Friday October 16, 2020 – Sometimes I see people launching when I’m taking the boat out and I wonder if they are going to do better than us fishing late.   They launch to fish a couple hours before sunset.   It reminds me that  great day can happen in a couple hours of a hot bite or one big fish.   The difference between a nearly fishless day and a great day can be as simple as not stopping till you get enough.  It took me three hours to get my first hit and fish this morning.   I fished the Bay of Pigs, the Trash Racks, and Romero looking for a school of stripers.  It was grim.   I got word that Steph in the morning that he was going to meet me on the lake later that afternoon around 11:00.   I texted him how slow the lake was and suggested he might be better off on the forebay for his short day.   The only thing that kept me optimistic was seeing an occasional fish on the Panoptix .   I sonared some bush fish in the Bay of Pigs but they just wouldn’t bite.   I caught one good fish fishing the causeway before heading to meet Steph. The racks didn’t give up a single hit or fish all morning and I fished it thoroughly.

Steph and I fished the submerged brush piles in the Bay of pigs with no hits or fish.  We took a break to chat.  Steph is a great hunter and he brought me some Pig Sausage. I was  glad he was able to fish today because I promised him I would also go on Saturday to deliver some flies he needed–a dozen SV Mickey Fin Clousers.   At the rate it was going, I wasnt into repeating the boring morning.   I switched to smaller craft fur flies hoping to increase my hooking odds on the light bites.  I was actually trying to catch dinks.    I was desperate enough to  fish  for crappie at the brush pile but even they were ignoring me.    We fished our boats side by side around the Bay of Pigs and only caught couple dinks for the trouble.   At noon I was ready to call the game but Steph thought we should hit the Racks together to look for a stray striper to save the day.   We sped over to the racks and there were no boats or white trucks to be seen-a good omen. First cast I hooked a nice fish and Steph and I even hooked a double. Again, in hindsite, we didnt start catching fish at all till the main Solonar Peak at 1:00   We finished the next two hours with 15 fish between us–all nice fish over 20 inches.    It turned out to be a great day and I have Steph to thank for that.   I dont think I would have fished the racks again  after having such bad luck there in the morning.   It’s hard to explain but sometimes a dead spot can turn on or a school of fish can sometimes cruise in and everything changes.  Again some of the hits were light.   Or its just Solonar science.   The pumps were off today which might also explain the absence of schools of fish.

I noticed the Tesla was back at the lake and I checked out the trailer hook up to the car.   It looks like the tesla does not have hookups for lights or brakes on the trailer.  That’s a deal breaker for me.   Hopefully the Tesla Y I ordered will arrive sometime in the next couple week but Ive cooled off the idea that I would tow the boat to the lake with it. 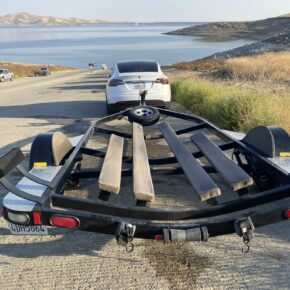 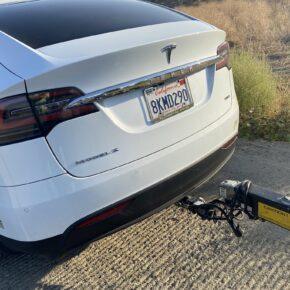 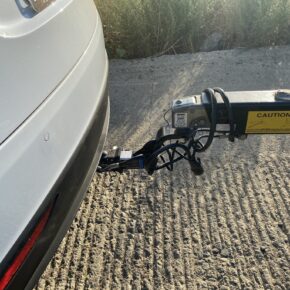 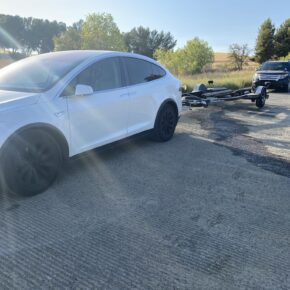 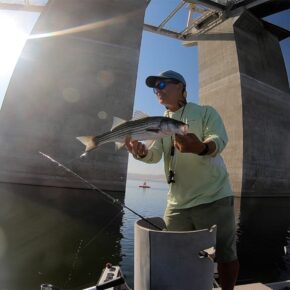 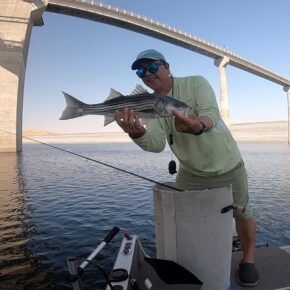 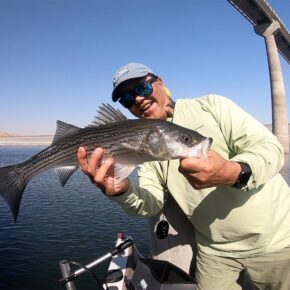 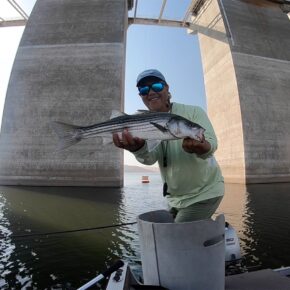 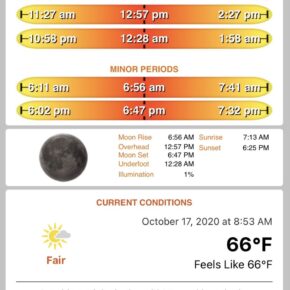 One thought on “Don’t Stop till you get enough”