Saturday Jan 23, 2021 -For most of the week, it looked like the weather would prevent me from fishing Friday through Monday. It seemed like everyone was fishing the Forebay with some success on my work days this week. Friday was blown out and it looked like rain and wind from Saturday to Monday. The Forebay weather prediction changed on Friday afternoon and a window of opportunity opened up on Saturday. I was especially anxious to get back to the Forebay after Ken and I put 80 fish in the boat last Sunday. The big takeaway for me last week was that if one could find and stay on a school of fish in January and be able to fish a suspended fly in front of a cold fish, One could potentially catch fish all day long on the coldest day of the year. January has always been a puzzle for me and till this year, I thought a good day on the forebay in January was 6 fish. Vaughn and I landed around 50 fish today.  Some of the fish I caught had 2 inch threadfin shad in them.  The bait is there,  but I didn’t see it.

There are days when anyone can catch fish in the forebay and there are days that it takes great effort and patience just to catch a dozen especially when the water is 48 degrees. Some days it takes the full “PILE” – Persistence, Ingenuity, Dumb Luck and Electronics. Today was a PILE day for Vaughn and I. I have some great memories of days where Vaughn and I have caught tons of fish all day long fishing our boats side by side. There are some advantages to fishing with someone in separate boats. I think the main advantage of fishing alone in a boat is positioning the boat for the optimum cast and strip using electronics to stay on the fish in the exact same relative position.  Especially fishing slow,  casting upwind on a drift covers more water and keeps the line tight.   Some of the takes were so light that they were just on.   The fish fought great in the cold water today.   Vaughn and I had some great luck fishing to large schools of fish over the years.  I think I got lucky on the morning schools.   Early in the morning, we got on the fish at our first stop and pounded them. We spread out and stayed on a different schools of fish, Vaughn with his Side Sonar and I with my Panoptix in Perspective mode, till the bite stopped.

Persistence – A third of our fish we caught today were caught in the first hours from the morning schools. The longer you could stay on the moving schools, the more fish you could take. But, as the morning progressed, the fish got picky. The bite dropped off about 10:00. The schools were still there but they just wouldn’t bite. We decided to “not” catch fish over other schools of fish elsewhere and headed over to the powerstation. I broke my rule against leaving fish to find fish. I wanted to find eating fish so I rationalized. At the powerhouse, again we found large schools that wouldn’t eat. We managed to catch a couple fish there, but for the amount that we were metering, it was pathetically slow, humbling if not humiliating. After trying everything in my fly box and all my lines and rods, with no consistent success. I headed east to find those big schools of fish that were there last week for Ken and I. Maybe they were dumber or maybe the water was warmer and they would eat. The water was a constant 49 degrees everywhere all day. I checked the rock walls, the trench and even spots in the middle around the buoys but could find the concentrations of fish we say in the morning and at the powerhouse. I was about to go home at 2:30 and decided to tell Vaughn I was leaving. He was parked over a the big school we worked over at the powerhouse holes. As I approached him, my 2d Chirp Sonar went off.  Dropping the Panoptix in the water and searching,  I saw slow big schools all around out from the boat and stopped and started fishing . On my first 5 casts I had 5 fish and I decided not to leave for home and I could see Vaughn  hooking fish too.  From 3:00 on  something happened and the bite was on. The ticket was to find the school, position the boat perfectly to the school about 45 degree out aft and upwind from my casting position,  Lead the fish with a cast if they were moving or cast a fly right into the middle of them and let it sink without stripping.  A couple time I glanced at the panoptix after hooking fish and watched the school scatter and then follow the hooked fish 30 feet right to the boat and then just go to the bottom and sit.   That would explain a lot of things,  how casting to the exact place you caught a fish might be loser probability,  or why Ken and I caught so many fish last week right under the boat when there was nothing on the down sonar.  I ended the day with at least 20 fish from 3:00 to 4:30 as did Vaughn.  Steve Santucci told me once that the secret was “Don’t Give Up.”

Ingenuity. – When you can see that you are fishing over lots of fish without catching them, it become a great opportunity to test.  Like finding a rising trout that you just can’t seem to catch.  The test is the funnest thing about fishing for me.  Figuring out what works sometimes takes hundreds of casts and lots of fly and line changes and if you catch one,  it doesn’t mean you have the answer unless you can duplicate it with some regularity.   I caught two fish in a row with a very sparse small bucktail clouser that Len Bearden tied and I thought I had figured it out, but then I went fishless with that fly over schools of fish for an hour. Turns out it wasn’t really the fly but the presentation. I figured out that fishing the clouser through the schools too fast was spooking the cold lazy fish. The method that worked most today was casting a lightly weighted sparse craft fur fly and letting it sink to the bottom, twitching it like a trout nymph or stripping it it an inch at a time The majority of fish I caught today was on a slow if not still fly.

Electronics– Today I tuned and used the Perspective mode on the Panoptix for the first time. I can say that it is so much better than the Hummingbird 360 that I am forever removing the 360 from the boat. I love how you can tell if the fish are moving or sitting. I didn’t realize how limiting 2d sonar was until I used a perspective Panoptix sonar to adjust my position. It was especially deadly toward the end of the day when the fish got active. I could see schools of fish and their positions relative to my cast. It was a matter of locating and presenting – site fishing stripers with electronics. Big fun 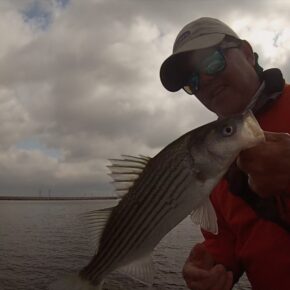 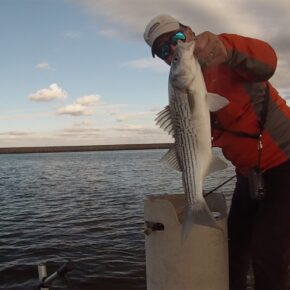 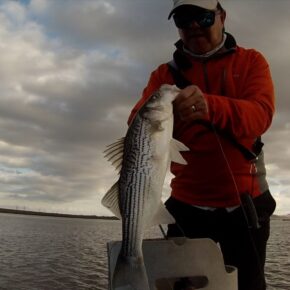 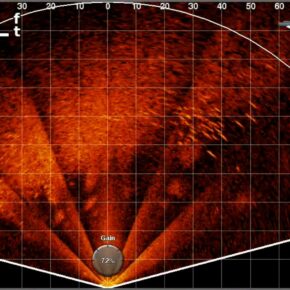 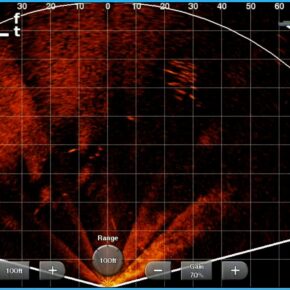 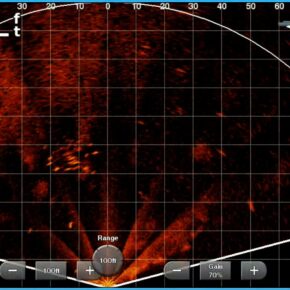 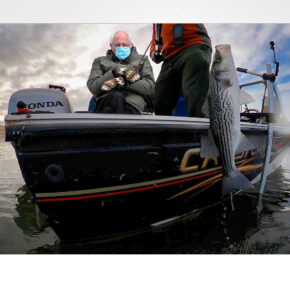 2 thoughts on “PILE Day with Vaughn on the Forebay”