I’ve been a gear head for most of my fly fishing years, always looking for the better rod or flies, the newest lines, the best boat I could afford and electronics -lots of electronics.

The first fish finder I ever owned was a Fish Lo K Tor flasher (the little green box). One of the first fish finders ever sold, it was a flasher unit. My cousin Wayne and I would take that battery operated flasher, rent a boat off Capitola or Santa Cruz pier, and use the finder to find rock piles and drop offs off the beach. We would clean up on Lingcod and halibut bottom jigging lead heads. The flasher was critical to our success. Over the years I bought a lot of fish finders with each year getting better and better. When I started fly fishing out of a tube in San Luis, it was basic equipment to have a Fishing Buddy sidefinder strapped to the tube. Some of the best San Luis Fishermen would live or die by that sonar when it came to success on the lake and forebay. The ability to see fish to the side has always been the holy grail of fly fishing since down sonar is kind of useless when it comes to targeting fish.

Lowrance released HD side scanning in 2009 and the year of its release, I had one on my boat in San Luis. High Definition Side scanning detail and resolution actually made things a bit more challenging since fish were sometimes drowned out by the sharp returns from the bottom. The best way to see fish was from the radar shadow they would cast and you never got a “movie” of the fish moving but instead you got a snapshot of their position as you moved by or over them. Once spotting a fish on side sonar, it was a good deal if you were trolling but if you wanted to cast to it, you had to pass the fish and then turn the boat 90 degrees to take the shot. If the fish was moving fast, odds were even that by the time you were ready to cast, fish was already gone.

Hummingbird released a 360 sonar in 2012 and I upgraded to that hoping to get an advantage when it came to casting to moving schools of fish. Having the ability to see fish moving around the boat was great when it came to chasing them. The only downside was that you had to wait for a full sweep of rotating radar before you could see the direction fish were moving. Watching schools of fish 1 frame every 5 seconds slow motion was challenging but better than nothing. The 360 worked best in deep water especially around the trash racks. In deep water, the schools are very distinct on the scope because they are on a black background. In shallow water, the fish are on a background of ground noise and the contrast is hard to resolve in shallow water when the returns from the ground and fish are similar angle to the transducer. in less than 15 feet it’s hard to see fish but you can definitely use it to see structure clear as diving.

Garmin’s Panoptix LiveScope was first introduced to the market in 2018, where it went on to receive the 2018 ICAST Best of Show and Best Electronics awards. Honored as the 2018 Technology of the Year by the National Marine Electronics Association (NMEA), LiveScope was also named a 2019 Top Product by Boating Industry. It’s realtime video of fish swimming around the boat was like the jump from x rays to ultrasound. Fish looked like fish and not arches. There are tons of videos on youtube showing jig fishermen hooking crappie and pike right under the boat in real time. As great as that is for fish near the boat, flyfishermen were still yearning for a sonar with realtime info at casting distance. Perspective mode is an overhead view of moving fish and bottom. What makes it better than Humminbird 360 is that it is realtime and the live image makes it easy to see what returns are fish and what are bottom – the bottom doesn’t move. In Perspective Mode, the 150-degree coverage fans out from 75 degrees to the left of center, to 75 degrees to the right of center, with center being the direction the transducer is aimed. The 20-degree coverage includes from the lake bottom upward. 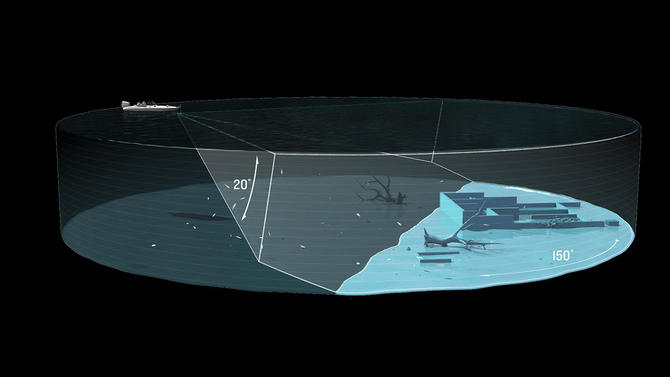 The new LiveScope Perspective Mode mount and software upgrade released in March 2020 was just what I was waiting for as a fly fisherman.

Every mode on the Panoptix has a specific type of fishing in mind and I can see a day when two of these unit back to back can give the angler a 360 degree real time view of the fish and structure 80 feet around.   That would be an amazing upgrade.  No more constantly rotating the transducer looking for fish that have swam out of the field of view.   The next project that might be great is using augmented reality glasses with the active captain application.   My neck is getting sore constantly looking down at the sonar screen and  back up at the water. I’m afraid of being at risk of a new repetitive motion injury in my neck.