Friday Jan 29, 2021 – The seemingly longest week of work always falls after a great day of fishing.   This week was especially long  with the first big chain of rain storms that drenched the bay area all week.   I was aiming at Saturday to get back out  but the storms cleared up a day early and Friday’s forecast was shaping up to be dry and calm from mid morning on.   I woke up early to pounding rain so I made breakfast,  traded some stock in the morning and left for the lake around 8:30.  I was the second boat  of four that launched all day and on of them was Tim Anderson.   I can’t remember a more beautiful and uncrowded day on the forebay.  Sometimes in the winter,  the best uncrowded days also mean the worst fishing  and I was hoping for the best.   I knew I would find them but I was worried that the water was muddied by the rain and that the water temps would be too cold for the fish to feed.

The first place I decided to fish was the powerhouse.   Water temp was 47-48 degrees and the water visibility was about one foot around the powerhouse.    I landed on the site  where Vaughn and I did well at the end of the day last week hoping to see that the fish  were still milling about in the same place.   I cut the engine and my adrenaline surged as the CHIRP sonar went off.    THere were tons of fish around the boat.   I spent the week tuning my Panoptix and it was definitely clearer.  I tweaked the gain and sensitivity setting a bit as well.  I decided to start with a 310 grain shooting head and a small threadfin shad pattern that I tied after finding some in a fish last week.   I figured with the low visibility,  I would need to suspend the fly as much as possible  and  try to keep the fly in front of the fish as long as possible.   It was the worst of both conditions–really cold water and low visibility.    I fished the morning hard and didnt get a single fish for two hours even though I could see dense schools all around me.    I switched out lines and flies and finally got one on a 4 inch chartreuse flashtail clouser with 380 grain line dragging the bottom.    Tim joined me at around 11:00 and we tried fishing the mudline .  I was very excited to fish that mudline,   Funny thing though,  most of the fish were concentrated in the muddy water and not in the more clear water.  The fish in the muddy water didn’t seem to be moving as fast as the fish in the clear water and I thought maybe that was a good thing since they might be feeding.    Tim and I went fishless on the mudline and we finally decided to split up and look for dumb fish.     I tried fishing the wall and the area across from the ramp along the dam.   The schools that were there last week had thinned out and the fish that were there were not eating.    I headed over  to the west side holes that Ken and I did well on and there were no fish there as well.   Around 1:00 I decided to concentrate putting a fly on those big schools in the muddy water.   That was a wise decision.

In the afternoon I decided find a school of fish and line up down wind from it .   Casting over the school and jigging the fly on the bottom as the wind drifted me over schools of fish.    I caught a few fish right on the bottom  keeping my strips short,  and my pauses long.    Like last week, the hits were extremely light.   As I worked the schools in front of the powerhouse,  I found some very dense ones and caught fish slow stripping through them .    Like last week,  the fishing really picked up after 3:00pm and I put 15 fish in the boat by 4:30.

The fish were all keepers and in great shape.  They were cold as ice and fat.  I kept a couple and the autopsy did not yield any shad I was totally surprised to find them  STUFFED with scuds!  These fish were getting really fat force feeding scuds.    I can’t wait to get out again.   I told Tim that If it weren’t for the panoptix livescope telling me I was not catching fish while fishing over thousands of fish,  I would have quit early.   The livescope  has made striper fishing into site fishing for me and has renewed my passion for fishing  the lake and forebay.    I can fish for hours trying to figure out how to get those fish to eat as long as I know they are there.  Im ruined for life.  2D sonar is so pre Covid.

Ive never seen the fish so stuffed with scuds.  There must be clouds of them down there.  I also caught a few fish today like last week just soaking the fly with no movement.    Under these conditions,  with the fish hugging the bottom and the low visibility conditions,  maybe an indicator with a long leader might work.    Next time I go out,   Im going to try a full sinking line an also set up a floating line with a slip indicator. 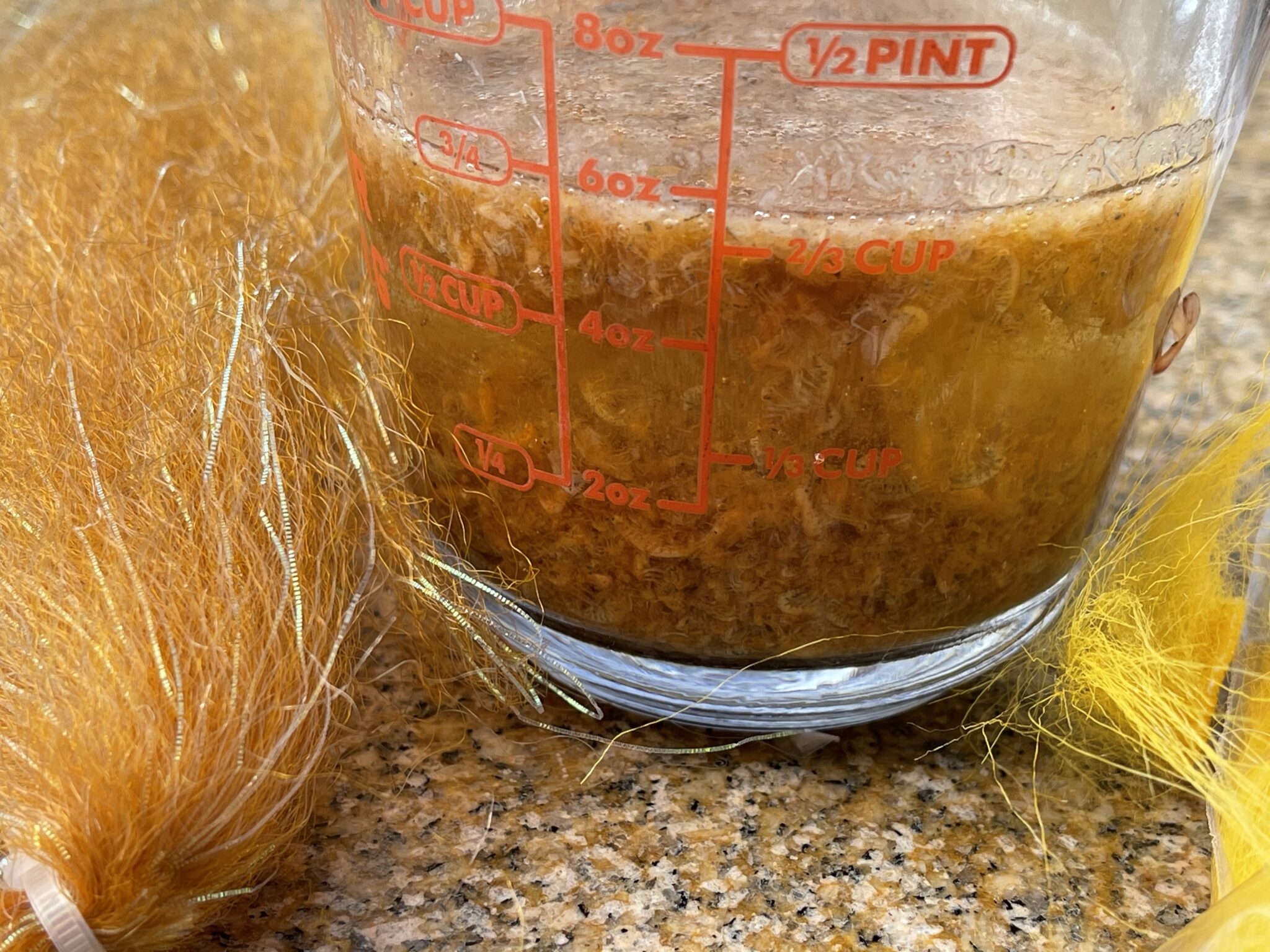 From one 20 inch fish -freshwater scuds