Sunday January 31, 2021 – The last day of January 2021 was a beautiful day.  I caught 12 stripers,  I fished with  Brian, Vaughn and Dan Blanton and met some new fly fishermen.  I’ve decided to call a day that I catch only 1 or 2 fish an hour a “minimum wage” day.  It was tough fishing today,  but I have to remind myself January average was one fish every two hours  until this year.   What was different today than three days ago was the lack of Mud lines.   The entire lake is now low visibility.  I think that is the reason there were not as dense concentrations of fish in the regular locations.   I sonared fish much more scattered and also closer to the shoreline.   I should have fished the rocks on the dam but I was too busy today chasing deepwater stripers with the sonar.

This year  I’ve have learned to hunt stripers and site fish them with the Panoptix–i know im casting at a live target everytime I cast.   I must have fished over thousands of fish and only manage to get a tenth of a  percent of them to hit.   It’s been only a month of fishing with the panoptix in perspective mode and I find myself  constantly watching the screen while Im stripping the fly.   After staring at the screen for 7 hours a day while my fly moves through the fish on the sonar, I am beginning to anticipate which sonar fish are most likely to hit the fly.   If you’ve watched fish over the years right before they bite a bait or fly,  you begin to see “hungry” behavior,  LIke a trout circling a salmon egg or a trout slowly rising to a dry fly that you know is going to commit- you recognize subtle patterns of movement.   Although you can’t see the fly or fly line on the sonar,  you can see the behaviour of fish before and after you hook them.   Sometime I can actually see a fish speed up in the school to hit the fly.   It’s very obvious when you hook a fish on the sonar,  And some of the education only happens in hindsight which is why recording  the sonar to study later is very valuable.   You can see the fish around the one you hook either scatter or follow the hooked fish.  I’ve seen stripers  on the sonar spooked after getting “lined” .   I have noticed that  higher fish return a brighter sonar and lower fish sometimes fade out as they approach the bottom.  I have verified that hunch by putting the sonar in forward mode to see where the fish are in the column.     Im done fishing the old way and I can see myself hunting fish with the sonar all year from now on.  It’s definitely a game changer    Most of my day was spent moving the boat looking  for the right school of fish to cast to and positioning.   When you achieve the right combination of positioning and fish density I can feel a high percentage cast.    Dan Blanton said confidence is the key and the Panoptix a a confidence generator.     The schools in the forebay move around in an area  but dont ever stay in one place for long.    Sometimes you get lucky and a big school of fish moves into sonar range while you are fishing.  Plus once in awhile you land on them as soon as you cut the motor.

Searching for schools with the Panoptix is a learned art for a fly fisherman.   Position of the boat and direction of movement of the school is critical which beat the old way of blind casting repeatedly when there are fish under the boat and not out.  My new method of fishing is to point the sonar 45 degrees in the direction of travel when searching.   Moving in a serpentine path helps see the schools of fish better and I steer the trolling motor to try to get sideways to the high concentrations of fish.    Once I position myself ,  I try to place the fish  90 degrees  to my boat so I can get multiple shots at moving schools of fish.   After working a school without catching fish,  I’ll spin the boat around and look for the biggest school I can that is moving away from the boat and try to follow it until I find another school.  If im searching lots of barren water.  I pull the panoptix and turn the big motor on and search the topography in the lake with down side sonar at 10 mph till I see at least 4 fish on the screen at once.  Then I stop and search around them with the livescope.   I have had luck finding schools in unfamiliar water like that.

I still have a lot to learn about hunting and fly fishing for  stripers with sonar but now I’m feeling confident that I can put my fly in front of fish in any conditions.  Getting them to eat is the trick.  I can only imagine how great it will be if 30 percent of the stripers I saw today on the scope are hungry for a minnow.  Todays fish were again stuffed with scuds.    I used a scud colored clouser today. 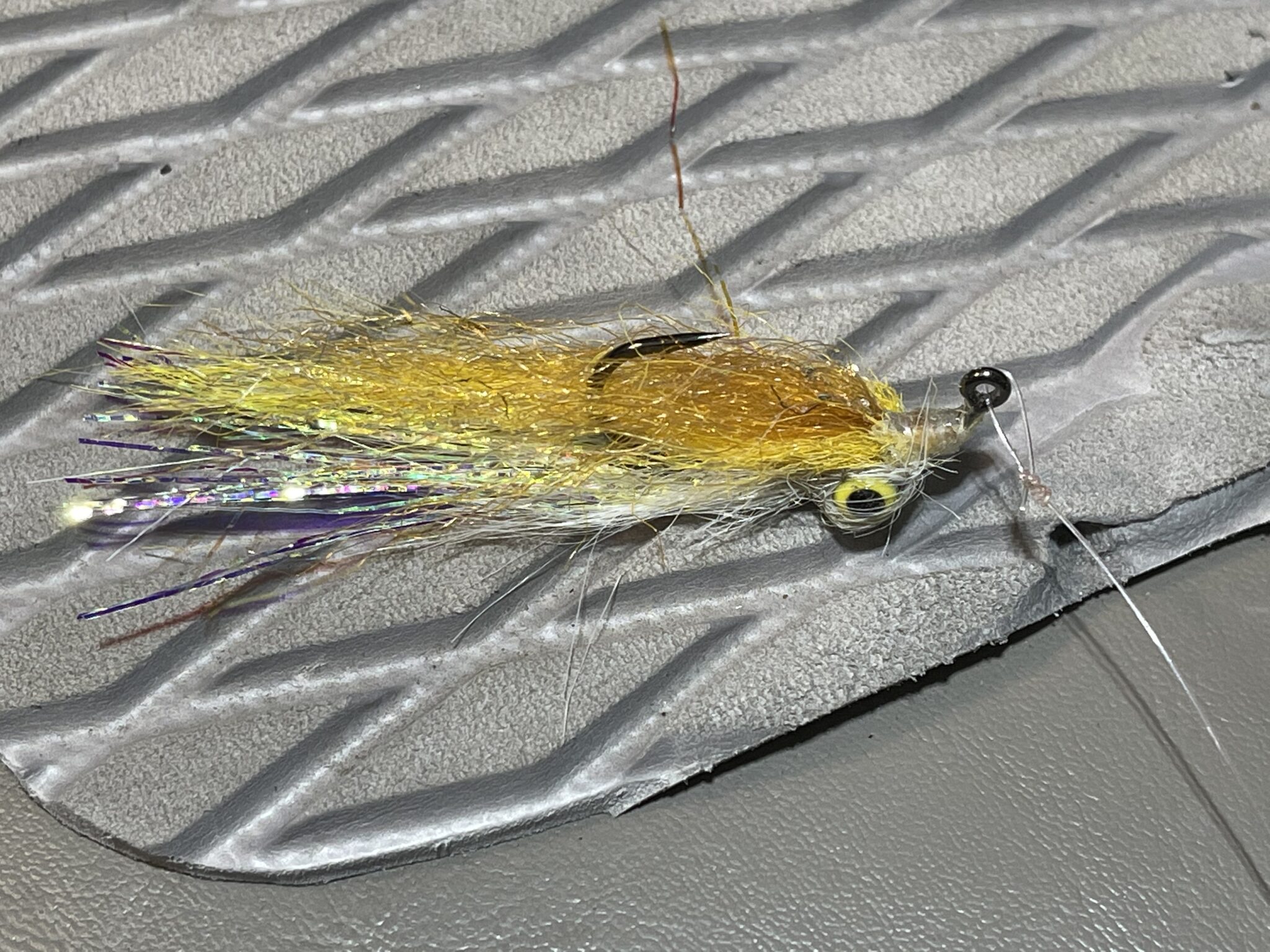 I finally received my long anticipated Douglas SKy G 8 wgt this week and fished with it most of the day.    It’s a joy to cast and the light swing weight makes such a difference.   It’s a fast rod and I can easily cast a 100 feet with a single back cast  Today I fished  380 grain 28 ft t14 head on braided shooting line.  It was near perfection.  I wish they made a one piece.

I only spent half an hour in the morning trying to catch a striper on an indicator setup.   I think the water visibility  made it difficult plus there was no surface movement on the water to jig the fly.  Nada. 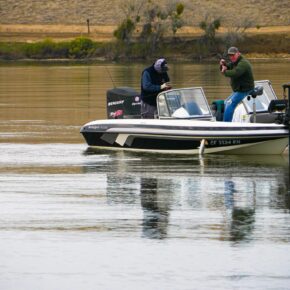 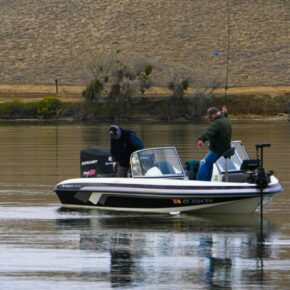 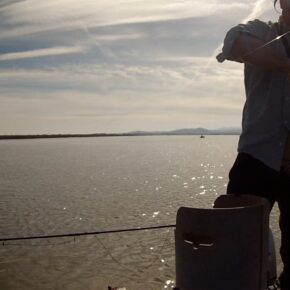 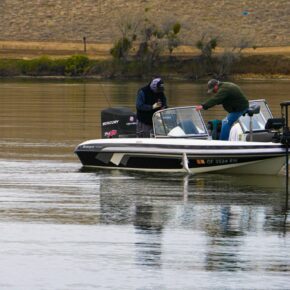 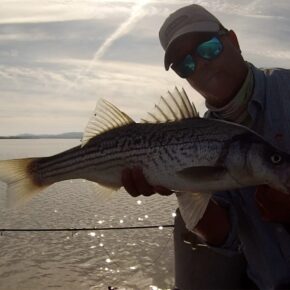 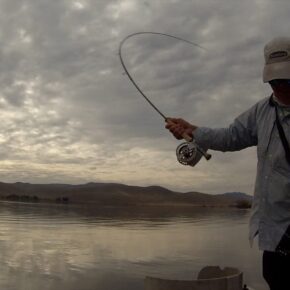 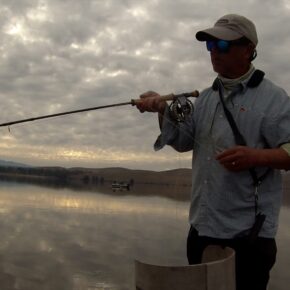 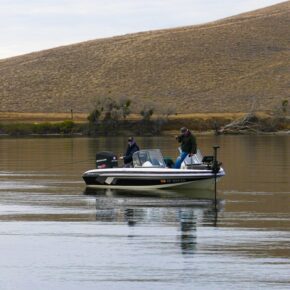 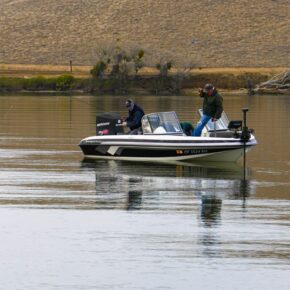 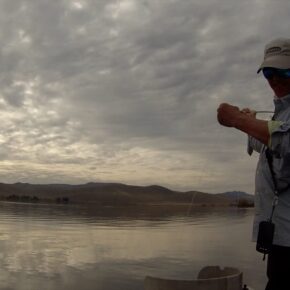 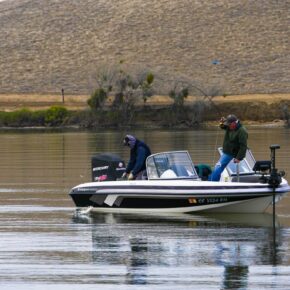 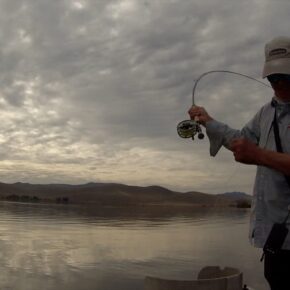