February 19, 2021 – The difference between a really bad day and 21 fish can be the last couple hours of the day as it was today.    I remember many “magic hour” sessions on trout streams when the whole day boils down to half an hour of crazy fishing. It felt like that today on the forebay.   Today felt different that all my forebay trips this year.    I had the slow strip down and was pretty confident that I could get fish pretty consistently putting a well placed slow retrieve over certain patterns of fish.   Today I actually caught half the fish on a pretty fast retrieve.  I modified my technique based on what I saw fish doing around my fly.   I have my panoptix tuned to see the fly  and  Im starting to modify my fishing for the day based on how the fish respond to the fly.   Most of the day I could see fish line up behind my fly and follow it for 20 feet without hitting it.    If it happened twice,  I would change the fly .   I must have tried 10 different patterns and sizes today.   What seemed to work best was the fly I had on when the bite started up at 3:0O   The fly of the day was an olive over tan and brown clouser – a pattern I learned from Lee Haskins.   I think it’s Lee’s Delta Smelt pattern

I was pretty confident when I launched this morning.   I left in the rain in San Jose and arrived to blue sky and calm waters when I launched.   I was boat number two on the lake and I had the whole place to myself.    It was almost too good to believe which turned out to be prophetic for most of the day.      I decided to try some new areas before hunting fish on the west side. I started by fishing  the shoreline from the launch to the islands.  I found a big school of fish milling around the pilings of the old fishing pier east of the launch.   I’m pretty sure they were stripers but some of the sonar marks were pretty round.   Looks like a big school of crappie are hanging out there as well.    I didn’t get a single follow or hit with those fish and left for the sure thing or so I thought.   The  area of the forebay between the picnic area and the powerhouse is full of humps and valleys that most of the forebay fish like to hunker down in.    Ive noticed large schools of fish just sitting there not moving.   Most of today’s fish didn’t want to move 10 feet to eat a fly.   Fishing hard over schools of fish was pretty futile for me and I managed to catch one fish every two hours most of the day.    By 3:00 I only had 3 fish all day and the winds had kicked up to about 15 mph with white caps from a calm morning.   Yesterday Dan and Vaughn got 21 fish mostly at the end of the day so I made myself stay and  decided to try drifting a long cast across the forebay in an area where I saw frequent schools of fish using the wind current.    It paid off and I started putting fish in the boat,   I would make a long cast into the wind,  line the boat up 90 degrees to the cast and point the Livescope at the fly out about 80 feet.     I would strip the fly in short strokes and twitches while the drift kept my line tight and fly moving slightly all the time.  Then I would feed line out as I drifted and retrieve it again.   Maybe the bite turned on with the wind and whitecaps.    Brian called me while it was blowing concerned for my safety.  It was blowing hard in Gilroy.    It’s nice to know someone was checking to make sure I was safe.   The fishing during the blow was getting good.    I couldn’t drift more than 100 feet without getting a fish for awhile.   In an hour I had 8 fish.    I decided to try one more long drift from the last east buoy to the powerhouse when the wind layed down,  I found large schools of fish milling around the last buoy and  casts to them .  Like a switch went on,   the same schools of fish that wouldn’t look twice at my fly from 9 to 4  were starting to hit a moderately fast stripped fly on the move ,    In the last hour I landed 10 fish and would have left after 20 had a large school not moved in around the boat as I was getting ready to leave.     I ended the day with Blackjack (21)  and made to the gate for rebanding by 5:30–the last boat out.    For a cold windy day  it was much better than minimum wage. 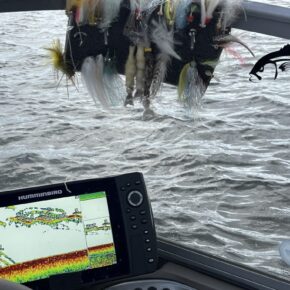 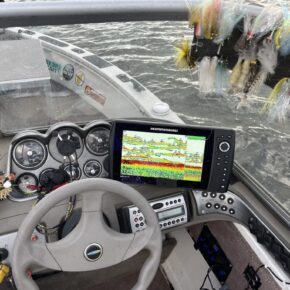 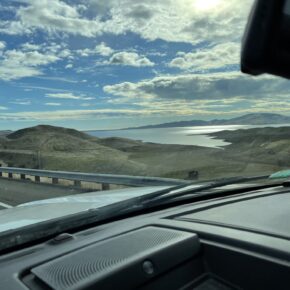 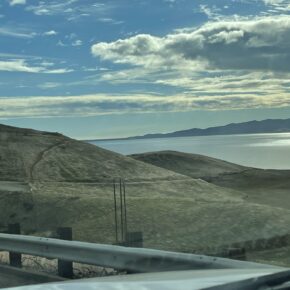 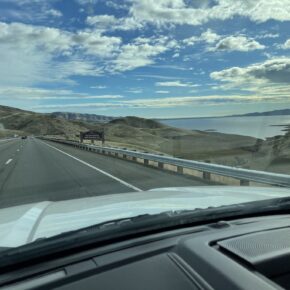 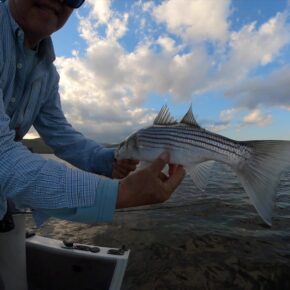 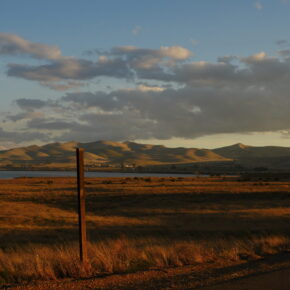 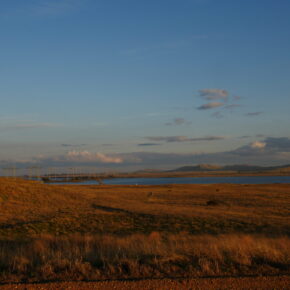