I had to look back nearly two years to find out when I last caught a trout.    Half the equipment I own is geared towards trout fishing and this last weekend I was ready to start a new love affair with this fish.   My cousin Wayne’s invitation,  we decided to fish the Yuba River on friday  and fish Bailey Creek Lodge for a day on Saturday with some good friends from the Millpond (a fly shop we all worked at in the 70’s)   I agreed to meet Wayne at the Yuba at 8:00am and left the house at 5:00am.   We hired Joe Garza, owner of JAG Flyfishing to float and dry fly fish the Yuba.   About an hour away from the Yuba,  Wayne called me with the bad news.  The  heavy night time rains raised the river 50 percent and the river was blown out and muddy.   We all decided to head north to Redding and fish the lower Sacramento River for what was left of the day   We Launched at the Sundial Bridge and floated to Bonneview Launch. 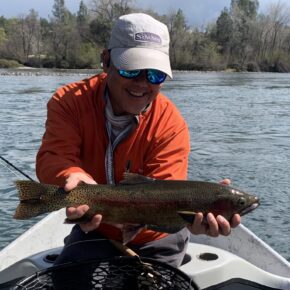 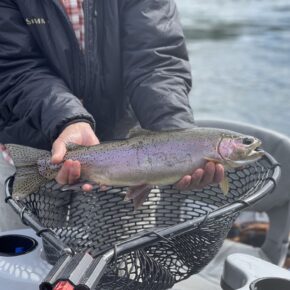 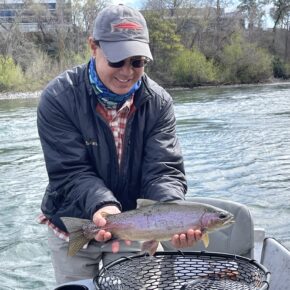 It was potentially a great dry fly day-overcast and a bit warmer. Karma was in the air with flags flying half mast to remind everyone about Asian American racism after the Atlanta Brothel Murders. I think we were the only Asian Americans on the river that I saw. I have never seen that many drift boats in that amount of river at one time and I was told that it is worse on the weekend. We played around at the launch for two hours rigging indicator rods up but Wayne and I agreed to try to fish dry flies only even if it meant waiting and hunting. We waited and waited. PMDs were popping every wear but fish weren’t coming up for them, at least around our boat. Other boats at the pullout told us they had some dry fly action. Wayne and I caught a couple fish each on Stoneflies under an indicator but in the last hour of the day, we did find a pod of a half dozen fish rising in the rain, hail and wind. We both had shots at fish on PMDs but the conditions were challenging and neither of us connected. The fish were not consistent. Overall it was a fun day at least having some shots and a couple fish but I don’t think I will ever fish that section again even though there are thousands of fish per square mile. The one big fish I caught was pretty beat up and looked caught before, the others looked pretty fresh and were lukewarm hot.

The Sacramento through Redding makes me rethink my idea of living on a trout stream. In California, its the only place you can have city living right on a great trout stream. Living on its banks,  like several people I know, makes it a fish anytime you want option. I’m jealous of that accessibility, but I wonder if I would ever tire of it versus living on the Delta where you can change it up a bit for different species out your back door. The 2.5 hour to the Yuba and the 4.5 hour drive from the Lassen area wasn’t that bad even though I tolerate long driving trips less as I age. If I spend at least two days up there when I go, its super easy. I’m looking at buying a 2021 Revel 4×4 van conversion so its much easier to go up there on a whim. Between rivers in NorCal and Southern Oregon, I think I could stay in San Jose and be happy with the variety of fishing available by camper van for weeklong trips after retirement. Even the delta is an option with a camper if I can tow my boat as well.

I appreciate my cousin Wayne. I haven’t seen him in over a year. His kids have grown into adults since I last saw them and they are spectacular. Now that we are both nearly empty nesters, I suspect we will fish more together like when we were kids. Of all the many great flyfishermen I’ve know, very few if any can hold a candle to his knowledge and abilities. The ones that could are mostly dead. From his knowledge of rods and reels, his fly tying skills and his ability to figure out what fish want and adapt no one I know alive has the total package like he does. It also takes money to be that good and he has built a fantastic Dental Practice in Chico. People who don’t know him that well don’t realize they are standing next to a legend as modest as he is.

On Saturday, Wayne arranged a day at Baily Creek Lodge – one of my favorite pay to play trout destinations near Red Bluff. In the two years that I fished it last, the fish have grown and the fishing is off the hook. The average fish there is 20 inches and 5 pounds. The best thing about this trip was the company. Victor and Judy were there and cooked us a lakeside lunch on his BBQ. The last time we fished together was in the Amazon two years ago. They also like on the banks of the Sacramento River in Redding. Victor works at the Fly Shop in Redding. Also, present was an old friend from the Millpond days- Brett Jensen. Brett is an accomplished trout and salmon artist and Klamath River Steelhead guide (retired). Its been years since we fished but he remains one of the coolest guys to fish with in the world. Hes got serious skills. One of the fun things to do when you can catch 20-25 fish at will is to test your equipment. Everyone brought numerous 2-4 wgt glass and graphite fly rods to play with. A couple Hal Jansen Glass rods amongst them. These rods are extremely rare, very slow and specialized for light tippets. Brett caught several 5-6 pounders on 6x tippet with a 4 wgt Hal Jansen Rod – talk about bending into the handle. Also tried some Epic Glass rods and fished my 3 wgt 10 foot Helios II and my Douglas Sky G 5 wgt for the first time. . All agreed that there is something special about that Douglas 5wgt as Wayne cast a complete fly line on his fist cast with it. 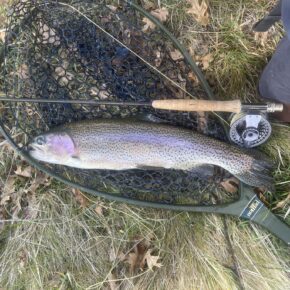 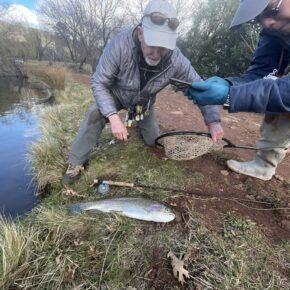 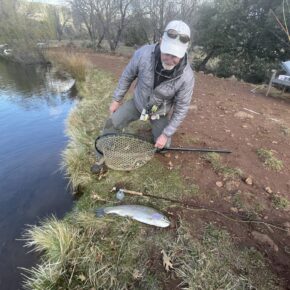 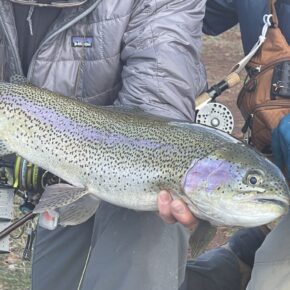 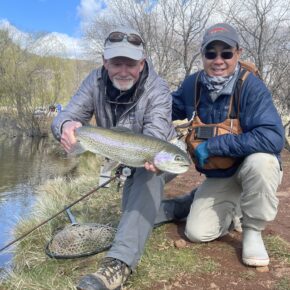 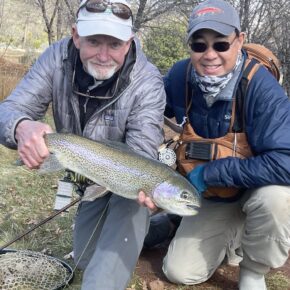 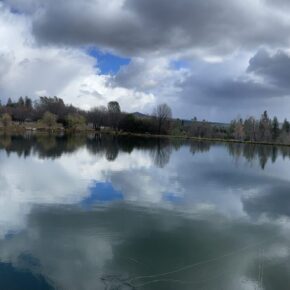 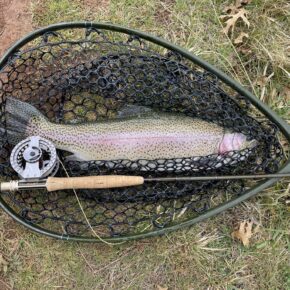 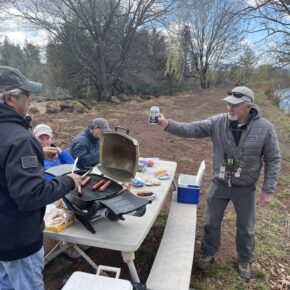 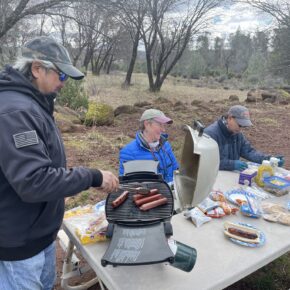 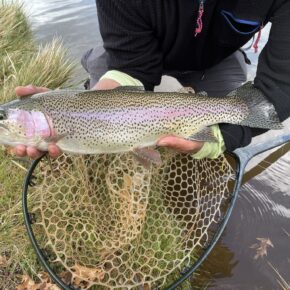 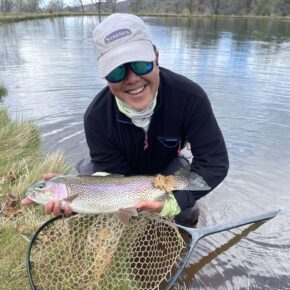 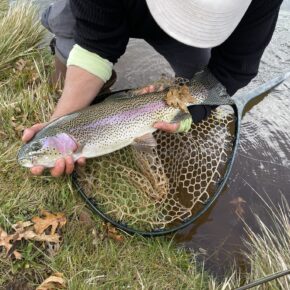 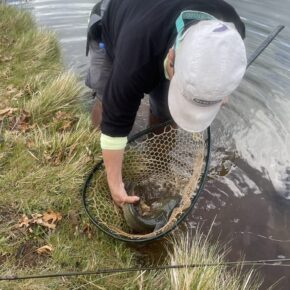 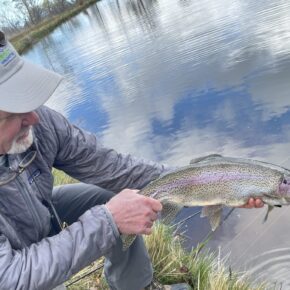 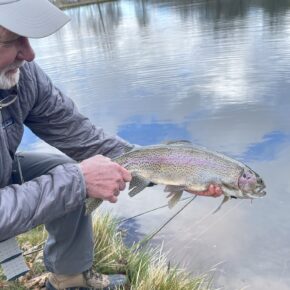 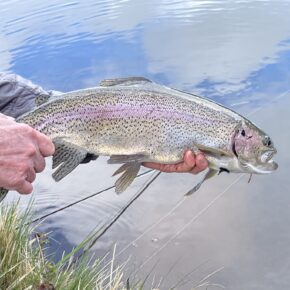 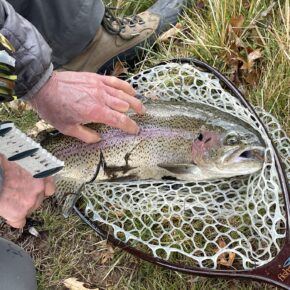 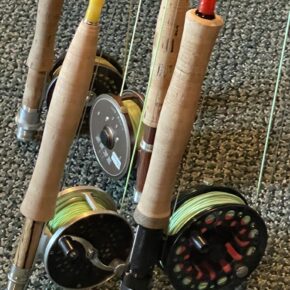 One memorable fish had a cancer on its face. I have never seen such a thing on a trout and when I showed it to Wayne, he told me he had caught that fish last week as well. These fish are triploid and maybe this is the cost of messing with nature. The concept of creating a triploid trout is simple: cause an egg to retain a chromosome it would normally expel. In normal fertilization, after an egg and sperm combine, one chromosome is kicked out, leaving either XX (female) or XY (male) chromosomes behind. If the extra chromosome is retained, the offspring will either be XXX (triploid female) or XXY (triploid male). Triploids are fish that reach maturity after 3-5 years. I think the maximum life spam is right around 10-12 years but most live only 3-5. Baily Creek which is down the street from Eagle Canyon Trout Pond is a perfect environment for Triploid Trout since the pond is spring and river fed all year long keeping the water cool and clean. The growth rate of these fish are amazing . One pumped small fish was filled with midges. 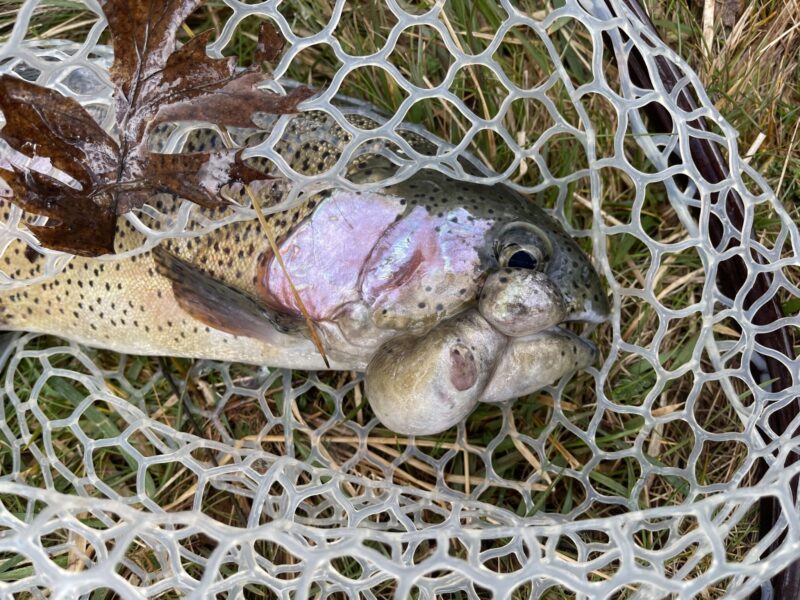