My memories of the first time I ever fished Pyramid lake are bit fuzzy.   It was on a fishout with the San Jose Flycasters around 1973.  The 5 hour drive from San Jose made me think that it was on another planet at the time.  The stories I had heard about easily catching fish over 5 lbs in that lake made me think it was the best trout fishing in the world.  Forty eight years ago,  I dreamed of large trout in inches and not pounds.  All I wanted  back then was a 20 inch trout.  I was 13 year old and my parents let me go camping with a bunch of old men in Nevada for a weekend where I would put my waders on and wade to my armpits in dangerous freezing cold high altitude lake and throw black woolley worms  with a  scientific anglers shooting line on my Garcia 8 wgt fly rod. I rode up with Ken Chrisman who at the time was in charge of the youth program at the club.   After a day of fishing  they had a huge campfire and got  drunk and told stories about 5 and 10 lb trout that got away.  Dinner that night was a pit roasted whole pig.    Those San Jose Flycasters knew how to party in the 70’s and I managed to get a couple 20 inch trout 4 years before I would get my drivers lic.

Pyramid Lake Nevada is the home of the largest Cutthroat Trout in the world. These massive Lahontan Cutthroat Trout grow to fantastic sizes up to and over 20 pounds in the high alkali waters of Pyramid Lake.  The staple food source for these monster fish are the Tui Chubs. Along with the giant cutthroat, the lake supports the rare Cui-ui fish that are found nowhere else on Earth except at Pyramid Lake. Pyramid Lake is a desert lake located approximately 30 miles northeast of Sparks Nevada. The lake is fed from Lake Tahoe by the Truckee River. Pyramid Lake is the last remaining water from the ancient Lahontan Sea of over 12,500 years ago.  Pyramid Lake is an Endorheic System meaning that it has no outlet and the water levels go down with evaporation.  The alkali content in the lake is very high at around a PH of 9.4, and the  water temperatures range from around 75 degrees in summer down to 42 degrees in the winter.

The first trout stream I considered my “home” water was the Truckee river between the Town of Truckee and Lake Tahoe.   Our family had a cabin on the river and I use to spend a couple weeks a year fishing every hole  and run in that river in that 10 mile stretch of water out of Tahoe.  The river flows 121 miles northeast as the sole outlet of Lake Tahoe .  It drains part of the high Sierra Nevada, emptying into Pyramid Lake in the Great Basin   The locals told me stories of a species of cutthroat trout up to 60 pounds that use to run thick in the water where our cabin was and he told me that the native Piutes would harvest them with pitchforks.  Those giant cutthroat trout spawned in the Truckee and became extinct in Pyramid Lake in 1943 after the Truckee was diverted for agriculture by Derby Dam.    After the extinction of the giant cutthroat,  a strain of Summit Lake cutthroat was reintroduced into the watershed  which is highly alkaline (ph9.4) because of evaporation.   Pyramid lake is a remnant of an ancient lake called Lahontan which 12000 years ago was an 8500 sq mile inland sea.    Archeological evidence suggests Large Lahontan Cutthroat Trout existing during the first evidence of humans in the region of the inland sea.   It wasn’t until the late 70’s that a biologist discovered the original strain of Lahontan Cutthroats living in a small stream 800 miles away in Utah near Pilot Peak.   The original strain now known as  “Pilots”  was resurrected and reintroduced into the lake and they have grown faster and bigger than the Summit Strain ever since. Modern Fisheries Science and the successful reintroduction of the original genetics to the lake,  make Pyramid Lake the most amazing trout lake in the world today with many fish over 10 lbs caught daily.

When my cousin Wayne invited me to join him and some mutual friends to Pyramid last weekend,  I saw it as an opportunity to begin to re-learn the lake.  Wayne and Benson have been fishing the lake every year for a couple weeks for over 10 years and this weekend ,  Ken Oda and  Victor  were also headed to the lake.   It would be sort of a reunion with some old friends as well.  I headed to the lake Thursday evening and booked two nights at the Nugget in Sparks which is 40 minutes away from the lake. Unlike the first time I ever fished Pyramid,  a 4 hour drive wasn’t a terribly long drive to catch giant trout compared to  24 hours by air and 4wd jeep to Jurassic Lake.  Plus even though the camping is convenient right on the lake,  a hotel has 24 hour food, a hot shower and soft bed  which is well worth a 40 minute drive for ultimate comfort.  It was easier now than in the past to buy all the fishing permits online from the Paiute Tribe which regulate Pyramid Lake camping and fishing.

I started researching the necessary equipment and started tying flies a week early.   Wayne told me he uses only a couple patterns 90 percent of the time so I tied only two patterns for the lake –  a Chartreuse Pyramid Lake Beetle and a Black BLOB.    Next I went ladder shopping at Home Depot and bought a 4 foot platform step stool.   It was fun trying to fabricate a custom ladder but I had only one night to think about it and put something together quickly.   Im currently working on a  “better” ladder after returning from the lake-real Pyramid lake gurus have better ladders and platforms.   And extra foot of height can increase your catch rate for the same reasons a casting platform does in San Luis.     Friday morning,  Wayne, Victor and I got on the lake at 5:30 to put our ladders in the coveted spots at Pelican Beach and Launch.   We got there and 10 ladders were already in the water.  By the time I got my waders on and my rod rigged,   Victor and Wayne had already raced down to the water and put there ladders in the water.   I grabbed my ladder and gear ,  ran down to the beach and put in between them as Wayne was landing his second fish.   Note to self -veterans of the lake arrive ready to fish.   From darkness  to sunrise,  Wayne and Victor, fishing on  both sides of me,  landed 10 fish and I had not gotten one hit or at least I didn’t feel them which was more likely.   I still hadn’t figured out the retrieve and cast.   I thought it was just like striper fishing,  everyone was throwing sinking shooting heads and pulling the same  two flies I tied.  It was just me not catching fish as I could see people catching lots of fish all down the line of ladders.   It took till sunrise for me to catch my first fish and the differences between a striper retrieve/strike and a trout strip/strike became more evident with practice.  It is a rhythm.    Benson who fishes the lake for weeks at a time and is hugely successful said its all about the fly and the depth.  Victor describes the strike as a spongy feeling like you’ve hooked weeds.     Wayne was striking at everything and connecting most of the time.   Pyramid lake is definitely a place where experience makes you better.   Maybe it’s the confidence you get after you land a couple hundred giant trout after a thousand casts  akin to putting hundreds of dollars of quarters into a slot machine when you only win occasionally.    It is after all Nevada.   I got into a rhythm after three hours of casting and started to catch fish consistently at a pace of about 3 to 4 an hour.  I heard that evening that a couple guys at the end of Pelican caught over 50 fish each that day although most were foul hooked do to the huge concentrations of fish we could see  swimming at our feet along the shoreline.  Catching a legit fish with a slow strip is more rewarding though.   Both Wayne and Benson are automatic on that lake and great sources of knowledge.  I watched them and copied them as much as I could.    The average fish I caught was over 20 inches but a half a dozen of them were over 10 pounds with my biggest fish caught on the last day around 13 lbs. The Pilot and Summit strains of Cuts are beautiful hard fighting fish. Over the one and a half days of fishing this trip,  I can honestly say I’m very satisfied with the quality and quantity of the fish and I am a beginner just learning the lake. Pyramid lake and I are just starting our relationship and I am already excited for my next trip tying flies and building ladders!

A five hour drive isn’t nearly as long as it use to be with how great the fishing is at Pyramid these days.  The new Pilot strain of Cuts is drawing anglers from all over the world.    It will take me the rest of my life to see it in every season and I know it will become a big part of my fishing in years to come.  The experienced fishermen are saying that the lake has never had so many giant trout in there memory with lots of 10 lbrs caught daily by even beginner flyfishermen.   I love the social aspect of fishing there.   It looks crowded like opening day every day but its nothing like opening day on a stream.  Once you get your spot in the morning.   You tend to stay there all day.   The fishing seems to be nearly equally good almost anywhere and you get to know whos fishing next to you.   Everyone comes off their ladder to help you net and photograph the big one.   Locals and visitors chat it up while stripping, cracking jokes and sharing tips. without prejudice or jealousy.  And there are fishermen from all walks of life and from all over the United States fishing on ladders which were perfectly social distance and no one  wearing masks .   It truly is the closest place to catch Giant Trout consistently without getting on an airplane and also it a great place to camp for a week! 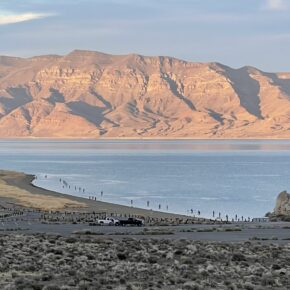 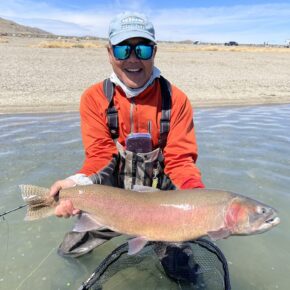 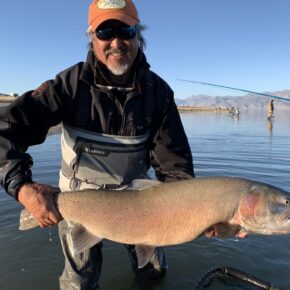 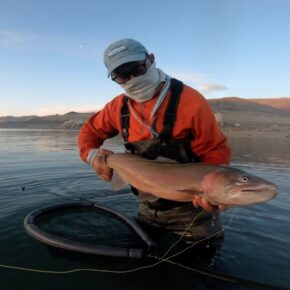 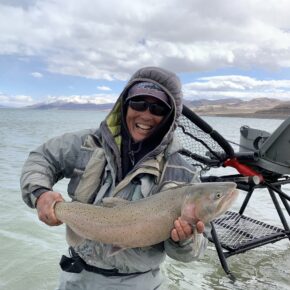 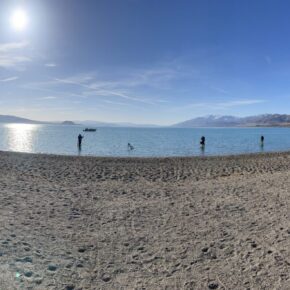 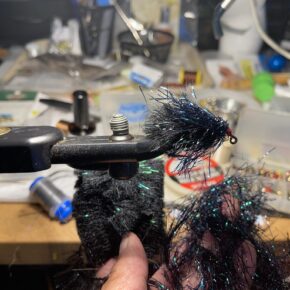 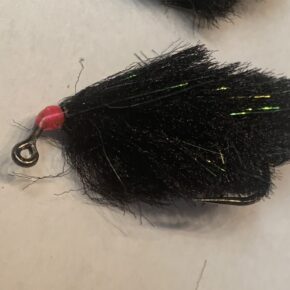 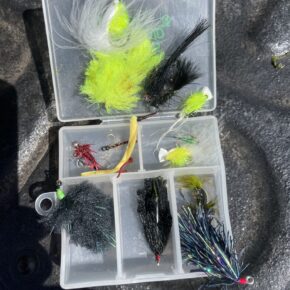 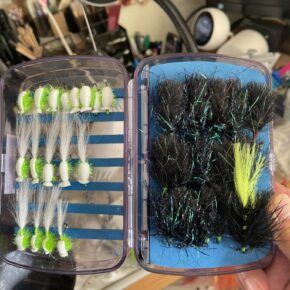 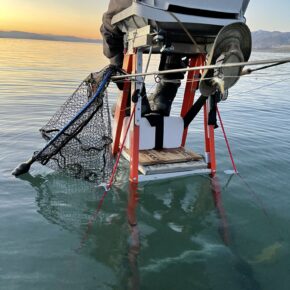 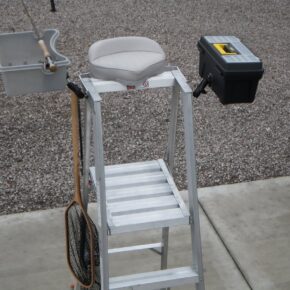