I left the house optimistic that the wind would finally die down so I could fish the Racks.   Like last year this month,  this is the time when the water starts to warm and big stripers start getting aggressive as they begin to spawn.  Full moons,  wind currents and warmer water (around 60)  makes those stripers jump on flies.  The WInd predictions have been off a bit lately as happens this time of year. I drove by the lake only to see the red light on and whitecaps.   The windline said 10 mph.   I launched at the Forebay around 9:00 boat number 12.   There was no wind on the Forebay which happens when the wind is directly east. The water temps were in the high 50s and the visibility was about 2-3 feet.   I hoped the I could hunt them down with the panoptix like last month in these different conditions and headed to the deep areas in the middle of the lake to look for those schools.

The panoptics came through again.  I only cast to targets I could see most of the day and almost all the fish I caught I was targeting on the sonar.    There is much more to site fishing with a sonar to improve results.  A good targeting cast  leads the moving fish and get to the right depth of the fish.   The sonar is tuned to see the fly and as the fly approaches the fish,  if they see it,  they change speed and behavior on the sonar.   watching the sonar,  you can tell when a school of fish sees the fly in the low visibility water,  and you can tell how hungry they are by their behavior.   Some fish would just rush the fly and hit it on the first pause.  and other would hit the fly lightly repeatedly before hitting it hard.  Small strips and large pauses when the fly is being targeted keeps the fly in the visibility zone longer vs a long 2 foot strip which pulls the fly out of visibility.   The density of stripers was about 50 percent of last month but the fish were more aggressive.   Maybe they spread out when the water gets warmer to hunt.   No weeds growing yet. I was able to get about 5 fish an hour fishing from 9-5 – a bit better than minimum wage and pretty steady all day with about 30 fish for the day.    Most of the fish were 16-19 inches with a couple over 20 inches.   I can’t help think that the fish in the lake are all much bigger after hearing how well Brian has been doing these last couple weeks.  You have to love technology when you can get live fishing updates on San Luis Reservoir while fishing for trout in Nevada.  The trash racks will just have to wait another couple weeks since I’ll be fishing Henderson Springs next week.

Last week I tried to draw on my San Luis techniques to catch Pilot Cutthroats off of ladders.   This week I tried to use some Pyramid lake tactics on Forebay Stripers.   My conclusion is that there are more similarities than differences between Pyramid lake trout and San Luis Stripers.   There is alot written on the way to setup a double fly stripping setup for Pyramid which most everybody uses.   The point fly is a larger weighted streamer at the end of 5 ft of butt section.  I use 17 lb Fluorocarbon.   The trailing fly is a small buoyant beetle tied three feet behind.  I tie it right to the hook bend with a clinch knot and use 12 pound Fluorocarbon.  .   The fly combo is fished right on the bottom with t14 and t11.  As the flies are stripped,  they point fly rides a foot off the bottom and the back fly  follows but rises on the pause from the 3mm foam.    The leader setup I used on the forebay was a size 1 weighted Yellow Brown clouser as the point fly and a small unweighted Pink and Olive clouser for the trailing fly.   I could see the two flies on the sonar as I stripped and often times stripers would see the front fly and hit the trailing fly.   I also hooked and almost landed two good stripers on both flies.   I think two flies on slow days will definitely improve your odds.   The surf guys use three.

All in all it was a great day on the forebay but I can’t stop thinking about those deep water stripers on the Racks.  I think they are eating right now! 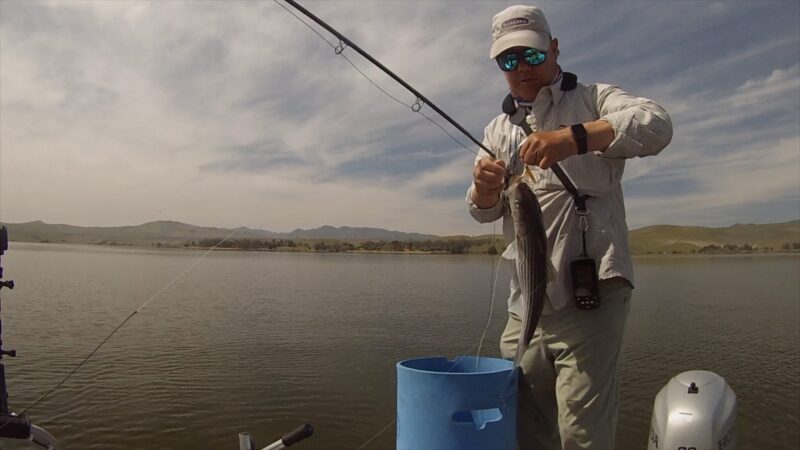 2 thoughts on “April on the Forebay”