Monday – November 22, 2021   Fly Fishing reports from forebay this week have been bleak.   The moon was full last night and I had a feeling it would be a tough day.  It will be two weeks before I’ll be able to fish the Forebay again and I decided to go out anyways and test out a new rod I bought from Lost Coast Outfitters.   The day started slow and ended slow.  I only hooked 4 fish and landed 2 today.   It was the slowest day of the year for me.   I met a 5th grade school teacher out on his boat fly fishing with a friend.  They did pretty good catching  4 fish between the two of them.   Brian also got a couple but it was tough to feed them.    I cast only to fish I saw on the sonar and I saw lots of fish but the fish had lockjaw today.    I still managed to catch a couple to eat for Thanksgiving.     Did you know that Stripers were served at the first Thanksgiving.

This feast most likely happened sometime between September and November of 1621.  The pilgrims made it through that first winter and, with the help of the local Wampanoag tribe, they had a hearty supply of local food to sustain them through the next winter. Striped bass and eels made up a huge part of the early diet of the Pilgrims.    Captain John Smith, wrote in his journal in 1614  “that Striped Bass was a most sweet and wholesome fish as ever I did eat”   And In 1634: William Wood, in his New England’s Prospect, called the Striped Bass “one of the best fishes in the Country . . . a delicate, fine, fat, fish.”  Striped Bass and Deer Venison were the centerpiece foods  served at the nation’s  first Thanksgiving.

The day wasn’t a total waste despite the slow fishing.    I took a new fly rod and some lines to try on the boat today.    I have been shopping for a light switch rod that I could easily cast single handed or double.  I was looking for a 5 or 6 wgt switch rod with the lightest swing weight that I could use for Ocean Perch,  Pyramid Lake chironomid fishing,   Topwater Stripers in the Forebay and to swing subsurface propeller flies for Silvers on the Sapsuk.   Years ago I started to entertain the idea of using a double handed rod on San Luis after I injured my rotator cuff and had to cast an entire season with two hands.   I really liked Waynes R.L. Winston Micro Spey 11’6” 5-weight  but I was looking for something less soft .    I decided to buy a Sage X 11 foot 5 wgt switch from Lost Coast Fly Shop.    The guys at the shop turned me on to there own rod that is designed to fish the surf.   Its a slightly faster rod than the Sage X but it has a much lighter swing weight and it casts 330 grains overhead with power and ease.   Today I casts a couple different OBS 8 wgt lines from 300-370 grains on the Golden Gate.      I also cast a 9 wgt Ambush  and a 330 grain Switch Chucker.    I can’t wait to try this rod out at Pyramid Lake.

One of the fish I cleaned today had a couple three inch Delta Smelt in its stomach.   At least the smelt are still around.   Why the fish weren’t targeting minnow today still remains a mystery. 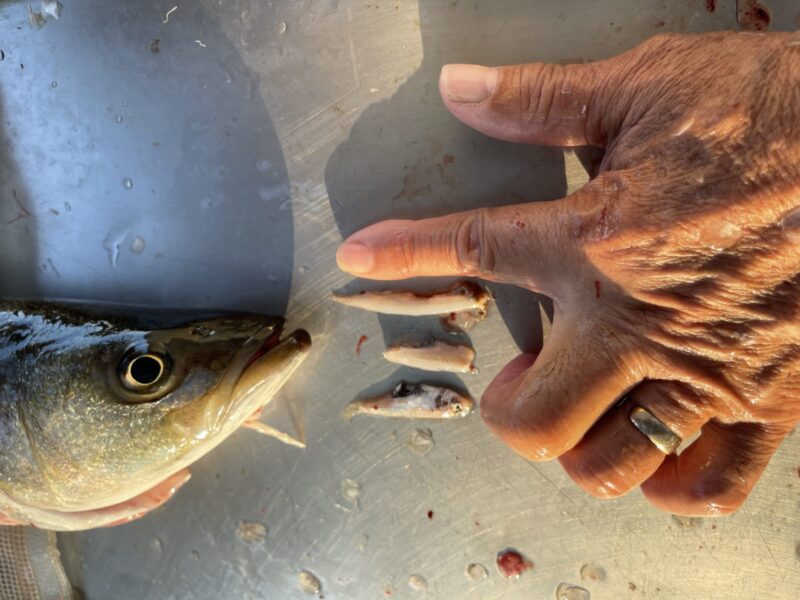