Friday  March 25, 2022.- The forebay fished great today.The morning started out challenging. I fished the trench with a small brown and white clouser as I had last week and picked up fish in the trench fishing 15 feet of water.  The fish are starting to exhibit spawning behavior in the 62 degree water. The stripers are moving in schools of 10-15 fish and hooked fish are being followed in by concerned spouses.   In the afternoon, the fish moved into 18-20 feet of water. The small flies seem to work better for most of the fish.   I switched to a small scud colored size 2 clouser and caught the typical forebay 18-15 inch fish at will not expecting to hook anything gigantic with it.   I even dropped down to 15 lb test to get the fly to sink faster.  The water level is down 2 feet from last year  same time and I felt my t14s were a bit too heavy.   I used  my type three OBS on miracle braid shooting line and got a very straight line to a slow sinking fly.   Its my most sensitive 15 foot depth setup.

Around noon, I decided to try fishing the wall across from Medrious.  The morning was really good and I wanted to check some areas that had not produced this year.   I stopped at the mouth of the Canal and marked a bunch of fish moving pretty fast through there and into the canal.   I caught a half dozen  drifting around the mouth  before  going down the end and fishing the wall and the channel which also gave up lots of fish.

By 2:30 in the afternoon I landed several dozen fish  in the Trench and along the rock wall   I was lined up at the end near the rope in the middle of the trench and  made a cast right down the middle in 20 ft  of water.   I didn’t let it sink much  and  after a few hard strips, I did the “Syn Snap”,  Two strips later my tiny clouser was hooked to a huge fish.   The fish circled the boat taking out backing  and I decided to follow it with the trolling motor.  The fish took a couple good runs towing and turning the boat as I pampered the 15lb test leader  before  I got it up on top.   I felt like I had the fish beat.  Big stripers wear out pretty fast and this one was no exception.    It was floundering on the top and was turning on its side.  I was getting excited to try my fish resuscitator if it floated.     I don’t carry a net but I do carry a couple devices that are designed to lip grip a striper. The huge striper was fat and round like a white bass and at least a yard long.   I estimated it between 25-30 lbs  The fish had unusually large girth almost like a “Wiper”.   The poor striper  was nearly upside down and floating  as I pulled it along the port side the boat from right to left..   I  grabbed the 15lb test leader with my left hand and set my rod down to grab my Lip Gripper with my right.  I awkwardly tied to get one tong of the grip into its mouth from the top of the fish.  The huge striper’s eye followed my every fish dentistry move.  Each  time I tried to slip that Fish Grip in its mouth ,  it would close its mouth like a obstinate  5 year old in my office.   On my  third attempt,  I knocked the fly out of the fishes mouth as it moved its closed mouth from side to side and spun around.   It was unhooked and  rolled over on its side not moving.   I tried to put my thumb in its mouth in a “hail mary” lunge.  As I helplessly watched , the fish slowly sank,  uprighted itself and swam slowly downward into  the deep green water.  I watched and  knew I wasn’t going to get that picture.   I looked at the tiny fly and thought that the barb  probably never got through that tough lip. 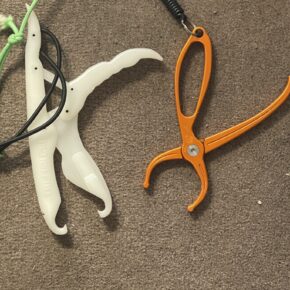 Luckily,  I recorded the fight and I can relive the event forever.   Next time,  I’m going to use a Lippa instead of a Fish Gripper.  Then  “lippa 4 life”  has a smaller profile and can penetrate a closed lip better.   Also,   I need to get the fish coming in from left to right and not from right to left which gives my gripper  hand a straight shot into its mouth.  You would think that the mouth position would be intuitive to a dentist.  I didn’t think of it till it was too late.    Sometimes like today,  you only get one chance to grab that lip and get some.  Another lesson learned from a mistake.

There are some days fishing that you never forget. All other blend into sun losing all detail and nuance. Some events only happen when all the preparation and practice comes together in one lucky moment and everything happens perfectly. I have come to believe that landing a big fish involves a series of skills that are only learned through failure. So what can fail? The timing, the weather, The boat, the cast, the line, the leader, the knots, the fly, the backing, the reel , the rod, the net. Today I reached the last step and made a positional error.   I’m still not going to carry a net though.  I probably would have killed it taking it out of the water. 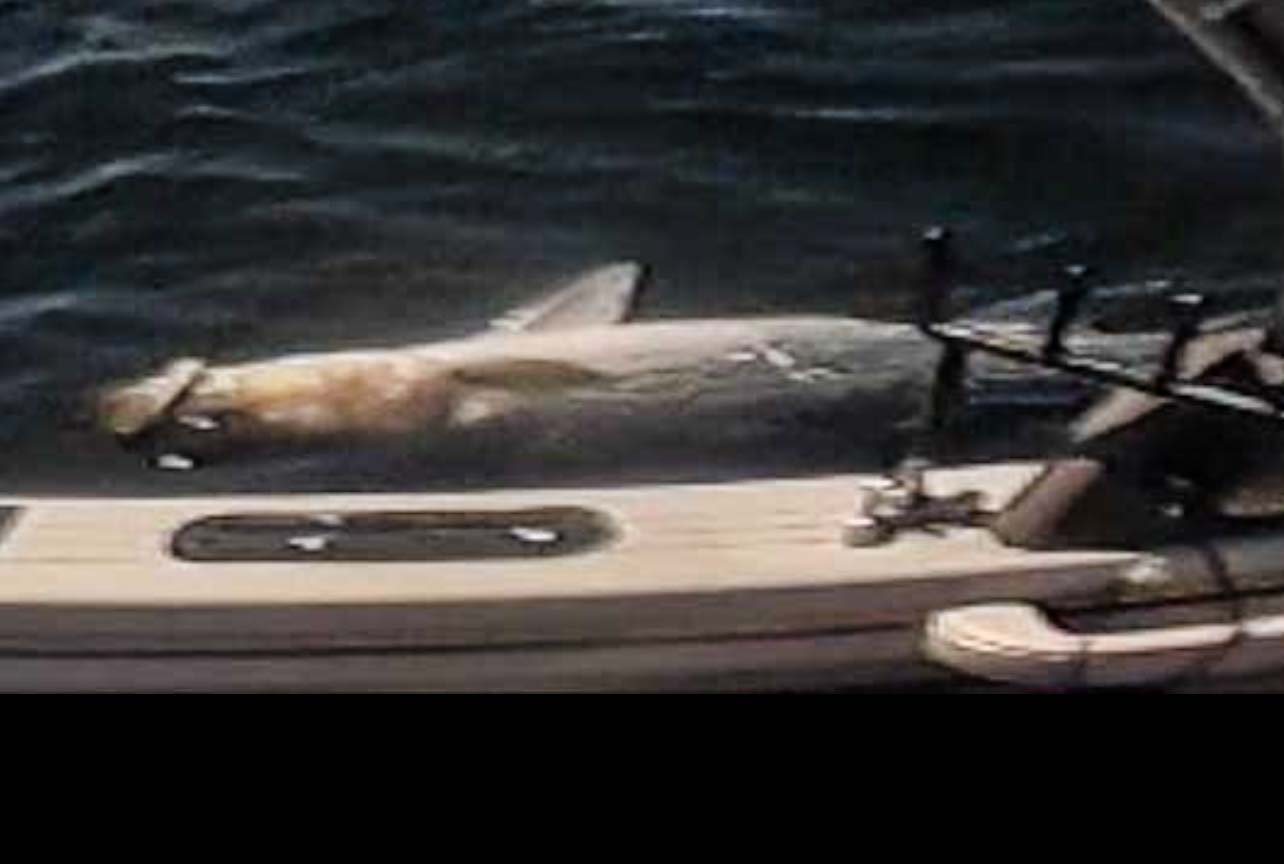 Perhaps it was Divine Providence since the last 30 plus pound striper I caught died from being taken out of the water too long.   I was thinking about that fish as I was landing this one.   I built a special net and water pump for a big striper that needs resuscitation but I haven’t tried it out yet.

I found it hard to keep score on the schoolie stripers I caught after the big one but after editing,  I’m certain it was over 25.    After the beast,  I switched over to a 6 inch fly –a Delta Blue over White  clouser– and I surprisingly still caught lots of 18-20 inch fish even though I had lots of short hits.   I even had another plus 20 fish follow the fly in to the boat.    I don’t know whats in the air,  but lots of friends in the Sac near Chico, and the north Delta are getting lots of big stripers this week.   All the smolts are in the river now.

The forebay is back on and it’s time to rumble. 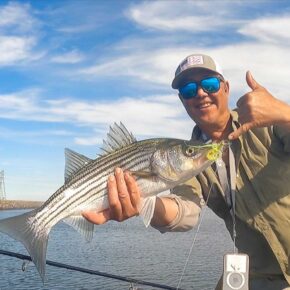 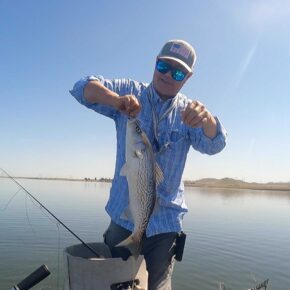 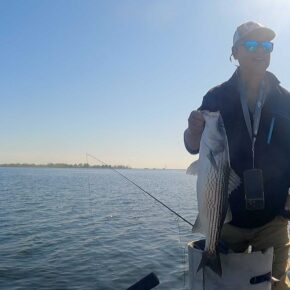 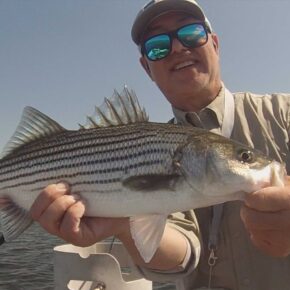 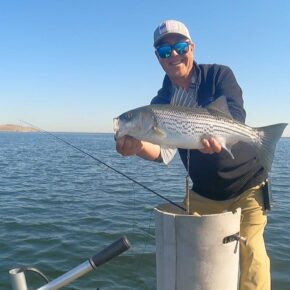 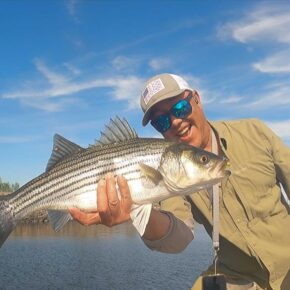 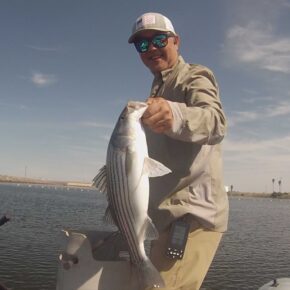 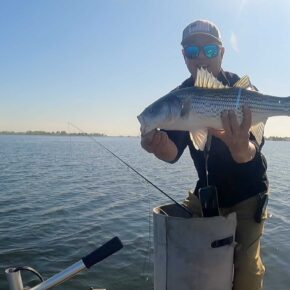 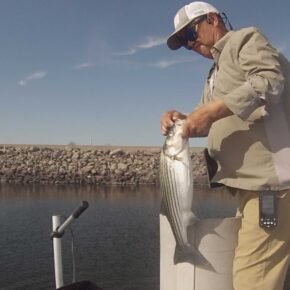 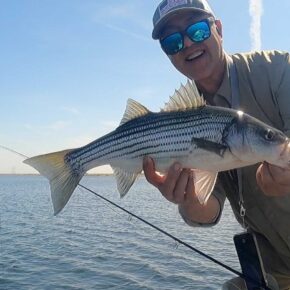 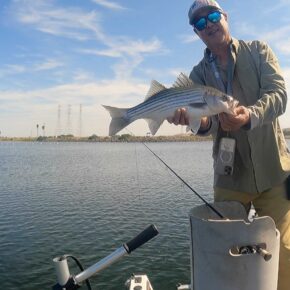 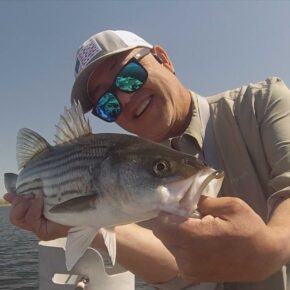 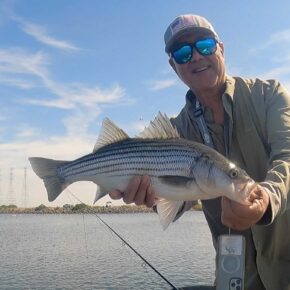 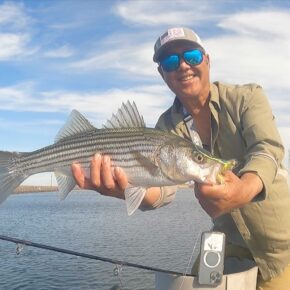 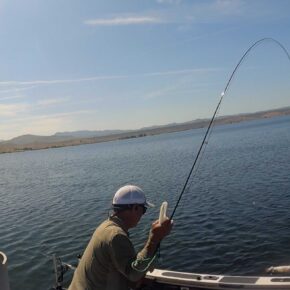 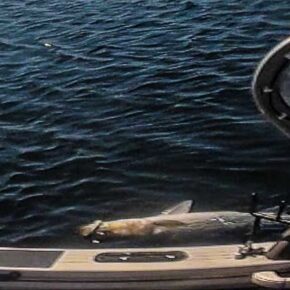 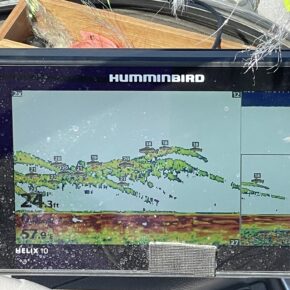 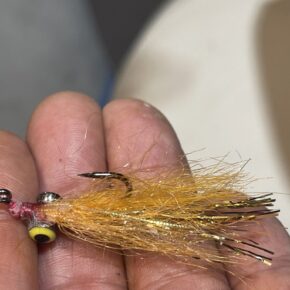 2 thoughts on “Epic Day on the Forebay”