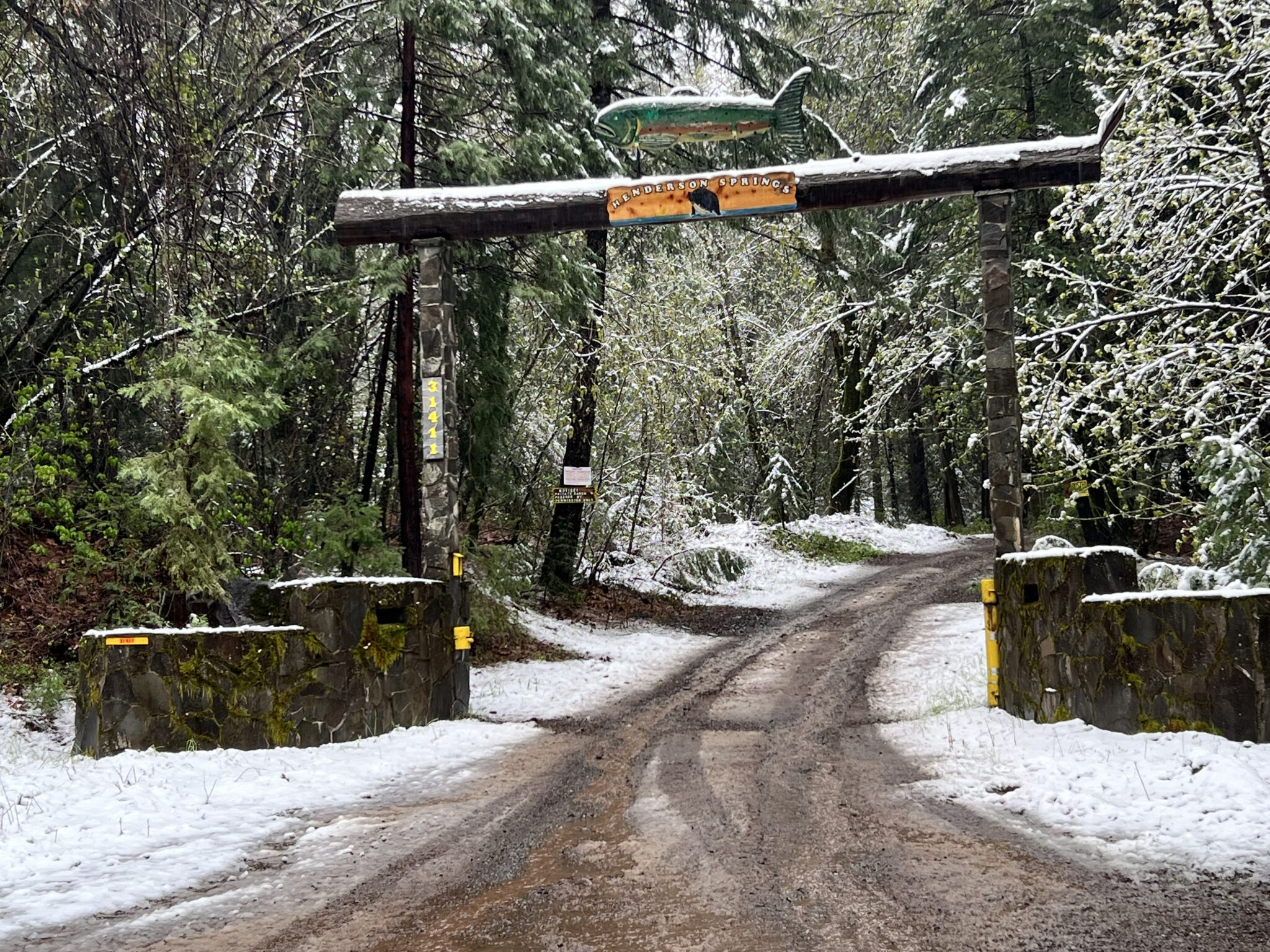 After last months great trip,  I could wait to go back this last week anticipating some dry fly fishing over those plentiful giant trout that we exercised in March.  Two weeks ago, I passed on fishing Pyramid lake because of mild weather predictions.  Luckily, it was the right decision.  The San Jose Flycasters had there fishout that week and reports were slow even with the occasional wind storm and overcast.   The weather I wanted for Pyramid Lake hit Henderson Springs this last weekend dropping snow and 3 inches of rain Thursday Night.   I had fished Henderson Springs with success in the snow and rain in the past  and this trip was no exception.   Success required some homework. I found fish in places where I don’t normally fish. I think the fish respond to fishing pressure by recovering somewhere nice and secluded.  I found fish at the very lowest points of the lakes and  close and around shorelines with sharp drop offs or heavy vegetation. .  I managed to landed 20 to  30 fish per 8 hour  day with a few over 8 pounds every day.  The key was to locate the fish and fish slow over them.  The schools seem to move in a pattern around the each of the lakes so sometimes staying put in an area were surface activity has occurred is a good bet.   There were several times where I would catch three fish in three casts after being fishless in that spot for an hour.  Stay on the fish highway and if you cast there long enough ,  they will come.    My belief that large schools of trout swim around the lakes was reinforced this trip.  Casting nymphs and chironomids at rises was more productive  than casting dry flies. 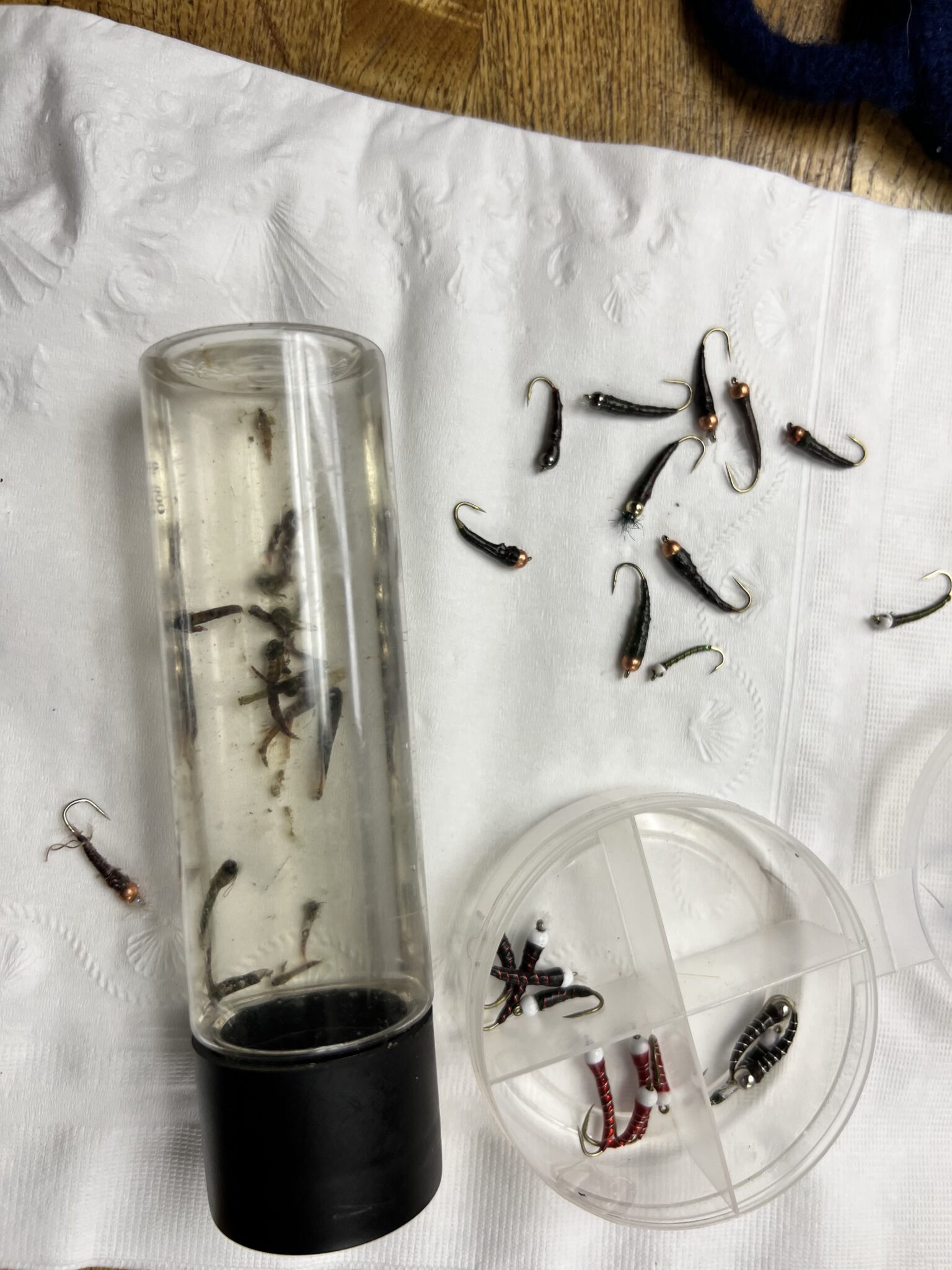 The effective technique to fish the lakes had changed significantly since March even though the numbers were nearly the same for me with the exception of catching less fish over 5 lbs.  I pumped trout from every pond and found lots of big chironomids in the fish  in some ponds and empty stomachs in others.   My theory is that some fish are still learning what to eat and some ponds have more bugs than others.  I actually had great luck with a yellow squirmy wormy.    Also ,  the fish are getting smart about flies.  Most of the fish I caught had been caught before.   Almost no trout this week were caught on fast moving (trolled) leeches.  Those fish that hit leeches  were caught under indicators (balance leeches)  or very slow moving retrieves or wind drifting.   The fish were not commonly following flies to the surface like they were lasts month.   Also,  it seemed to me that the fish were hanging out on the shorelines more vs the deep water trenches perhaps hiding from the pressure.   Maybe they found more things to sample and eat on the shoreline.   I’m sure they are hungry.    The lakes where the fish were eating chironomids fished well with a type 6 line, slow bouncing chironomids on the bottom or fishing them 5 ft under an indicator right on steep banked shorelines.  I found the most effective way to catch chironomid eating trout this trip was to use a type 6   sink tip (7 ft)  vs a type 6 or type 3 density compensated lines (Sonar Stillwater) .  Fishing the Chironomids deep with a short sink tip gets a more ‘up and down’  vs laterally moving presentation at 10-15 feet.   Straight sinking lines are great for Calibaetis nymphs but not so much for chironomids.    It is always a good idea to bring lots of types of sinking lines and not just density compensated ones.    I caught quite a few on the slow lift with the straight sinking lines so I switched to the sink tip and caught more. 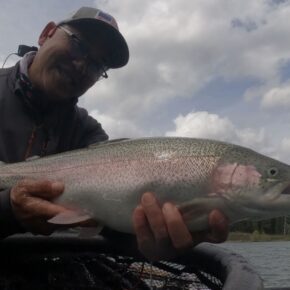 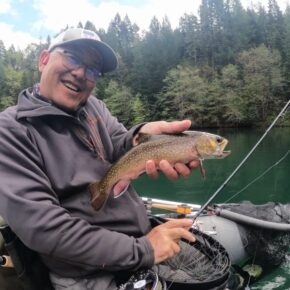 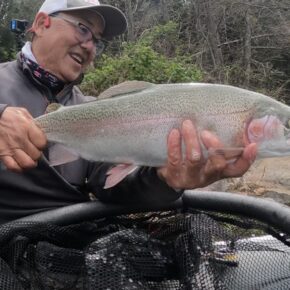 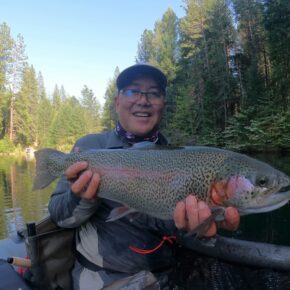 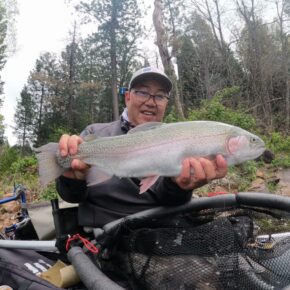 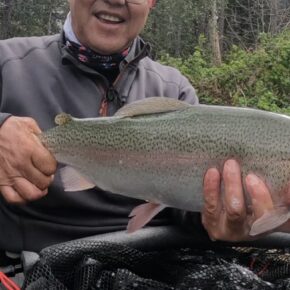 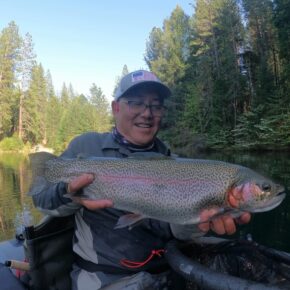 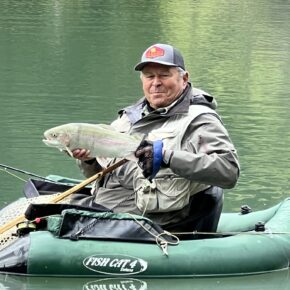 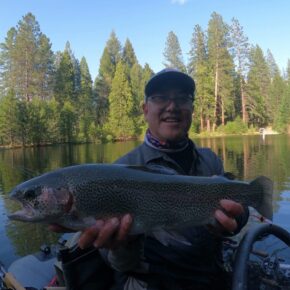 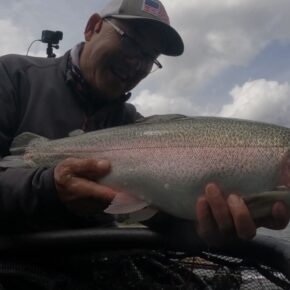 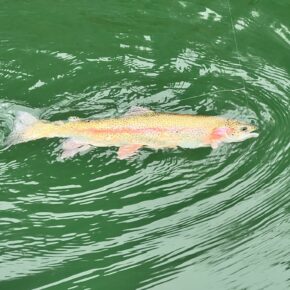 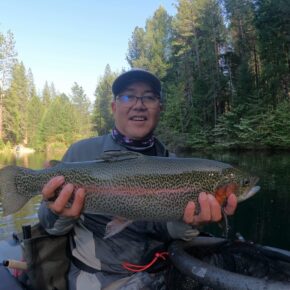 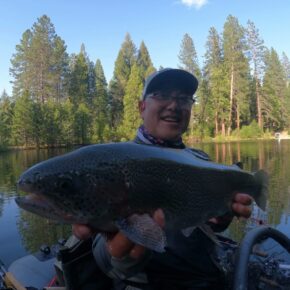 The gang of 8 were all there.  Wayne H., Norm,  Bob, Mike, Peter and two newcomers  Peter’s brother from England Mark and Mikes buddy Tom.   Melissa and Puck provided the amazing feasts every night and great wines were served at happy hour.   Plus the fireplaces were stoked making the lodge incredibly comfortable in the cold and rain. We managed a campfire one evening and Peter brought up his flame thrower to cook a dozen Potatoes  Apocalypse Now style-wrapped in foil and baked in the ashes of a napalm fire for 5 hours.   Amazing potatoes!  Nothing makes a potato taste better than overkill.  Next year we are thinking about roasting a Pig in a Pit.  Peter is an expert. 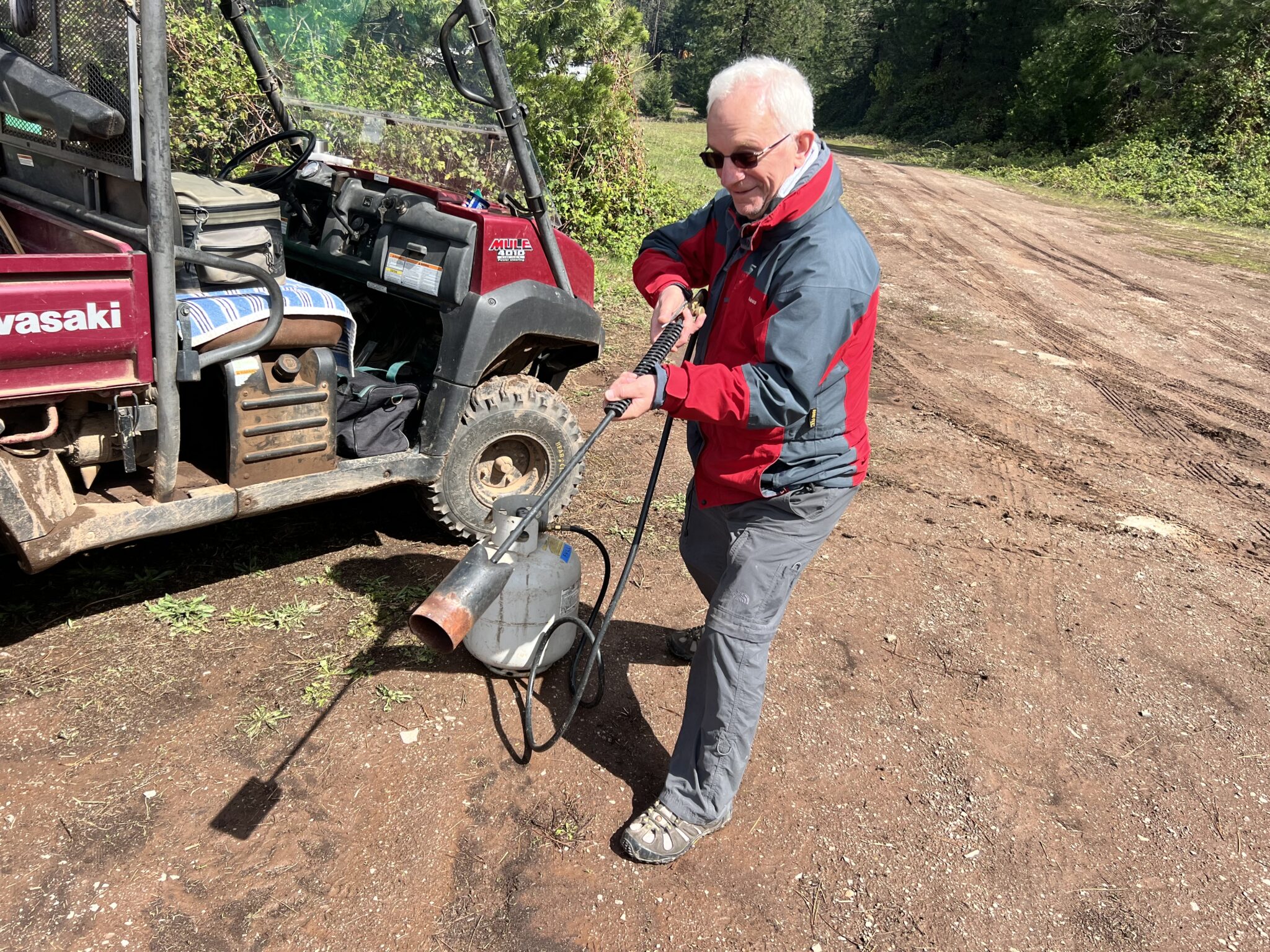 I convinced Simon,  the oldest resident of Henderson Springs, to fish the last morning with Wayne and I.   He outfished us and caught a 10 pounder drifting a size 12, thick,  red and black, copper headed, Chironomid five feet under a bobber on the shoreline.   Simon likes to high stick an indicator on a short line while drifting – he doesn’t put much action on the fly.  Although Simon is a man of few words, if any, he really gets on me.  He can at times be very rude.    He high holes us all the time and he’s always yelling for the net.   There was that incident involving Fish and Game about using his hook as a gaff”.  He was found guilty after pleading that he was handicapped and insisted his prothesis was not a fishing tool. .  Plus his parrot has a “fowl” mouth and always tags along.  Simon fishes old school fiberglass and was sporting a Paddock Lemon Drop 8 ft 4 wgt. 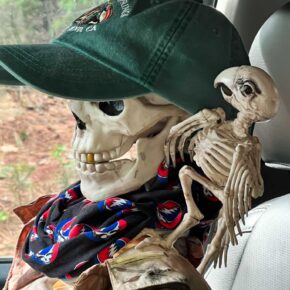 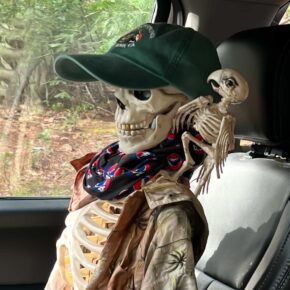 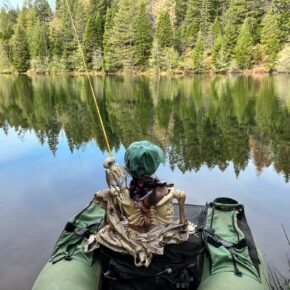 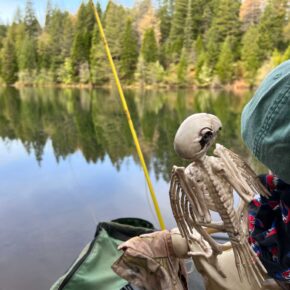 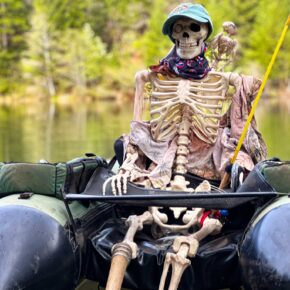 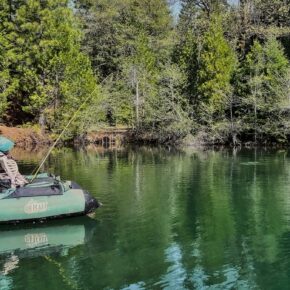 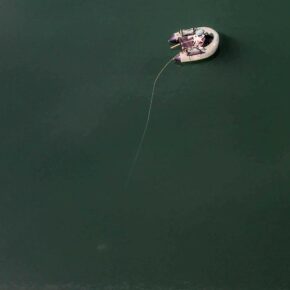 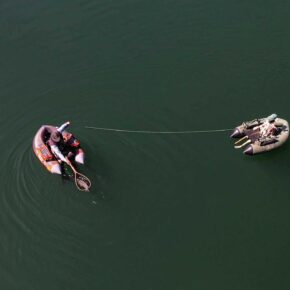 It was a great trip and I really enjoy this group’s company.  When good friends reflect on the world in front of warm fire in cold weather after a great day of fishing discussing politics and the war in Ukraine,  it reminds me of the old days when the left and the right could discuss and find common ground without becoming enemies.

“The person who agrees with you 80 percent of the time is a friend and an ally – not a 20 percent traitor.”  – Ronald Reagan