Monday April 25, 2022   There has never been a day when Frank, Steve Santucci, Brian, Dan Blanton, Vaughn, and Richard were all out on the Forebay on a Monday. I got to the lake at 8:00am and I knew I was late when Brian, Vaughn and I all pulled up to the Cottonwood Launch at nearly the same time while Frank and Steve were coming in.   I was happy to see Steve but apparently something was amiss with Franks Boat that forced them to come in. Franks boat and Tims boat were hammering a bunch of stripers at the Power Plant before I arrived at 8:00. They were already in double digits with a couple big ones according to Steve Santucci.  Franks Bilge pump was  suddenly working overtime  and they left some hot fishing to avoid sinking.   As I put my boat in ,  Frank was grounding the boat on the ramp.   I offered to trailer them up to check the hull as I was putting my boat in but Frank was ready to leave and got his boat on his own trailer.  I stuck around to see if Steve wanted to get into my boat if Frank left. Frank got the boat up on the trailer and there were no hull breaches. I knew instantly what was wrong when I noticed water coming out of the live well drain. A couple years ago, I rebuilt my livewell to hold refrigerated water. The drain hose disconnected one day  while fishing and water came in from the drain hole that sits next to the drain plug under the water line. Frank didn’t have a plug that would fit so I built him one out of a bolt and some rubber pressure tape. We all launched around 9 and I was anxious to catch up. Tim and Mason had over 30 and I was fishless till about 11:00 am. Most of my day was spent hunting for schools. I did not want to blind cast. The forecast called for calm all day, but the winds picked up in the afternoon. Most of the boats launched and went to the powerhouse, so I decided to hit the trench where I saw those big schools of fish Friday. After alot of searching, I concluded that the schools weren’t there so I went down to the end of the Medrious Rock wall to go look for the beast. I thought my sonar was broken because I couldn’t find a school of fish anyware. From there I decided to fish along the wall. I blind casted the wall an hour with no hits and decided to check out the flats near the group campsite. I found a few schools in 10 feet of water and managed a couple there. From there I went to the powerhouse and found Brian anchored up near the rock wall of the powerhouse where Frank, Steph and I once caught a hundred stripers. I watched Brian make quick work of three stripers and thought I had found them at last. I posted up next to him near the rope and started casting right to the wall and swinging. Of course the fishing turned off completely for the next hour. White caps started coming around the corner and I decided to give the trench one more try. As soon as I cut the motor and put the sonar in, I was surrounded by fish. It was blowing hard so I decided to run upwind and drift over the fish with an upwind cast dragging the bottom. I know I would have run out of batteries early if I had not switched to Lithium Phosphate batteries. My spotlock was working overtime to keep me positioned along schools of fish in the chop and wind.  I managed to stay on top of a couple of the schools for the last hour of the day and caught 8 more fish for a total of 10. I caught a couple nice ones for dinner and noticed that both fish had stomach full of tiny white grass shrimp.    There are potentially a couple types of grass shrimp in the forebay.   For sure there are big ones an inch long in the big lake and according to Ken,  this is the season for grass shrimp blooms.   I wonder if these stripers would hit a gigantic grass shrimp on a “float and fly”  setup especially where I marked schools in 10 feet of water.

I think everyone else left early tired from landing lots of fish except for Brian and I-the die hards and the last to leave.   Thank god I stayed and toughed it out or I would only have two fish for the day. It was a tough day for me but I left happy.  The fish seem to be temperamental these days and being at the right spot at the right time makes a big difference. 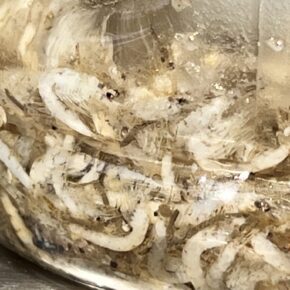 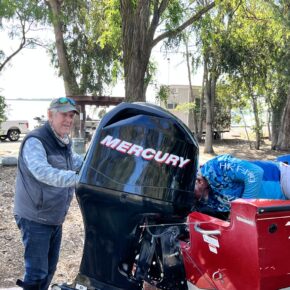 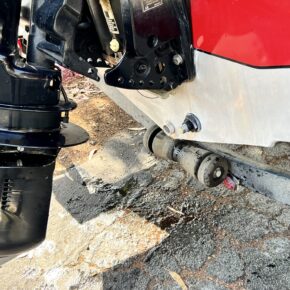 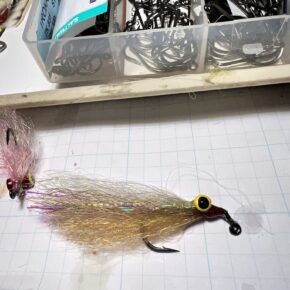 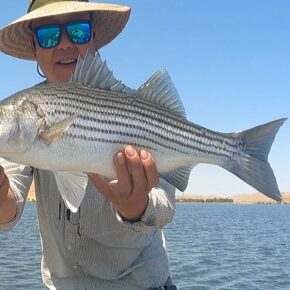 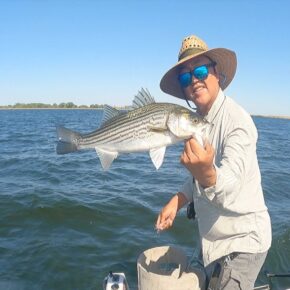 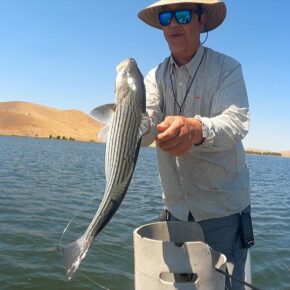 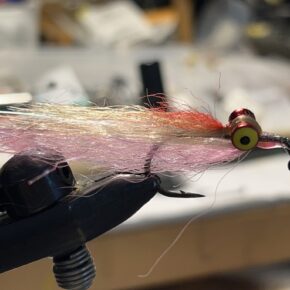