Wednesday May 4, 2021 – First Rule of Wednesday Fishing Club is don’t talk about Wednesday Fishing Club.   Its common knowledge to many that Dentists traditionally take Wednesdays off to golf.   If you’ve ever booked a tee time on a Wednesday,  you probably know this already.  Most doctors work a 4 day week and traditionally, those who take Wednesday off  have less stress cutting the work week in half.   Over the years,  I actually made it a point of working on Wednesdays and built our practice up seeing emergencies when dentist were scarce.   I cant remember ever taking a Wednesday off in years except for when Covid shot our office down for two months.    Gina and I were set to leave for Paris  yesterday when we were notified an hour before our Uber to the airport,  that our connection United Airlines flight was indefinitely delayed forcing us to rebook our entire trip .   This opened up the week and I decided to go fish the forebay today and Im glad I did.

I thought I might be the only guy out today and the wind forecast was really ideal.  Instead of pulling up to an empty boat launch at 8:00.   TIm, Frank, Vaughn, Dan Blanton, and Richard were already out.   Four boats were crowding the Powerhouse Inlet and three kayakers and float tubers were fishing the islands.   I was late!  Brian  gave up on the main lake and showed up in the afternoon.   The end of the report is that between all of us, over 250 Stripers were caught and only Tim and I fished till 5:00. Tim is a diehard forebay guy — first to arrive and usually last to leave.    Even Dan,  who is wounded and throwing a two hander was ripping lips like mad out there.

My morning was slow scoring minimum wage for the first two hours.    It started getting good  when I pulled up next to Richard Cook who was knocking the fish senseless when I pulled up to him around 11:00.  He got on a school of stripers that was chasing bait while everyone around him was fishing schools of spawning stripers.   It was surreal for awhile,, I and 4 other flyfishermen  who were catching a fish every 15 minutes,  watched while  Richard landed  20 fish in an hour.   I had to figure it out and Rich kindly told me he was using a T14,  a two inch fly, and a slower 4 inch retrieve and pause.   I mimicked his cast and strip and still no joy.   Finally I moved off the school I was fishing ,  closer to Richard,  and suddenly my  luck started to change.  I wasn’t the only one who was not hooking fish in some of the schools.    In hindsight,  I think some of the schools were feeding and some were into spawning.    The schools were numerous and massive and spread out all over the place.  They were clearly visible in the calm conditions.   At times I would cast to nervous water and the surface would  explode with fish.

I spent some time chasing the surface schools with topwater lures and flies wondering if they were Shad.   In the past, surface feeding stripers would pound a Zara Spook.   These schools did not and I thought for sure they were shad.   Plus I had never seen schools of stripers this big on the forebay. Until I got close and could see that they were indeed stripers and they were not feeding.   The calm water today really gave us a rare glimpse of the way Stripers Spawn in the Forebay.  First of all,  there was water being pumped in from Check 12 and the Outlet and I think the Dam was pumping as well.   Spawning is triggered by an increase in water temperature and generally occurs when water temperatures reach 60 to 68 degrees.   I measured 66 to 68 degrees.     Also,  I feel that the spawn is connected to the new of full moon which occurred the night before.    Unlike the schools of Stripers I saw chasing bait last fall,  casting into these schools can be unproductive .  Stripers do eat while spawning but don’t feed like they are slashing baitfish.   Both Tim and I noticed that the spawning schools would react to an “Angry Stripped”  fly better that a slower retrieve at times.    When the normal retrieves didn’t work on a school of fish,  an insanely fast strip would sometimes do the trick.    The Sonar was lit all day and there were even more huge schools that were deep .   There is so many fish in the forebay,  its unreal.   The Spawn is on and as Al Green would say. “lets get it on”. 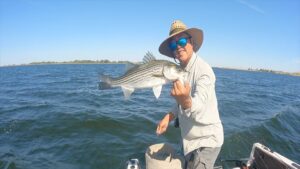 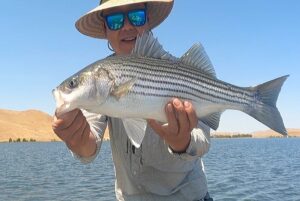 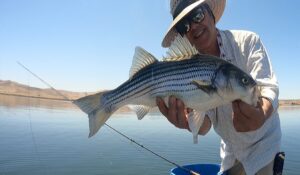 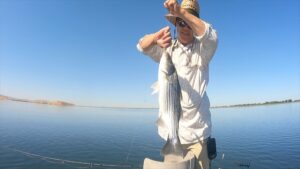 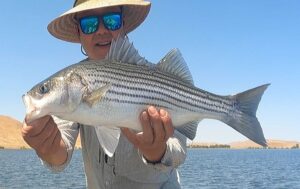 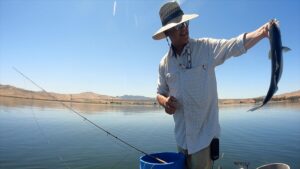 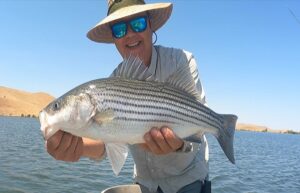 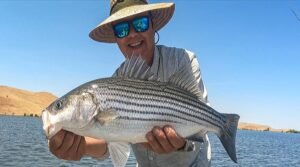 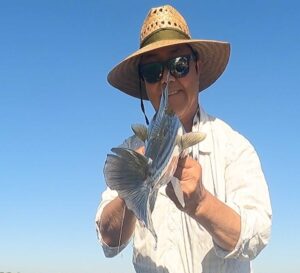 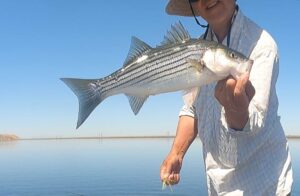 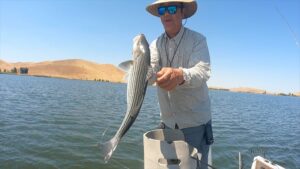 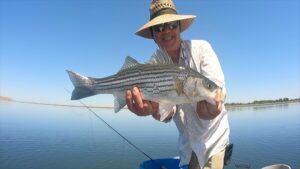 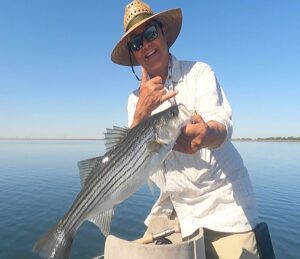 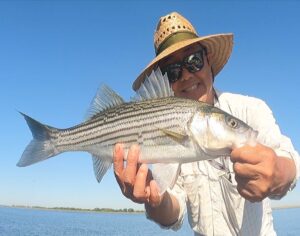 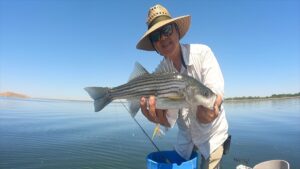 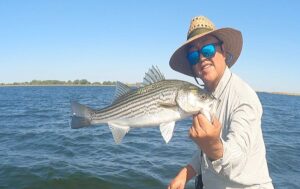 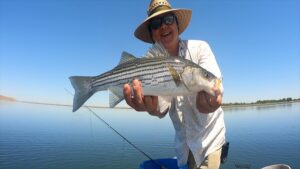 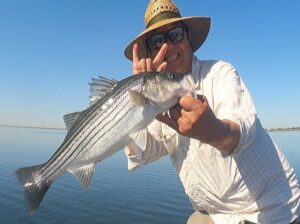 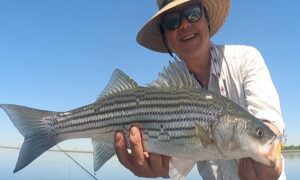 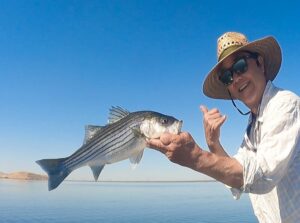 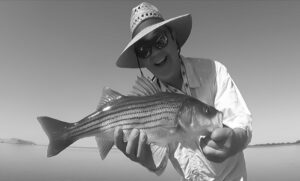 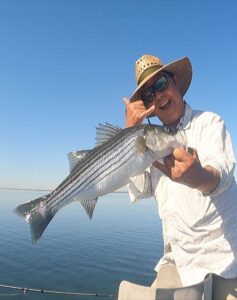