I sometimes think of the Trash Racks as 4 giant teeth in need of flossing.   Finally with a windless day in the forecast,  I had a chance to make good on my promise to take Richard to the Trash Racks for a real “session”.     My fellow veteran boat buddies, Tim and Brian, had the same idea and between the 4 of us we released well over 100 stripers fishing what might be one of the most perfect days on the lake in years.  At times all 4 of us were hooked up at the same time on opposite sides of the rack and we had 3 doubles in our boat. Some days just  cant be easily duplicated even on a day to day basis  because so many variables must be just right;  to name a few – wind, water level, water temperatures, current and water visibility.   The secret of a great day is to be patient and fish as many days as you can – take chances.

The lake was glass for most of the day.  The pumps were not on at the racks but the sonar showed massive schools of American Shad circling the pillars at 30-80 feet thick.  I could see on the Panoptix  schools of stripers cruising the edges of the American shad  breaking out groups of the school and pursuing them .   One of the best things about the racks is that the only structure in the lake that holds fish in a concentrated area even thought that area is the size of a football field.   Tim, Brian and I  approached the racks in fighter jet formation and took positions as far apart as we could get and caught fish consistently all day.    Big (20 inch plus) school stripers would move past one of our boats  as they chased  bait   all around us moving around the structure.

I used the deep fishing condition to test out  Fathom and Sonar full sinking shooting heads.  After a couple fish on one of our new SA Sonar lines,  it broke at the loop on a fish!   Both lines sunk faster and deeper than our t14 OBS lines,  but I just couldn’t get use to the angle the lines fished at 40 feet.    For once I preferred the shallower entry of the line of a t14 OBS over the nearly straight down presentations of the Fathom and Sonar.    Maybe fishing on a platform to keep the rod out of the water would be better but fishing those sinking lines,  the rod is almost pointed straight down with most of it in the water making feeling light hits harder.   The fish were not slamming the fly yesterday.   We had lots of light hits and only a few returns.  Lots of fish were caught on slow short retrieves and long pauses.   I caught many fish on the pause after the Syn Snap and two strips.

My favorite lines fishing 30-40 feet deep  are the t14 OBS integrated and the OBS t14 shooting head on braided mono shooting line .    The t14 integrated sinks faster but stretches more on the set whereas the Braided Mono Shooting line OBS t14 fishes straighter and with less stretch even though you have to wait longer for it to sink.   We lost quite a few on weak sets because of stretchy line yesterday. 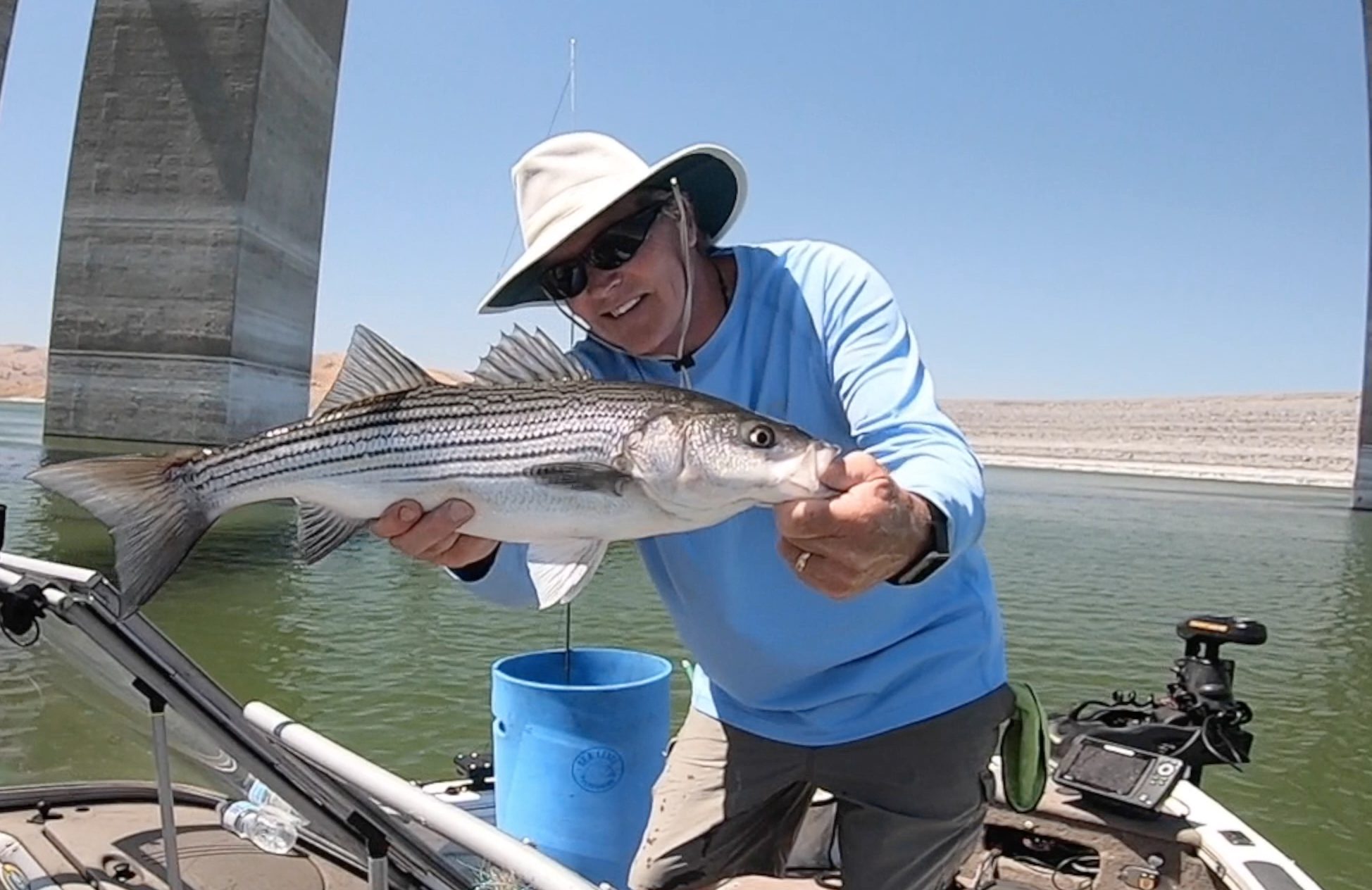 It’s been a long time since I was still sore from fishing the day after.  partly because of dehydration, I got cramps in the afternoon in the elbow,  wrist and hands.  The stripers were strong yesterday bending our 8 wgt rods into the water all day.   Richard is a fishing machine.  Every time I looked over at him,  he was hooked up.   There is no doubt that Richard truly enjoys stripers having fished Pyramid Lake on great days when he lived near it.  He’s been around and fished enough know.   You have to love a guy who know the words to “Up Against the Wall you Redneck Mother”  and sings it as he  casts to the “wall” of the trash racks.   RIchard has a very unique strip. It reminds me of the way Eric Clapton plays the guitar.  He’s got a slow hand but steady and paced.  He works the fly down by pausing to let the fly sink deeper after stripping and ends the last 28 feet of this cast fishing nearly straight down.  He caught lots of fish with the fly under the boat and so did I when I started copying his strip.  Richard definitly has striper game.   Setting on fish directly under the boat 30 feet gave me a cramp in my wrist and elbow in the afternoon. It made me realize that most of the time I set by turning my body vs wrist, arm, shoulder only when the fly is out.  Setting on Stripers for 50 years, my strike has changed like my golf swing has to compensate  for  flexibility and strength changes with old age..

Today was the first day for the new Panoptix L34 Transducer in forward mode.   The images were sharper that with the old transducer.   I found it educational to watch stripers chase out groups of shad form the main schools.   The Stripers feed around the schools of American Shad and are moving very fast. 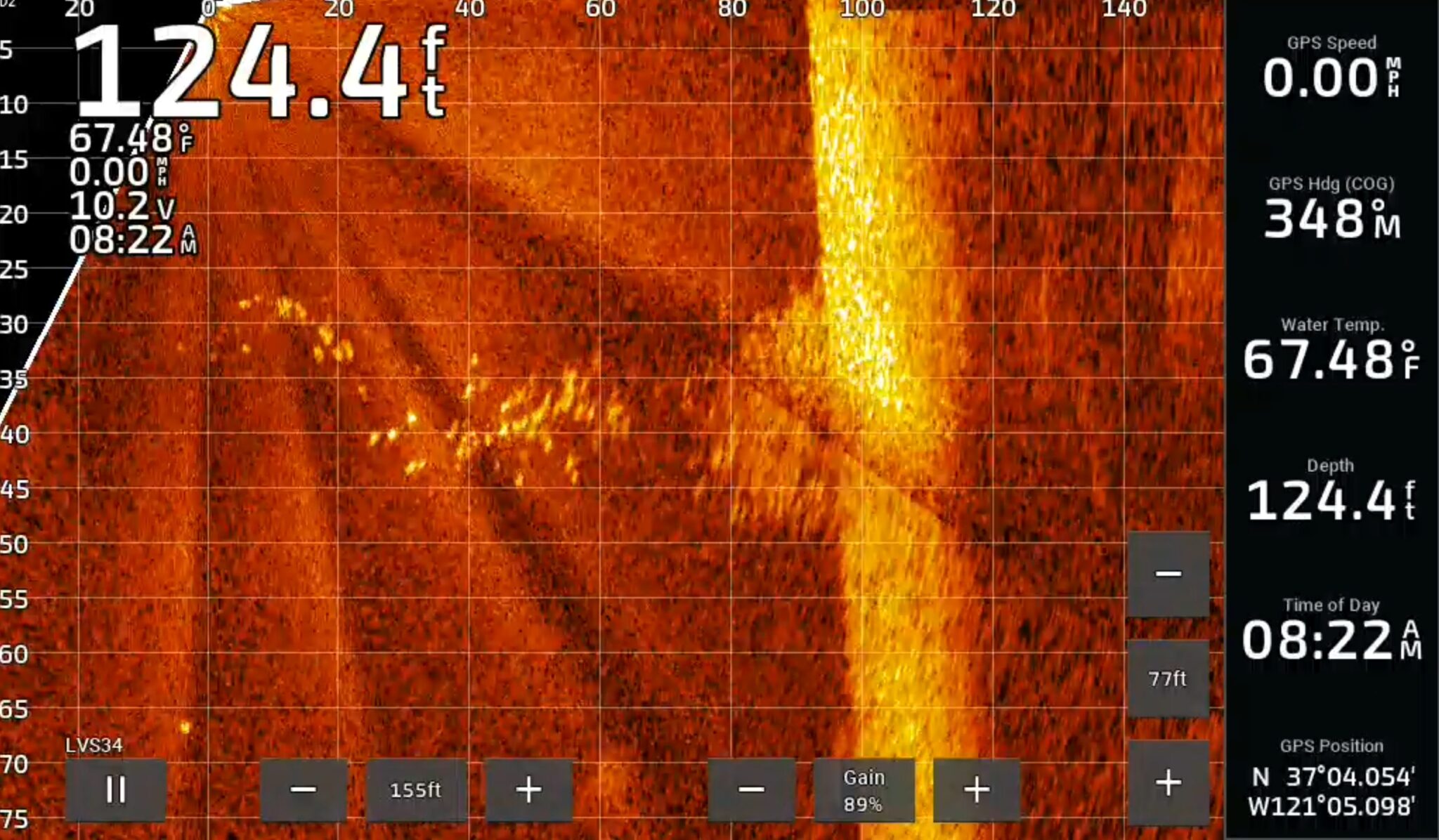 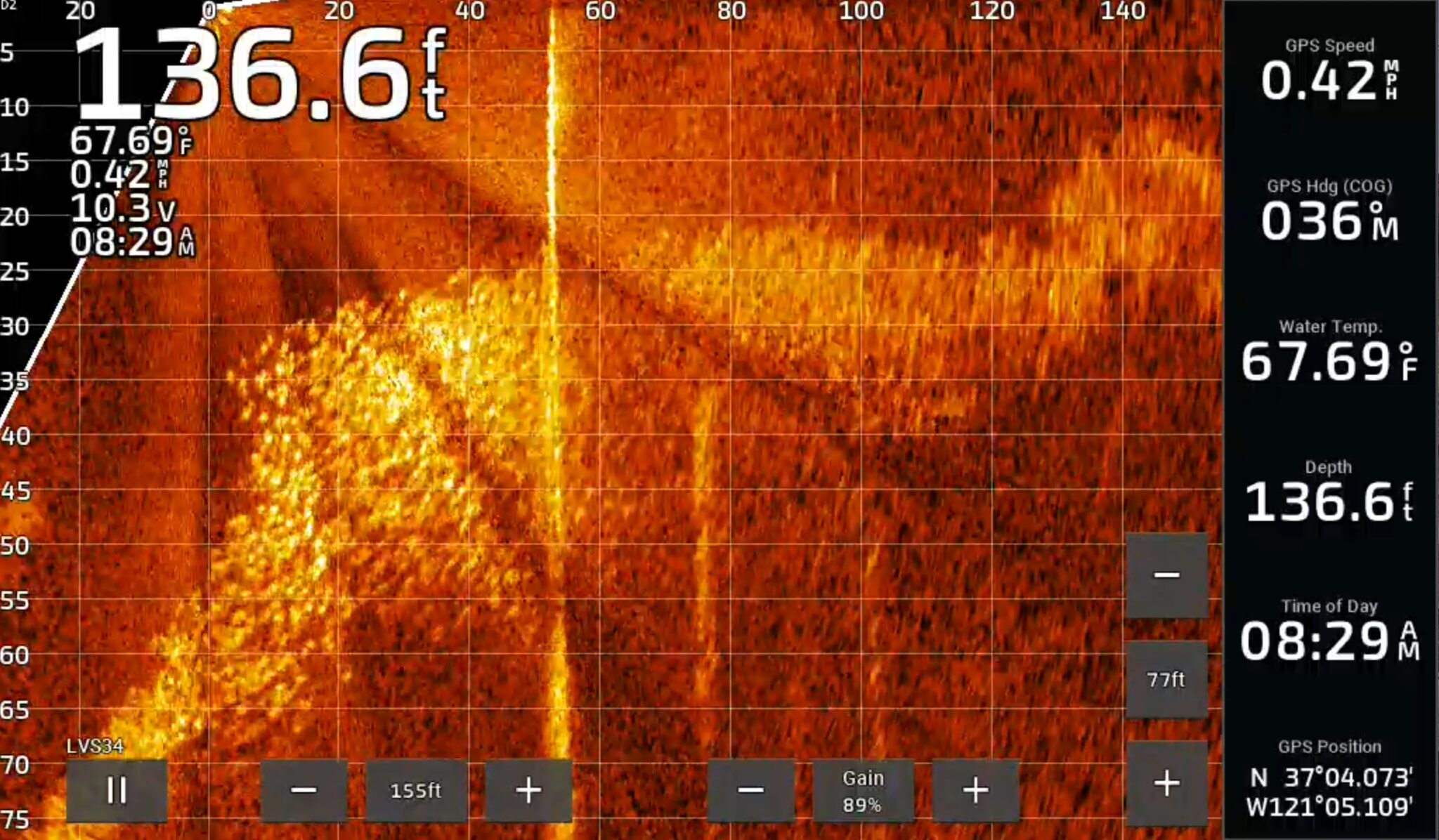 We fished till 5pm and on the very last drift,  Richard hooked a huge fish that broke his leader at his loop knot to the fly.   What a way to end the day.  The most memorable fish of the day was the one that got away.   In editing,  I noticed the monster wasnt that deep and Richard wasnt stripping fast.   The fly was moving with the drift on the pauses and probably only about 15-20 ft down.  Small Fly as well. 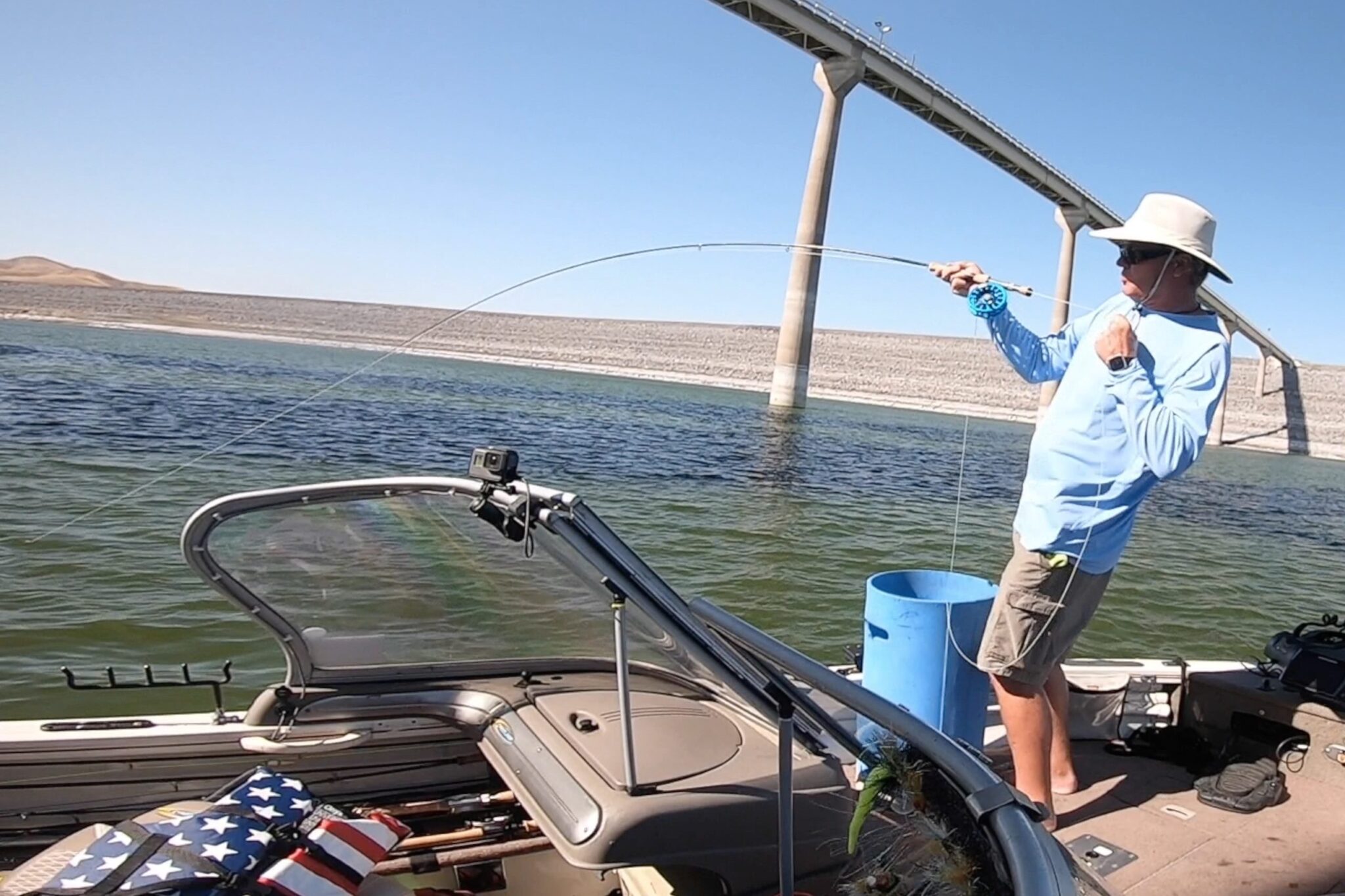 It is a long boat rider from Dino to the Racks and even longer with 10-15 mph wind waves.   Now that Basalt Launch is basically closed forever now that they have begun to raise the Dam.   It’s only a matter of time before they may decide to close the lake completely as they threatened to do last year.    I’m afraid our days are numbered fishing a structure that I have been familiar with my whole life.   At least the lake is open for now with only one launch. 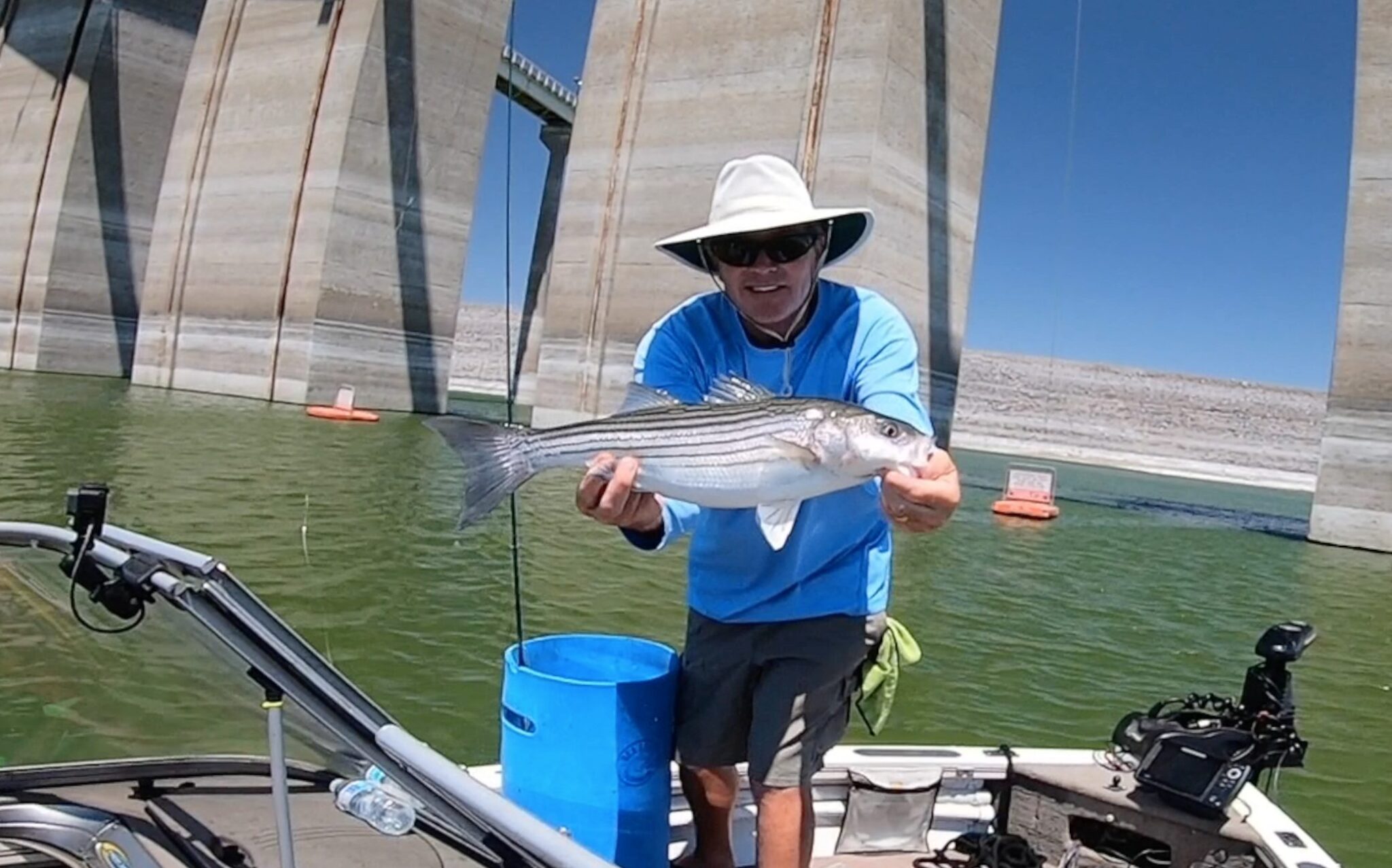 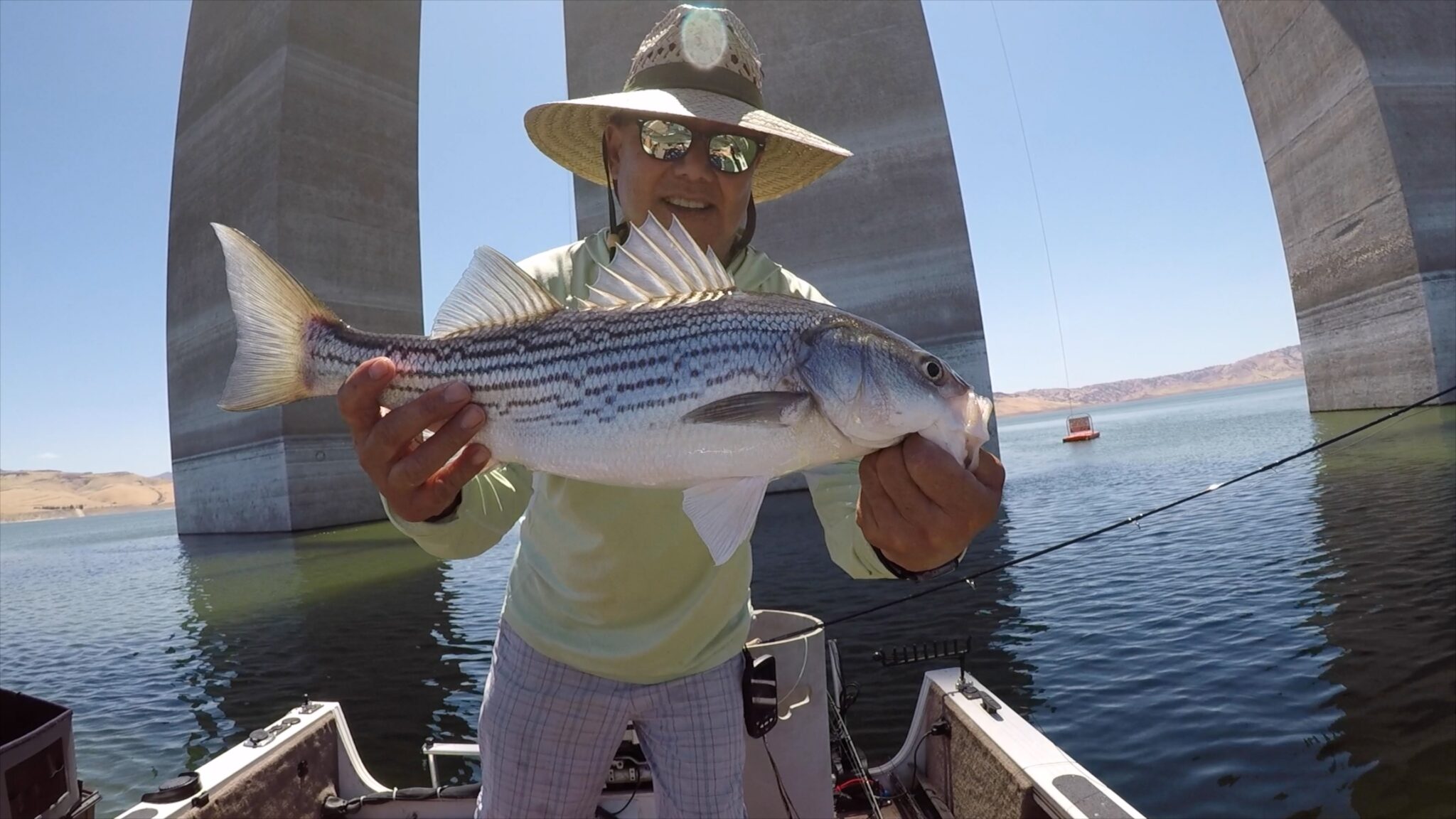 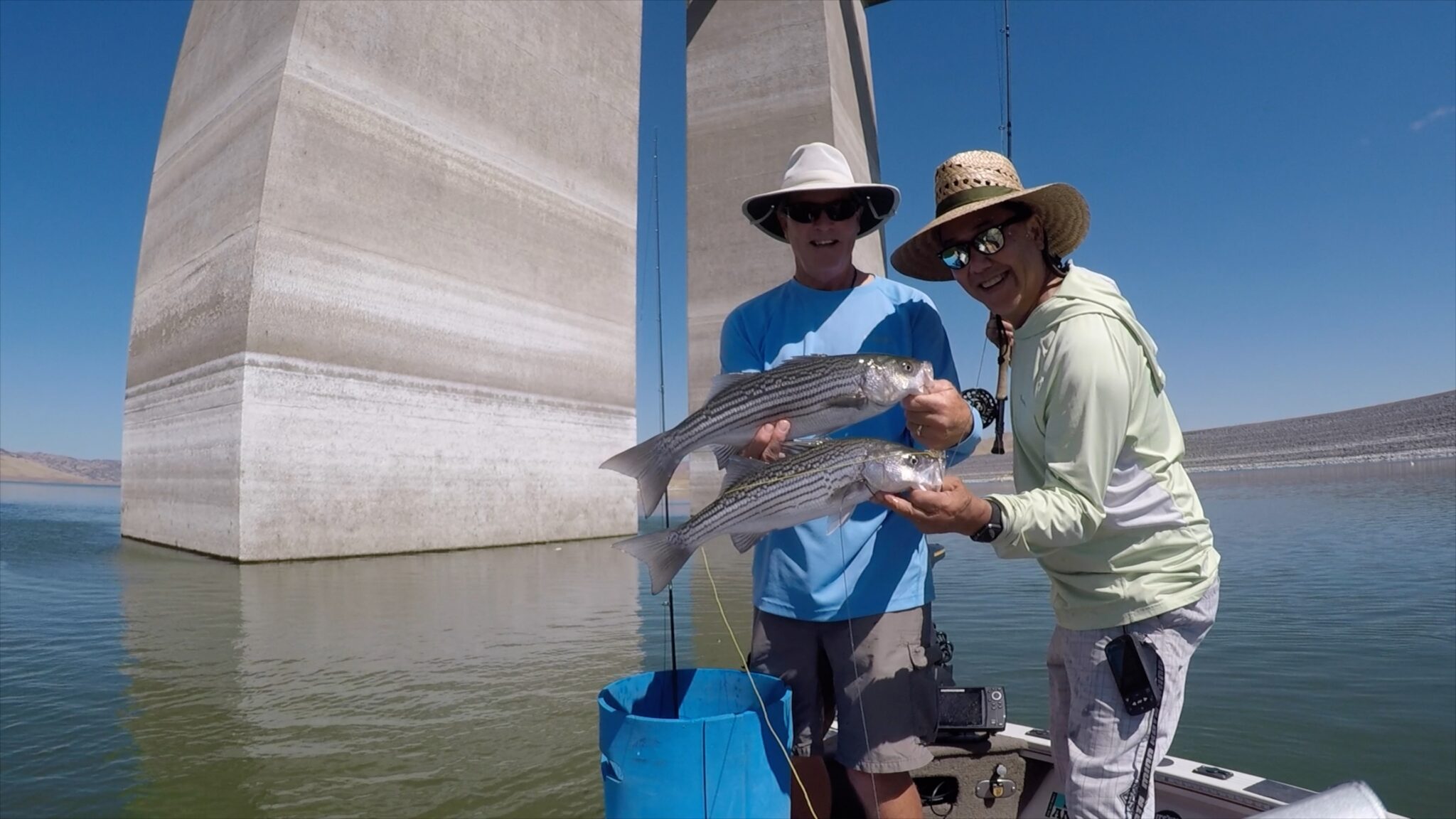 One thought on “Flossing the Racks with Richard”