Sunday Dec 4,2022   Hoping for a day just like  two days ago on the forebay,  I jumped on the opportunity to fish when the weather report changed.  Another calm west wind day  with no rain was predicted for Sunday.  The fishing has been good for me these last weeks and Im figuring out how to find the elusive schools of stripers on the Forebay consistently. They never seem to stay put even day by day and Ive been lucky enough to find them in spots I don’t fish much. Conditions today were different than any day these last couple weeks.   The water visibility is down from the rains and the weather is cold as is the water temps at 49 degrees.  Despite the cold,  there is sporadic topwater blitzes that sometimes occurs on calm afternoons and almost every evening half an hour before dark and into the night. Autopsy show that the fish are eating both Shad and Smelt.

I found fish today in 15-18 feet of water.   It seems the fish are hungrier in the shallow water than in the deep.   Perhaps this is wear bait go to hide.    I also noticed more action from fish around structures vs open water.    Although I did find some decent schools of fish in the deep.   It was tough to get them to bite even with slow retrieves.   The deep water fish are best after bait blitzes are done.   Fish will cruise an area after a blitz looking for stragglers or wounded fish.    The fish in the shallows were pretty hungry today and I even casts at a couple singles and hooked them using the Panoptix.   The weather changed in the afternoon and it was tough to position the boat for a good cast on moving schools of fish.   The biggest concentrations of fish I saw were in the trench between the islands and the rock wall corner.  Those schools weren’t there two days ago. One of the advantages of fishing the Forebay instead of the Lake is that there is only a relatively few places to look for the fish and usually they are somewhere in a big way.

I caught fish all over the lake today but as soon as I started watching the 49r game on my phone while fishing, the bite picked up.  I caught over 30 fish today but more than half in the last three hours of the day.    I think the bite gets better when the wind picks up a little.   The surface disturbance makes it easier to sneak up on fish and also the schools tend hunker down around structure when the wind blows.

Using the Panoptix,  you can tell so much more about whats going on with the bite-like how you peal away half a dozen fish from a school when you hook a fish.  Fishing two in a boat ,  if one guy hooks up,  the other should always cast at that fish right  away.   If I get follows with no takes,  I switch up the retrieve.  Yesterday the fish wanted faster moving flies with shorter pauses to commit.    I noticed several times when I tried to long pause a fly in front of a following fish, the fish would turn away for good.   Its still a mystery to me that some stripers  just peck a fly after spending so much energy chasing it  and  others suicide grab the fly deep while its just suspended.  Its not accurate to think that just because you hook one fish deep, that all the fish in the forebay are on the grab.     I also noticed it was  difficult to get there attention at times.  I casted a fly at a big school slowly moving it through the fish without a single fish breaking out and following.   It reminded me of “The Walking Dead” where a tactic NOT to get bit was to walk  amongst the zombies mimicking there movement.  As soon as you spoke or acted afraid, the hoard would attack you – Fishing lessons from the Walking Dead.

At the end of the day coming in,  I saw some birds working the shoreline and saw some stripers feeding,  but it was getting late and I didn’t fish those area.   At least the evening bite seems to still be happening.    The Forebay is fishing great if you can find the schools.   Its like a game of Hide and Seek out there. 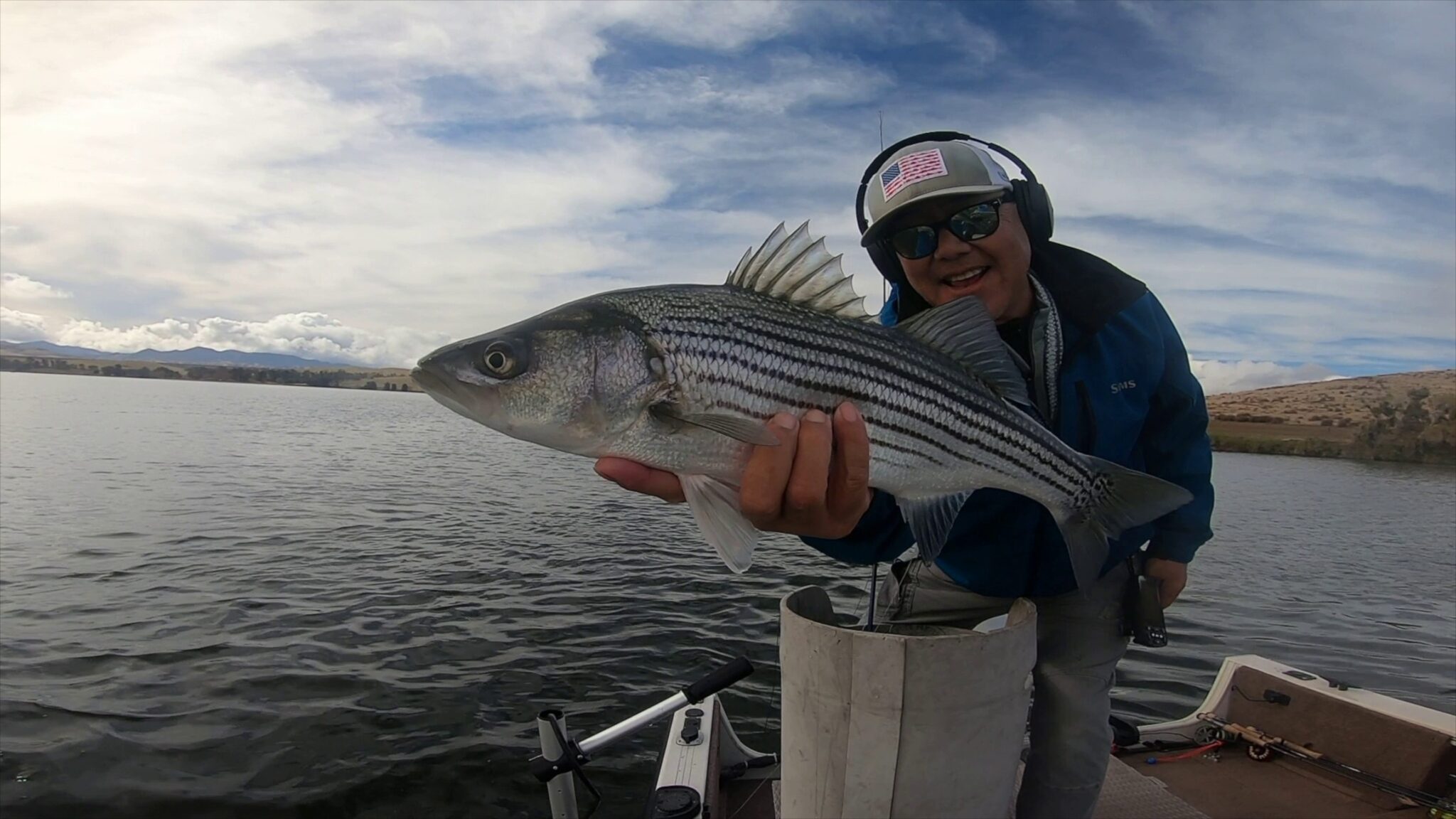 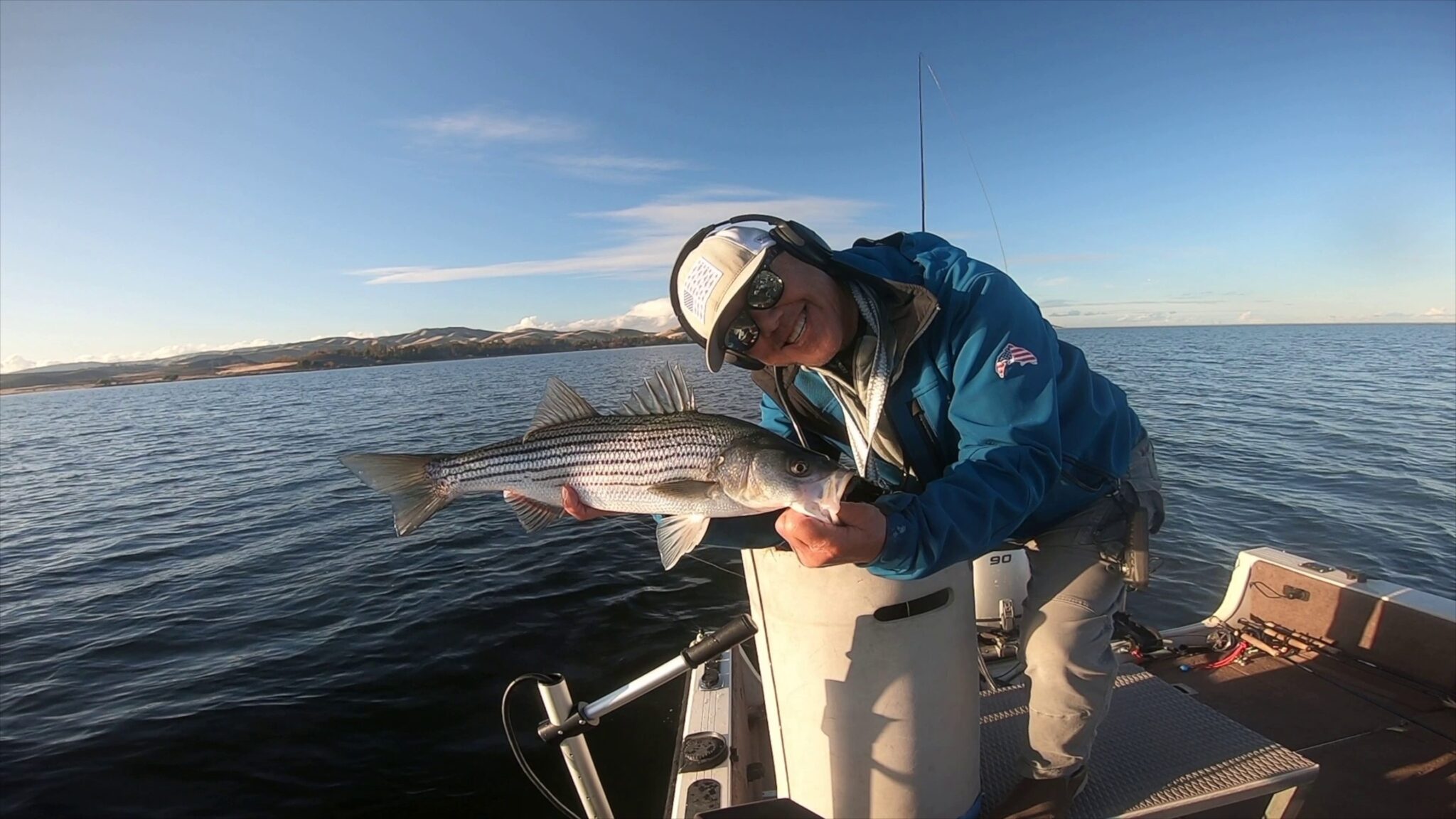 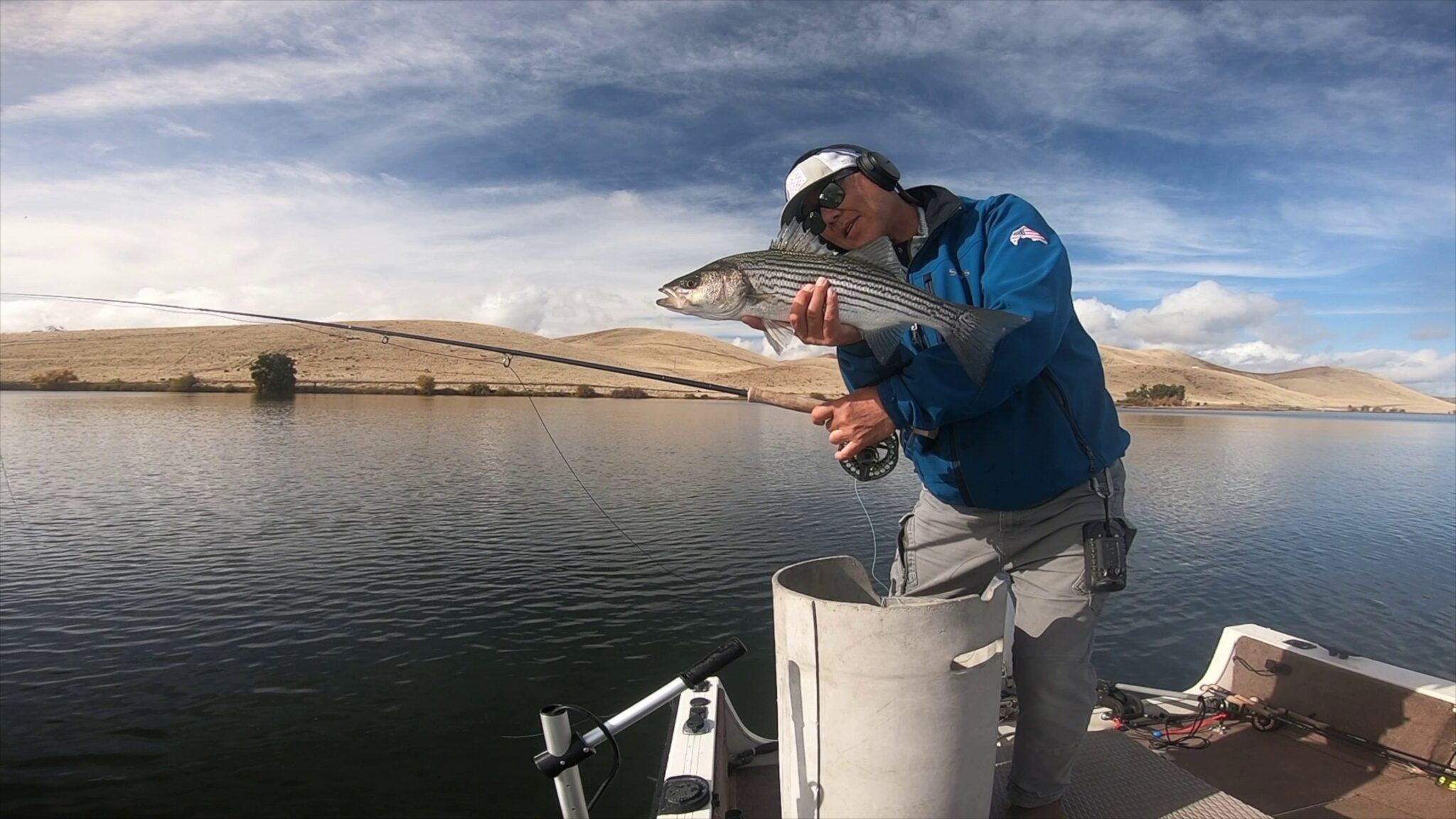 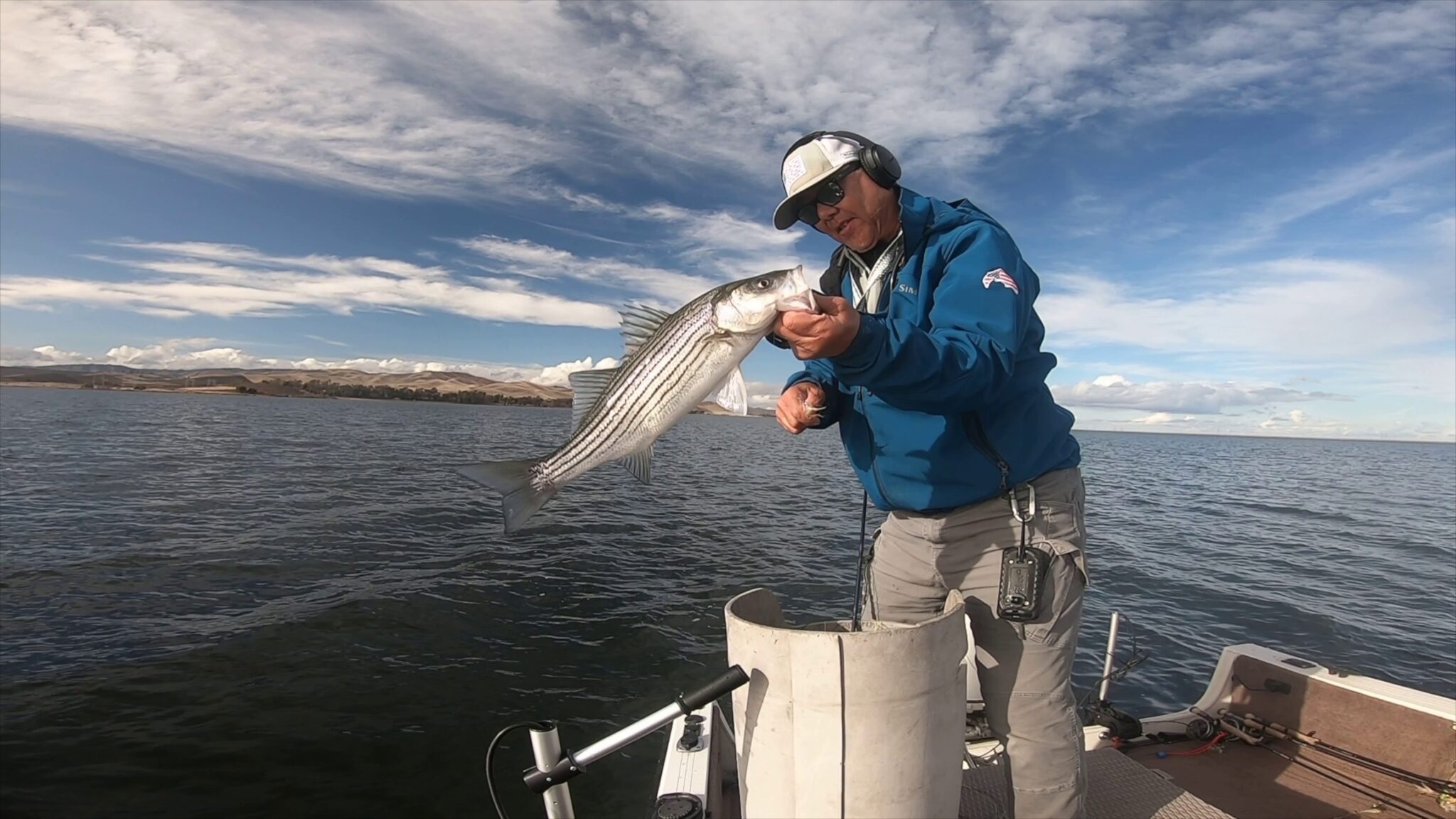 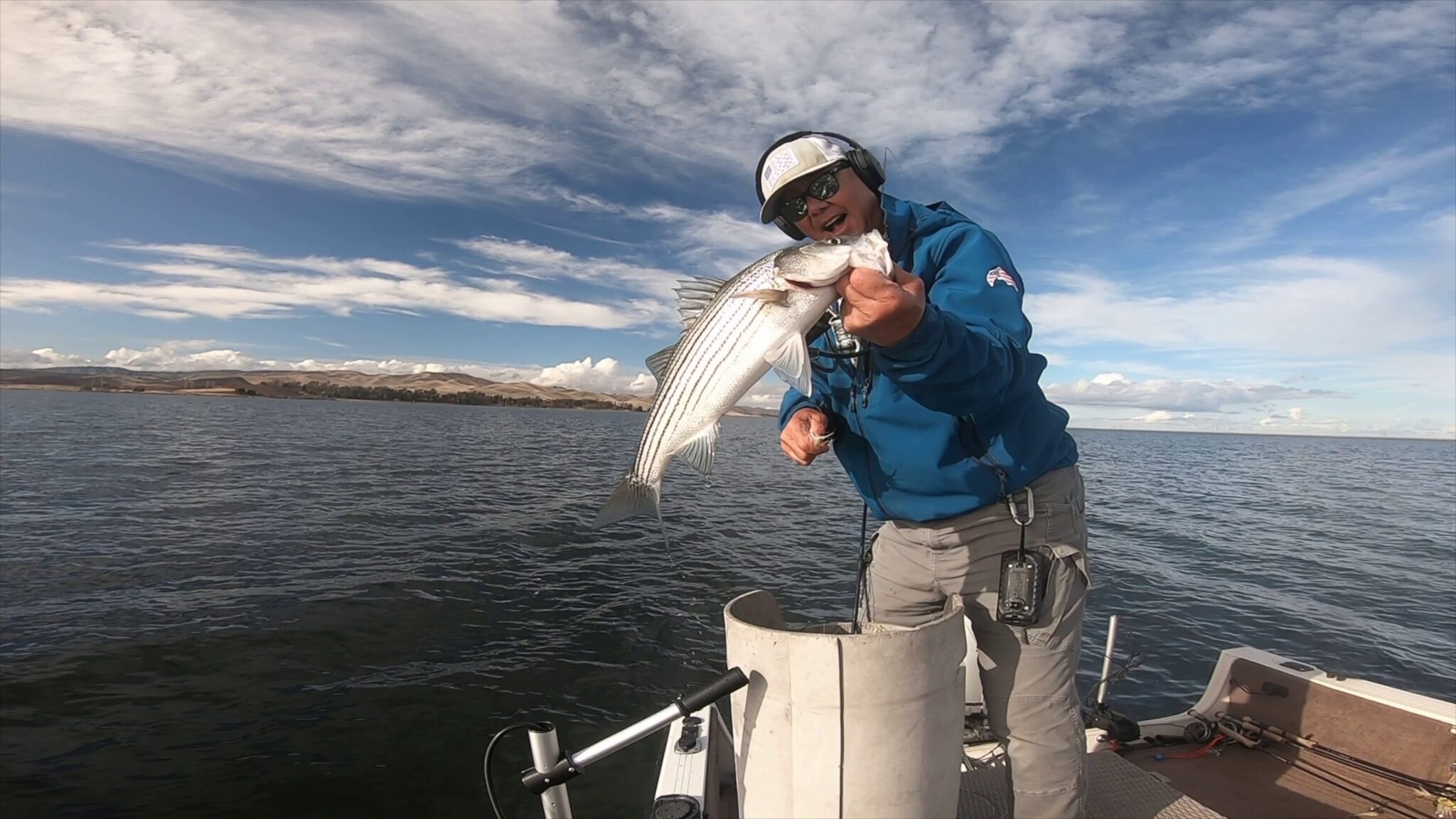 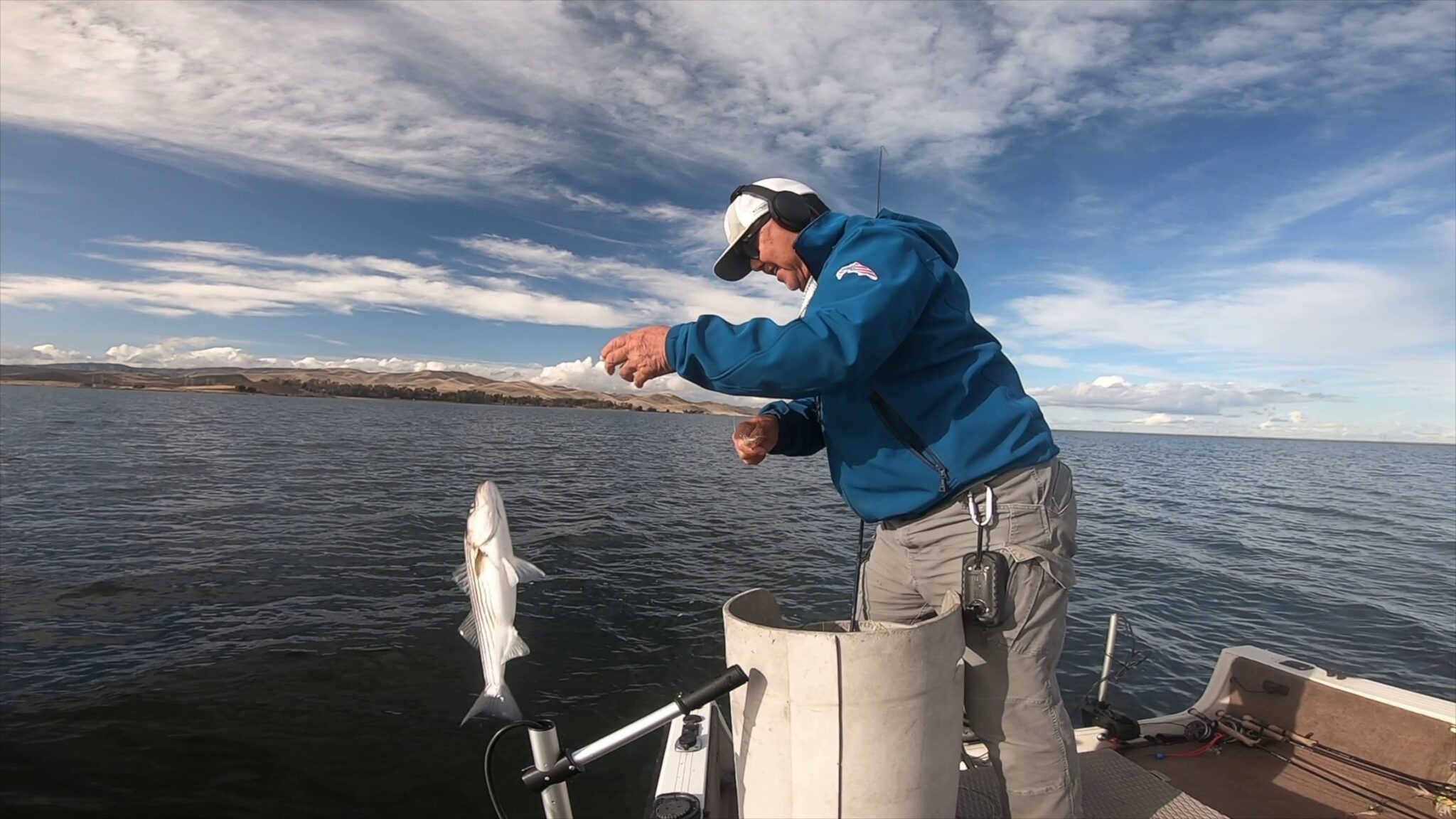 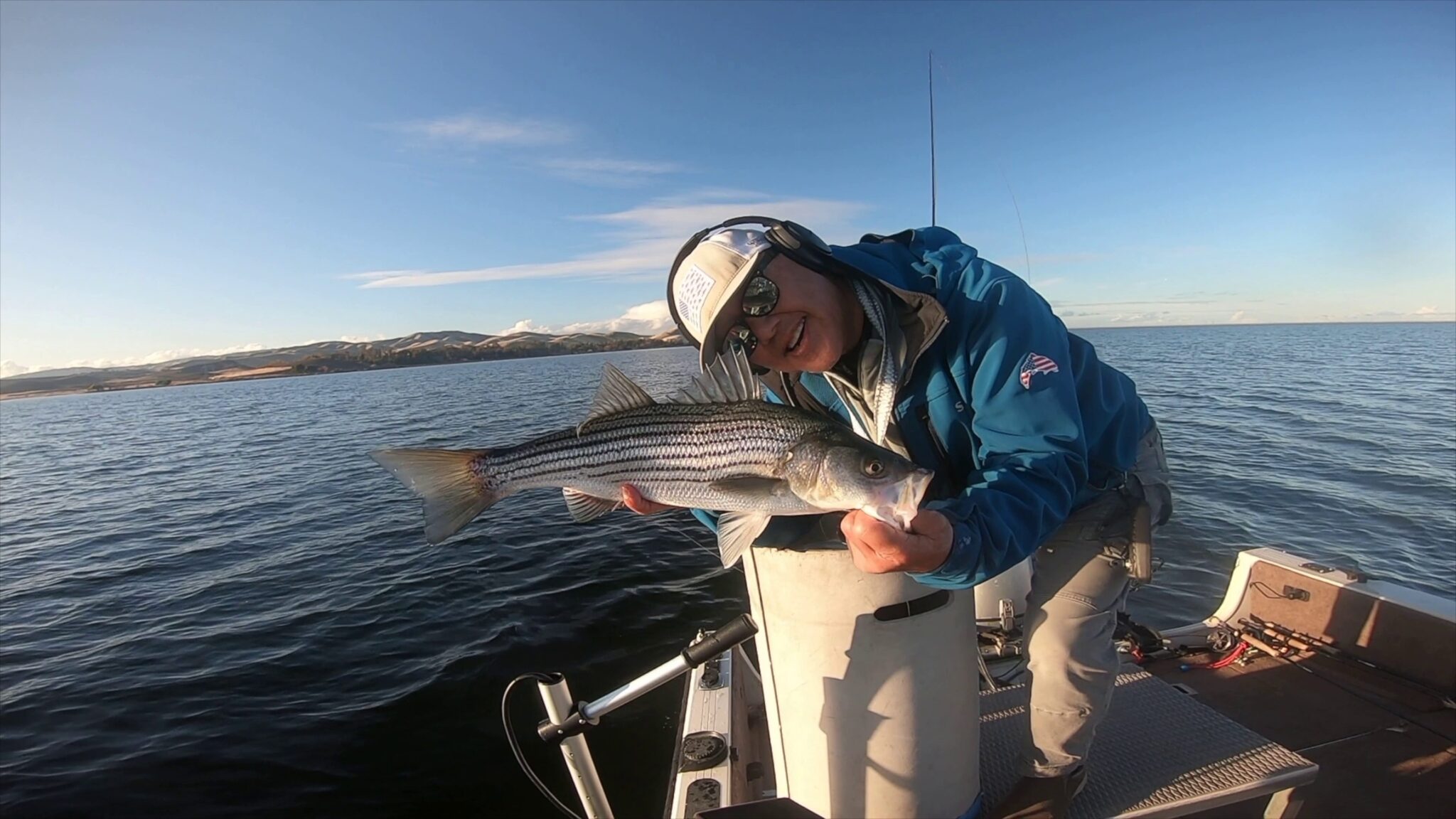