Friday Dec 2, 2022   Some work weeks can’t go by fast enough.  All last week seemed like there would not be a weather window to fish this weekend,   but on Wednesday a windless rainless day popped up on the prediction and I was all in to get back to those big schools of stripers.   I launched at the Forebay , only the 4th boat out to Bluebird Skies, calm flat water  and birds working the the rocks across the forebay.  It was a Christmas Gift of a morning – Perfect.

First stop was chasing the birds along the rock wall.   As I got close,   I could see that there were multiple  small  schools of bait and fish working  over a large area.   One of the advantages of a boat over a float tube is the ability to move to fish quicker. So many times in the past,  I’ve put the trolling motor on 10 and tried to chase the schools and birds.  Most of the time,  I was not fast enough to catch up with the moving bait and fish.  For more speed,   I now start my outboard and keep the trolling motor in  and pointed forward on 10.   In this position I can accelerate with the outboard  to 15 mph without snapping my trolling motor off.  Positioning on the the fish is easy with a Panoptix.   After fish crash the surface,  they sometimes hang out in the area looking for wounded fish.  Even though the surface action stops,  there seems to be a residual amount of fish in the area searching for easy food.   I managed to catch a couple fish from each boil like this.   It hard to believe that as a single angler that you can only catch a couple fish out of moving boiling school  bot in the 5 minutes it takes to hook and land two fish,  the school is lost without a trace.    Landing the fish as quickly as possible to get back out and keeping the motor running in the direction that the school is moving is the best I can do.   Multiple hookups in a boat also help to hold a school.     I managed 8 fish from 9am to 3 pm fishing these school.  Minimum  wage but lots of exciting fishing. 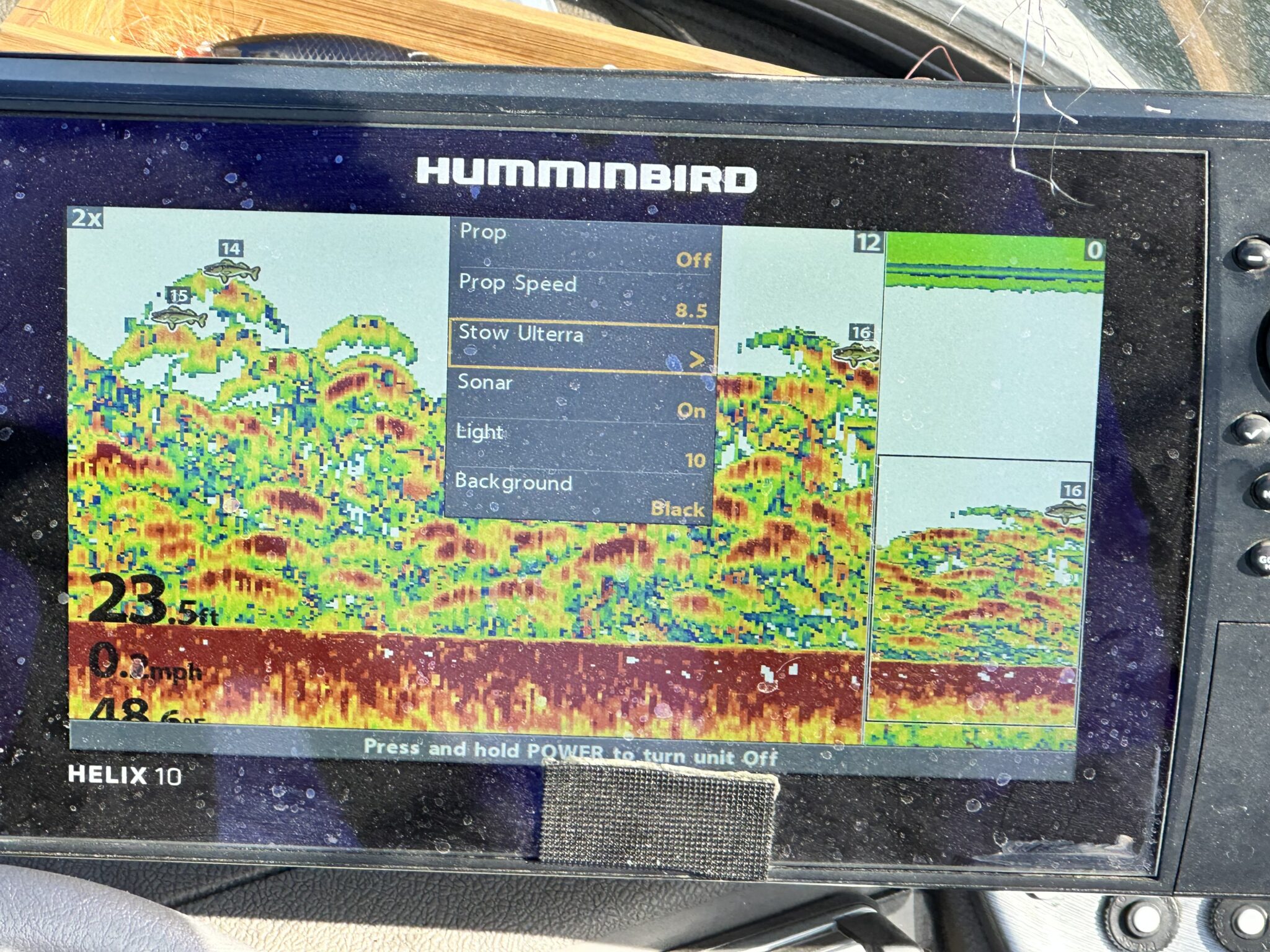 Around 3:00 I ran into Mark Won.   He starts later and leaves after dark,  fishing from his tricked out pontoon boat.    We had a nice chat about where the birds were working  after I had just fished fishing  Medeiros with very little luck .    He was fishing where I had seen the birds in the morning and said he was picking up a couple here and there but no big schools and no more birds.  I decided to go fish the flats near the campground for the last couple hours of daylight  and it paid off.    As I was fishing the campground flats not marking any fish,   I noticed bird on the opposite shoreline flying in circles without diving.    Frank C caught a couple great fish over there last week but I seldom fish that area much.   Its a big 10-15 ft  deep flat.     It was 3:00pm with overcast skies when I started fishing the flat.  It was darker with the cloud cover and I think the fish started working surface smelt earlier to my benefit.  Not steady but all across the flat,  I would occasionally see a tail or a working fish.   When you have lots of fish spread out on the bait cruising to eat,  it is  easy to put the numbers on the board.    On my first stop, I roll casted my Size 1 pinkish  Clouser out a couple feet off the boat to strip shooting line out of my reel when a striper rose up from the depths and inhaled it as it just began to sink .  For a second I thought of fishing a Gurgler which I had rigged up but I had a fish on and only an hour to fish.   In the next hour,  I landed 7 fish on the Clouser basically scanning the flats for schools of 1-3 fish or a boil and getting a fly near them.  Everybody was hungry on the flats but I had to say goodbye early at 4:30 to get to retagged before 5pm.   I can see a huge benefit of just fishing the forebay from 3:00 to 6:00 from a Kayak or Tube. I caught half my fish for the day in the last hour.   A Kayak would be better than a tube in my opinion if you could launch it from a car top since its faster for chasing fish.   Or maybe camping there overnight but Im not sure if the launch gate is closed at sundown preventing you from getting out.   Mark mentioned that he saw birds too far to kick to in the evening. . 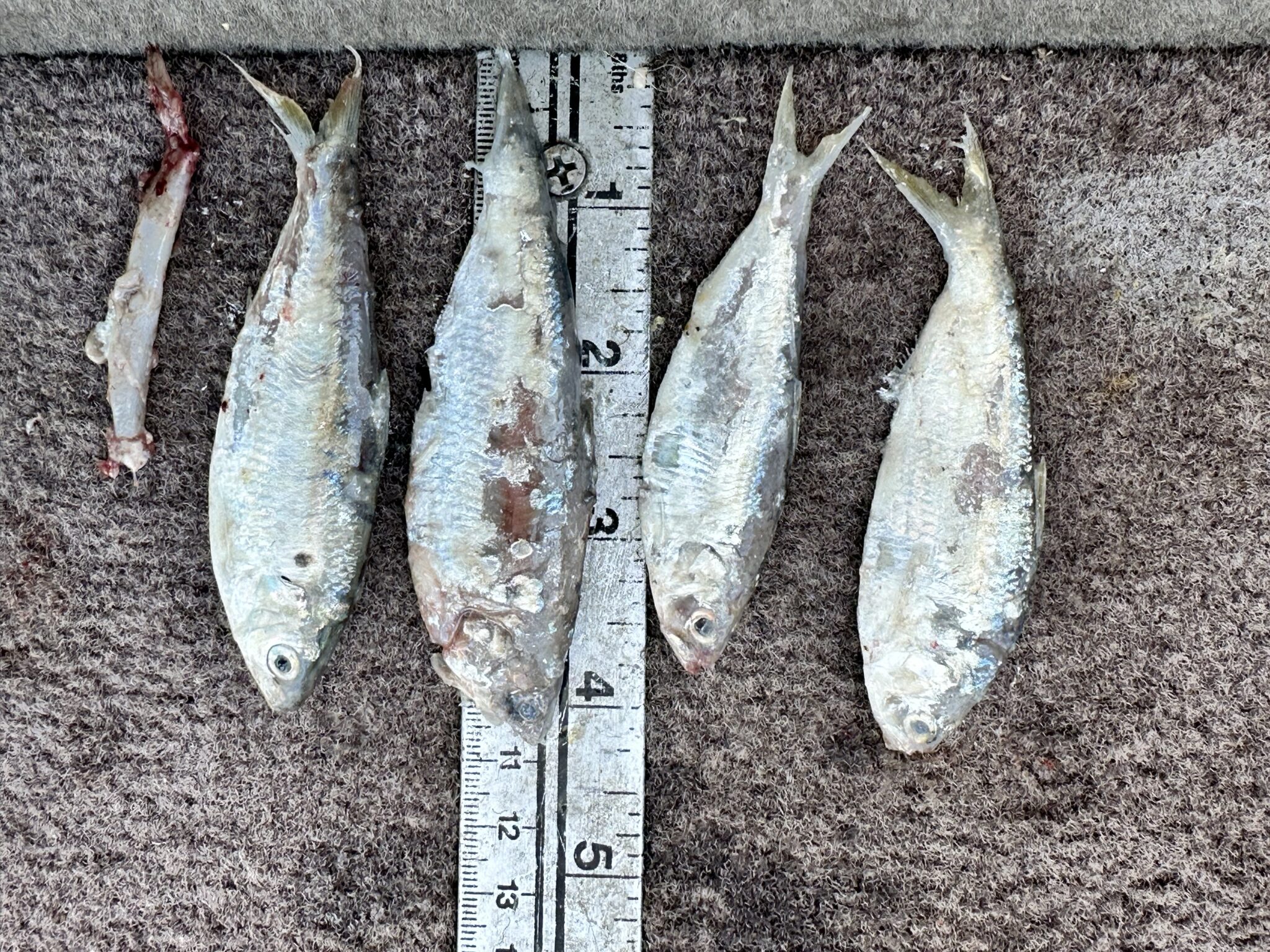 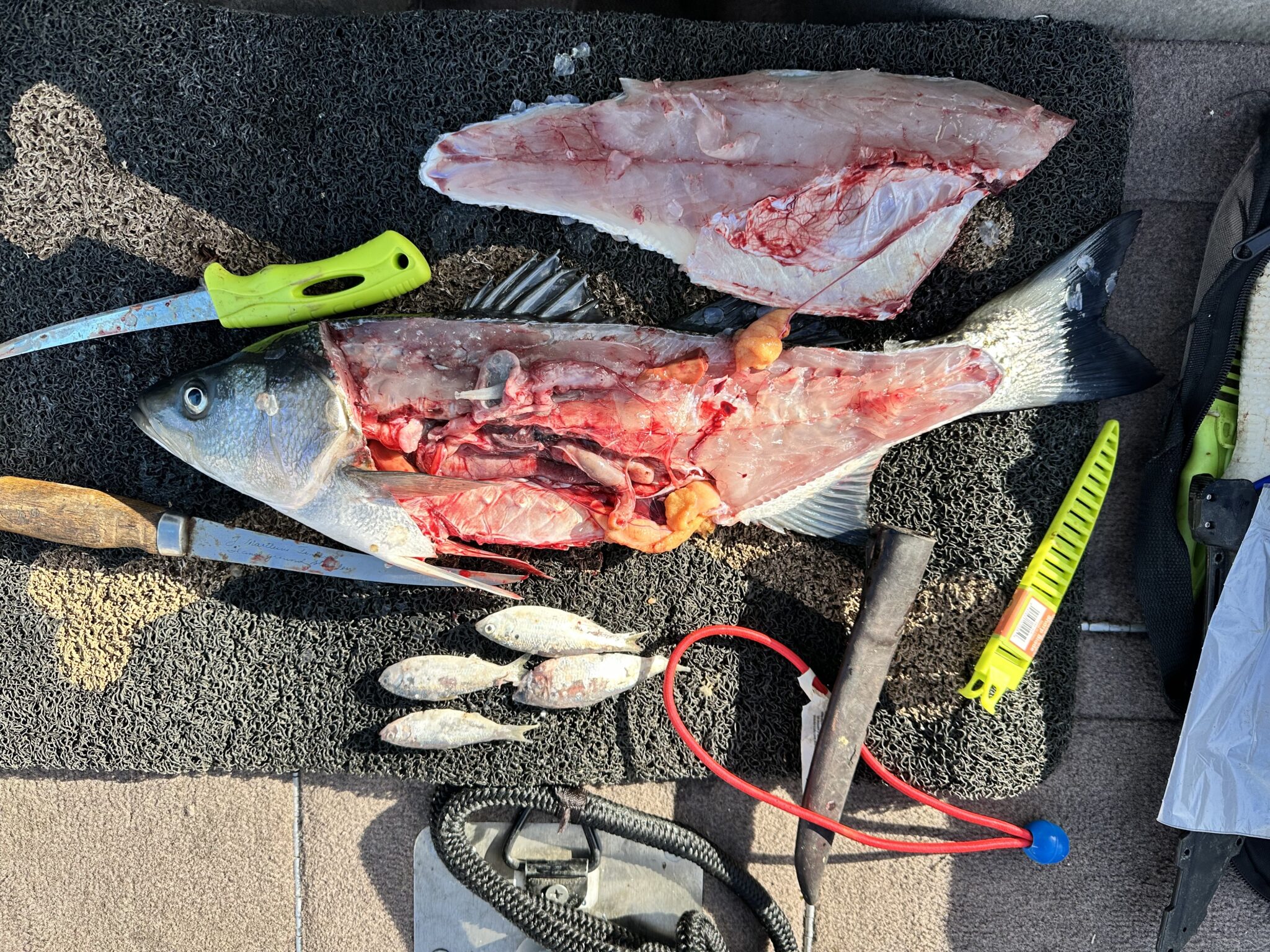 In the afternoon I hooked one fish so deep that I decided to kill it and eat it.   It was a fish that was feeding in the afternoon bird blitzes   The 22 inch striper had  four 4 inch threadfin shad and one delta smelt in its gut.   It’s a regular Minnow  Buffet out there.  Ive been fishing small 3 inch smelt colored clousers since fishing with Ken Oda a couple weeks ago.   Frank had some good luck on a 4 inch fly  of his own design last week but I  thought the fish were mainly feeding on the smaller smelt.    It possible that the afternoon blitzes are threadfin and the evening surface activity is the “slower”  smelt.   Lee Haskins made an interesting observation last week on Dan Blanton’s Board.

With so many smelt available, the stripers seem to feed for short, optimum periods, gorging on the bait. The late evening topwater activity, IN CERTAIN PLACES, has provided some incredible fishing!  Most of these stripers are over 20 inches, with most fish around 3-5 lbs.  Yes, you can locate these fish during the day, but they are very hard to catch. My guess is that they gorge once, or twice, per day, in the evening, and perhaps in the early morning (I’ve not fished the early am time to confirm this).  The stripers are staged in the general vicinity of the massive schools of baitfish. (Probably resting on the couch, like a post-Thanksgiving feast! Grin!)
They are not around the towers, or out on the flats, generally speaking.  The topwater sessions, I have experienced, have been truely epic, unlike anything I’ve ever seen.

On one occasion, I recall catching so many stripers on the gurgler, I simply quit.
Lee Haskiins

The Kayak and Float Tubers know! – The Boat guys leave the dance early.   I think the weather predictions just changed again a minute ago.  No rain and clam winds for Sunday and Monday? 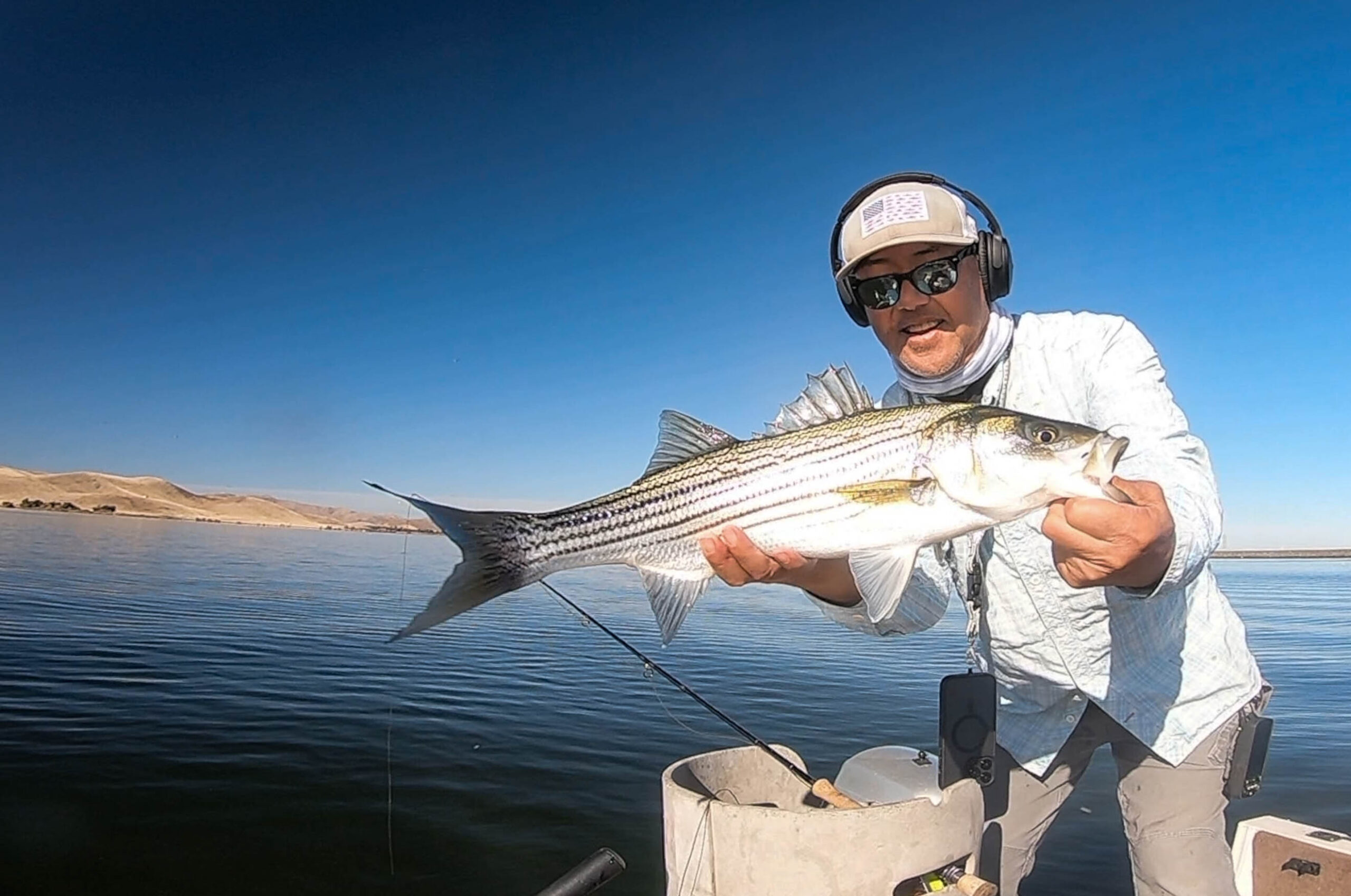 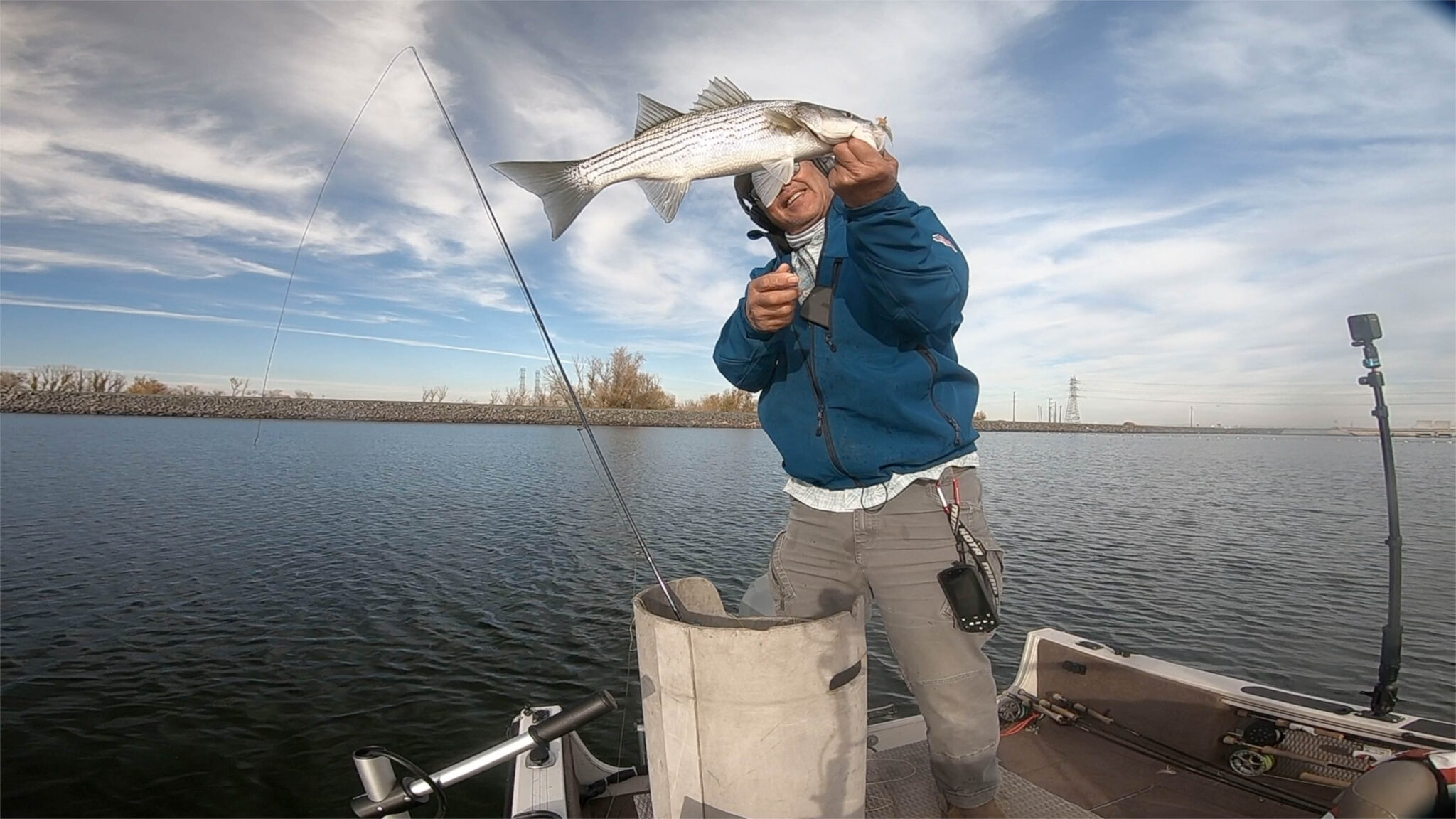 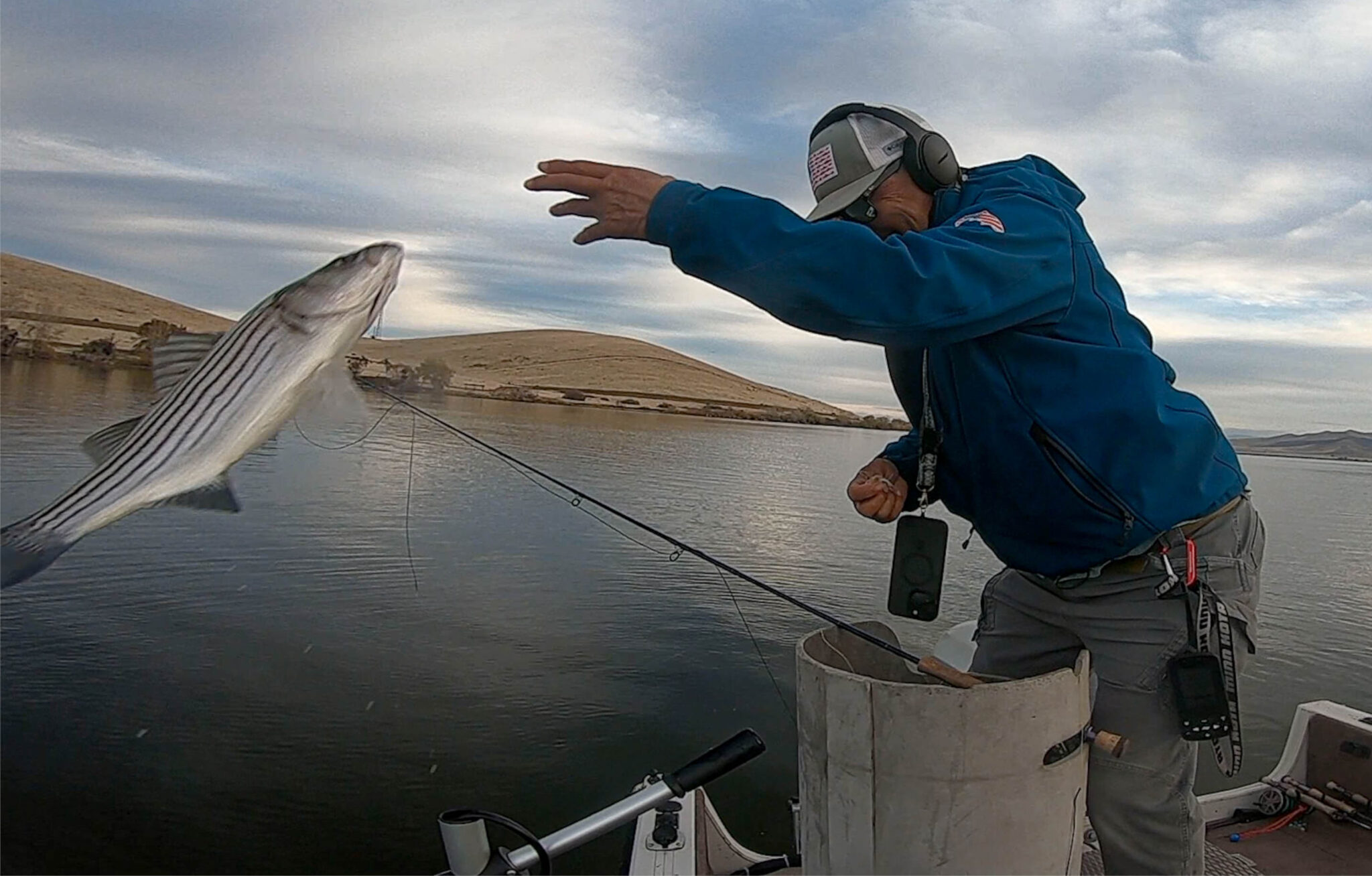 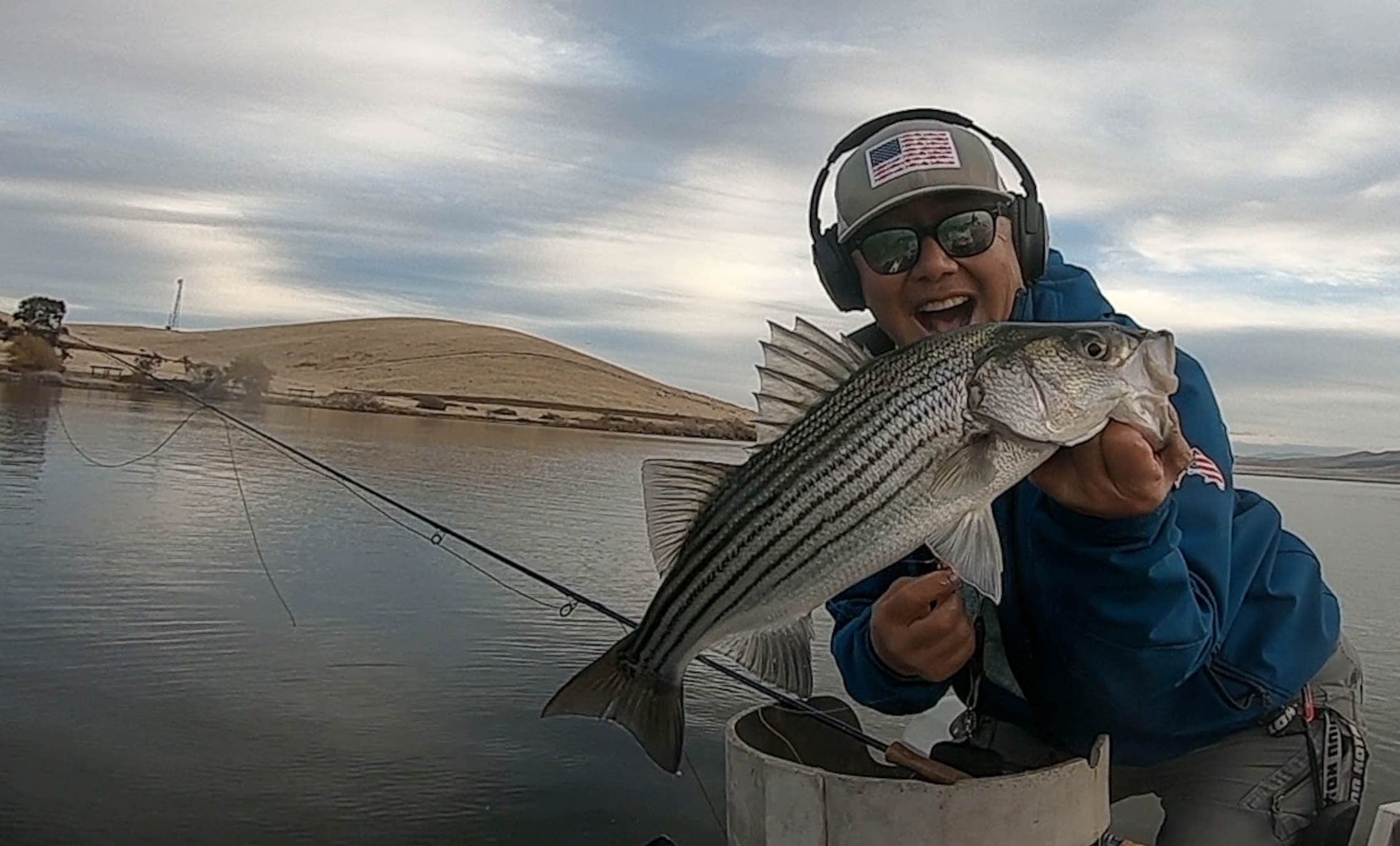 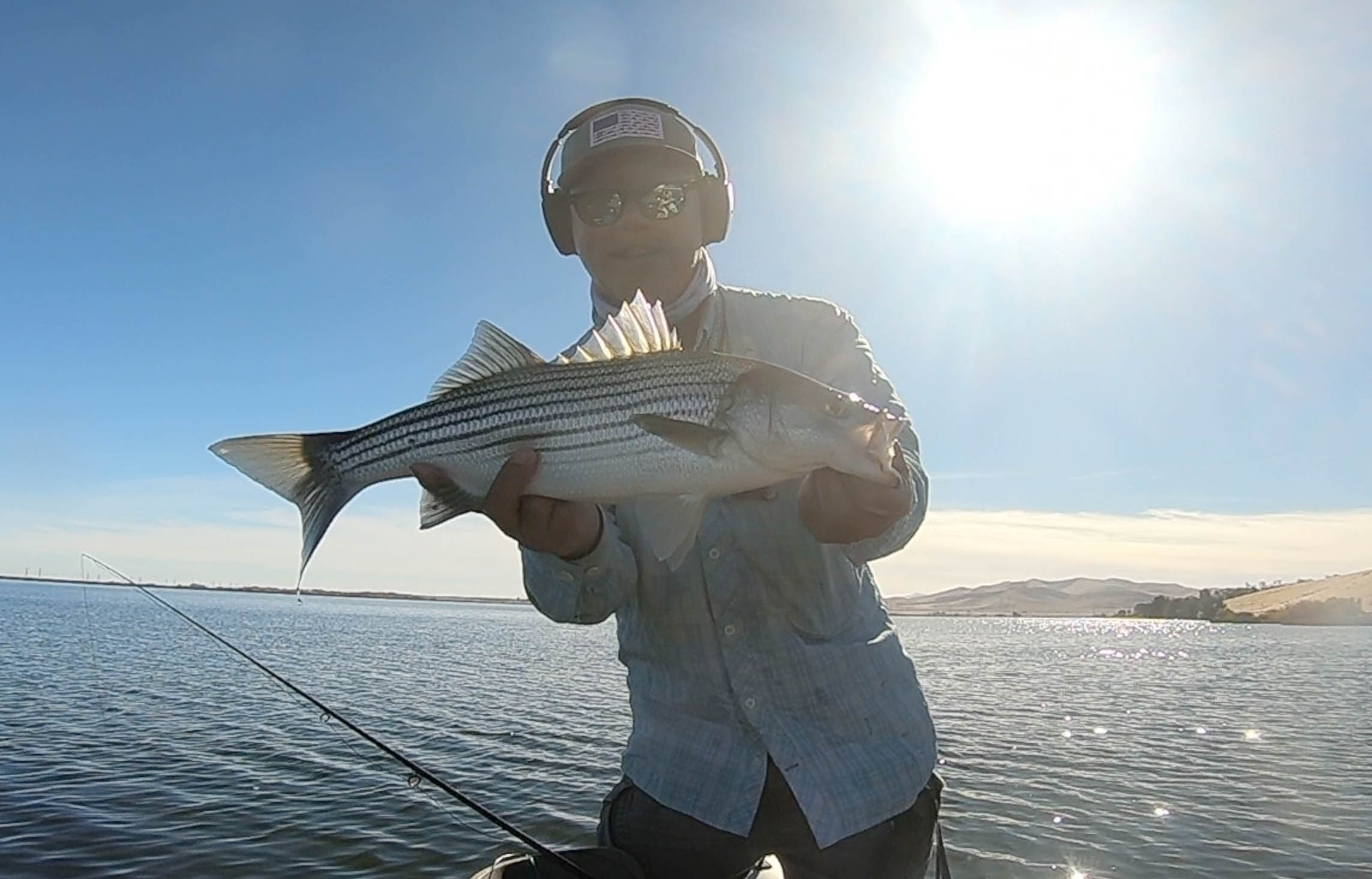 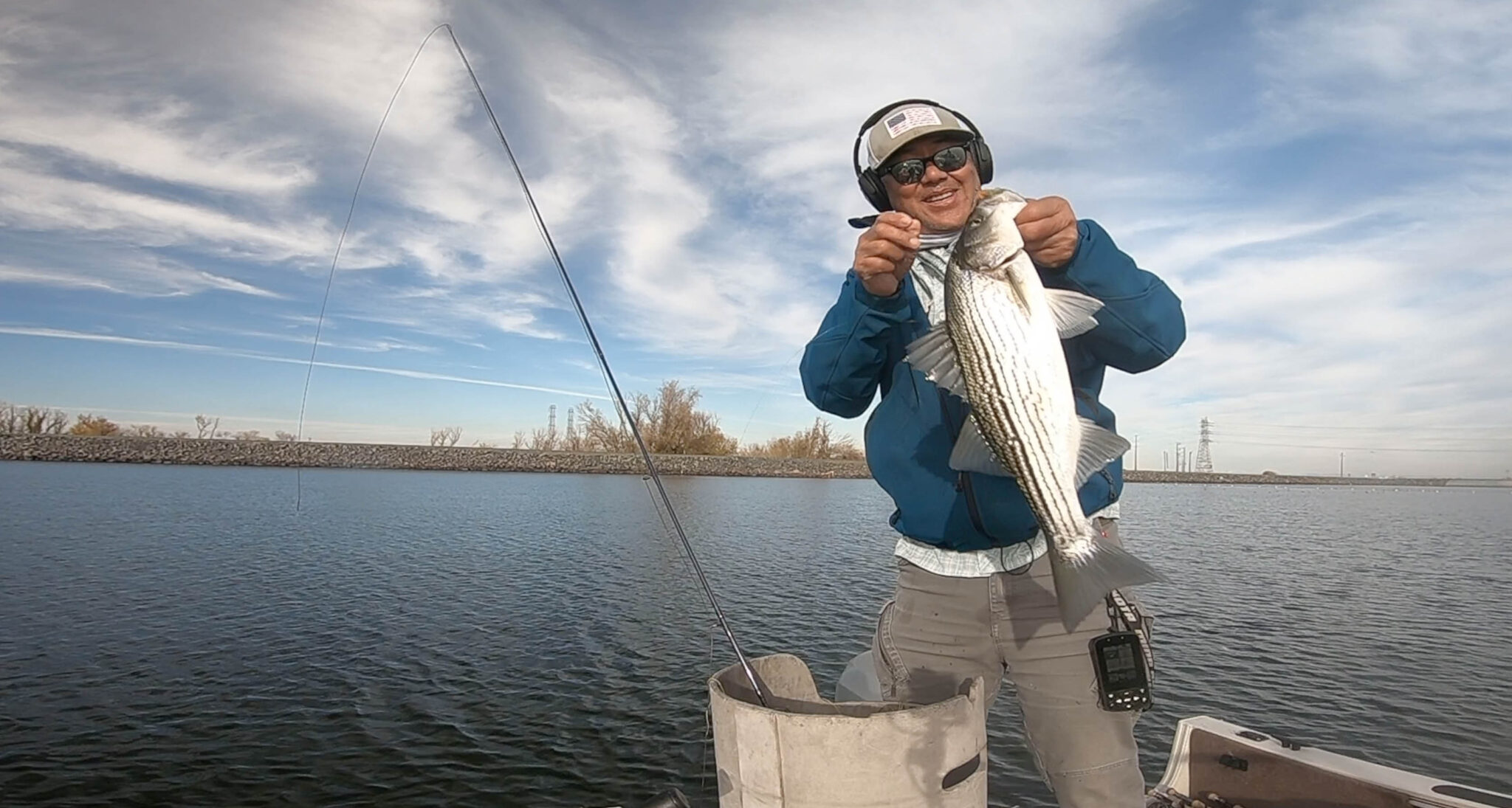 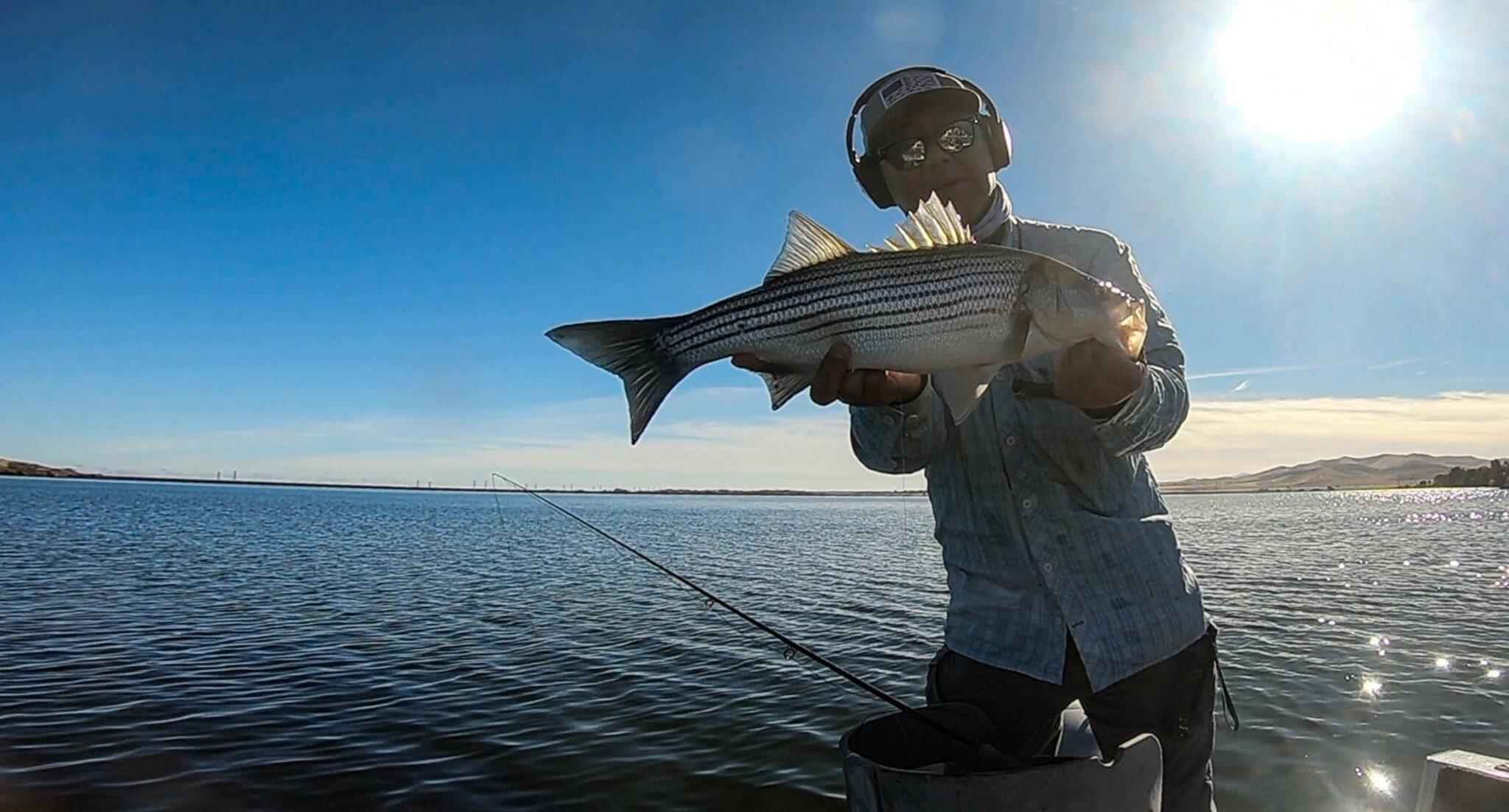