Disney Cruise lines sailed the Med for the very first time this summer and being that our family is addicted to Disney Cruises we had to see Europe for the first time on a Disney Yacht.  In what turned out to be one of our best vacations ever, we sailed for 14 days, and saw Barcelona, Florence, Marseilles, Palermo, Naples, Rome and the Vatican Museum, Capri, Sorrento, Villefranc, Olbia and Pisa. The Euro exchange was brutal though and it cost us more than I budgeted but it was well worth it in memories. The Disney Cruise lines are still, in my opinion, the best family vacation on earth based on its staff and itinerary and of course Palo’s Restaurant (the adults only restaurant onboard).   I took a Nikon D200 and a Canon Hv10 and had pretty good results with them in low light situations.  I also had a chance to test out a Gitzo Carbon Fiber Monopod  (gm2560t) which after research seems to be the strongest, lightest, smallest  pro monopod on the market.  I brought a Leveno laptop with Lightroom to pre-edit the over 5,000 pics we took on the trip but had little time on the cruise to work on it.  I don’t know how people do day by day blogs of vacations like these when there is so little time .  The best was definitely the ancient city ruins of Pompeii.  There is a really cool Pompeii website  online that Dr Michael Cole put together complete with a downloadable video tour that helped me prepare.  Apparently he used to live near Pompeii for awhile and made a detailed tour of it.  The other cool thing we saw was the Capuchin catacombs of Palermo. 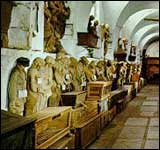 Looking like something out of Indiana Jones and the Lost Ark,  we entered the catacombs to discover rows and rows of  mummified Skeletons about two feet apart on either walls in small cubbys stretching for as far as you could see.   The catacombs date back to 1599 and some of the recent bodies seemed almost alive being so well preserved in the special  environment of the caves.  As a side note,  Gina and I noticed that in an informal survey of missing and decayed teeth in this population,  that there seemed to be incredibly good dental health in the mummy population which makes me wonder if such a study was ever done.  Must be the diet and lack of massive  sugar consumption in  ancient Naples that accounts for the lack of decay in the mummy population.  Could it  be that simple?  Food for thought.