Thanks to Frank’s suggestion I recently Hacked an Apple TV with XBMC and Boxee.   I must admit that its and eloquent solution to a higher resolution XBMC but I’m a bit disappointed with the 720 limitations of the Apple TV and no GIGABIT Ethernet.    Here is a machine that I purchased for a great price and modified with a Patirot SSD 32 gig hardrive.  I decided after a few experiments, not to load XBMC and UMBUTU on the machine,  but instead load XP and Media Portal.  I find myself really missing the networking utils, the ripping utils and other “windows’  compression tools so Ive decided to to back to the HTPC instead of the upscaled XBMC.

I love this new box for its built in HDMI out and Digital audio out on the motherboard..  The Wireless keyboard mouse, although kinda cheesy,  works reall great.  Cgheck out http://www.neurostechnology.com/ 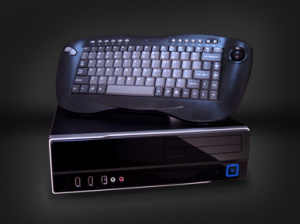