This will be the 4th year that Gina and I have judged speech and debate tournaments that Mia and Mark have entered.  And till now this is the first time I have  ever felt motivated to say something about the judging at these tournaments. As our fearless coach Gay Brasher told us long ago,”There are no professional Speech and Debate Judges….” Well I can now attest that there are asinine ones.

At last weeks Berkeley Speech and Debate Tournament–one of the most prestigious and difficult tournaments in the nation–Oomung and Mark, for the first time this year, did not make the final round. Normally, no big deal. The competition was tough and there were many nationally ranked teams represented. But when the ballots were returned and the results were reviewed, I can honestly conclude that their bad luck in round two was the result of sabotage by an inexperienced, racist, nincompoop of a judge who I would like to identify.   At this last tournament, My daughter Mia, a CAL freshman,  volunteered her experience and time to help judge at  the tournament .  She also  watched  her brother’s event Interpretive DUO.  It was immediately apparent to Mia  that Mark and  Oomung’s judge was a bit  unusual since he judged each round lying on his back in the center of the room on a cluster of tables. 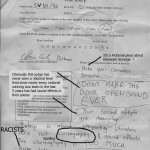 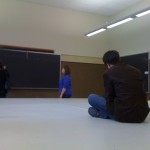 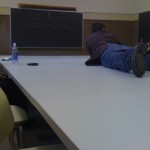 To make a sad story sadder, of the five teams in their round,  the bottom three teams all had finaled in previous tournaments this year and were given last place.  Of the judges top three picks,  none made it to finals and the second place team,  who by all appearances had never done a duo piece in competition,  although they were from Burbank  (where the judge was from ),  was ranked 2nd place.  If you are a judge from Burbank,  could you possibly NOT know the contestants from Burbank?

If you can read the judges signature on the ballot or recognize the reclining judge in the pictures,   please let me know by emailing me at msyn@carabelli.com.      Honestly, our kids and us parents prepare and sacrifice too much to get to these tournaments to end up with judges like this!  Its like  letting a blind man judge figure skating at the Olympics.