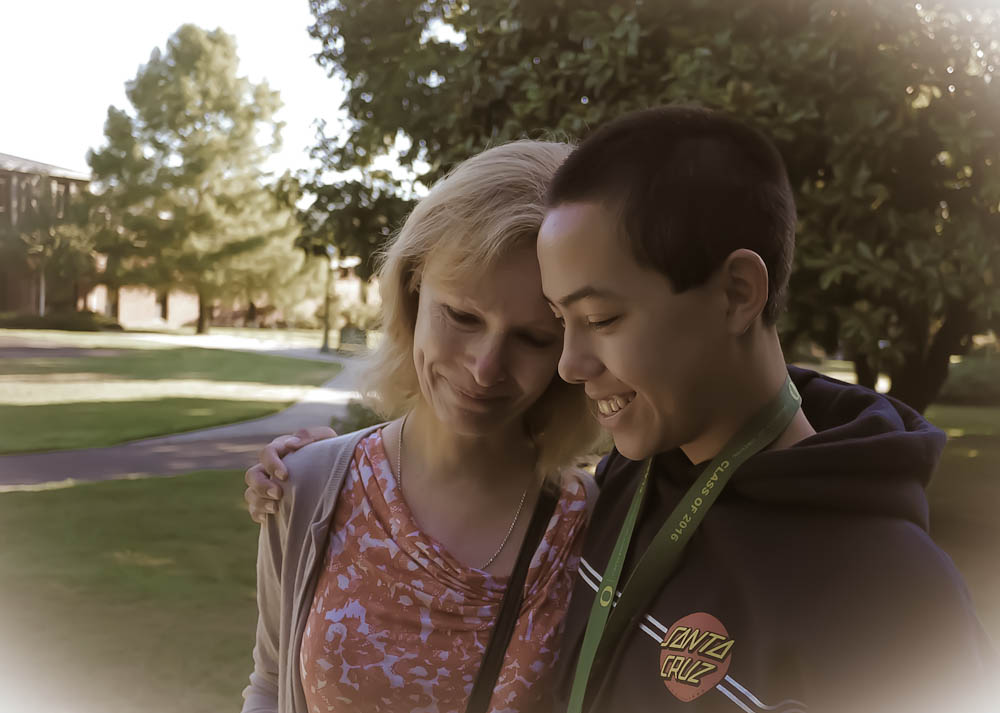 There comes moments in ones life when you feel like something epic has happened but you cant put your finger on exactly what it is.     I felt that way this weekend as we made the ten hour drive to Eugene Oregon to set up our son at the University of Oregon.   This picture sais it all–its hard to let go.     We left on Thursday and picked up my Mia at CAL  It was the longest car trip we have ever taken as a family and it was great!  We recently purchased an new Ford F-150 crew cab Truck that made the drive comfortable  and easy.   Mark was lucky enough to get a job with the school working for Residential Computing which required him to move in a week early for training.   We checked into our hotel on Thursday and the next morning we moved our son into his dorm room and shopped for things we forgot to bring.  The only people who moved in this weekend in the entire dorm was him and his roommate Henry–a nice kid from SF who also moved in early to train for  a school job.  We were extremely lucky to have avoided  the 4000 family’s that are moving in next week .  We set mark up and said our goodbyes.   It was emotional for Gina and I.  We didn’t really know how much we were going to miss our last kid at home, until we actually drove away and left him 700 miles away–we are now officially empty nesters and it is bitter sweet.

We went to a home football game in Autzen Stadium (the house that Nike built) on Saturday against Tennessee Tech.  What an amazing spectacle it is to see Eugene Oregon during a home game.  Autzen stadium has sold out 82 consecutive games-  we are talking 54000 seats!   What is truly amazing was selling out this game–a game against a non conference team that they have never played.  The ducks beat them 63 to 14 while testing their red shirt freshman quarterback beating them senseless Gundam Style.   Apparently its tough to get any quality non conference teams to play them preseason because no one wants to get owned that early in the season.   It wasn’t anything like watching CAL football–they play 100% all the time and the they play as a team and not a bunch of wanna be NFL draft picks.   There second and third string quarterbacks look better than any CAL QB after Erin Rogers.   And with USC loosing to Stanford in an amazing game,  the Ducks move up to #3 in the Nation behind LSU and  Alabama.  I can already smell the roses?   I pre bought tickets to the CAL|Oregon game at the new Memorial Stadium and it will mark the end of the Bear and the beginning of the the Duck.    Maybe I’m just bitter about CAL raising the shit out of tuition to pay for a new stadium and then losing their first game in it.  I enjoyed the game so much that I can see myself attending more Oregon home games in the future. This team is something special.

After we left Mark to his RESNet training,  we decided to break up the drive\crying home by spending a day and night in Ashland.   We saw  Romeo and Juliet at the theater Sunday afternoon and had an excellent time.   The restaurants in downtown Ashland are great and plentiful.   As I recall the last time Gina and I spent a weekend in Ashland was BEFORE kids or when they were really young.   This will probably end up being the routine since it was an easy drive from Ashland to home this afternoon.