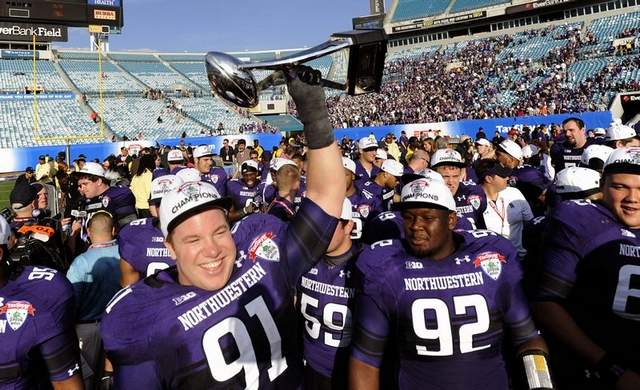 To understand why I follow Northwestern Wildcats Football,  you had to have been at that fateful game in 1979–my first Northwestern football game–a 61-14 loss to Michigan State and the  29th loss in a row, breaking the record for consecutive losses by any college football team in the nation.  I remember sitting with a bunch of first year dental students in the student section.  One classmate- Richard Prouse from USC–started chanting “Rose Bowl” mockingly. I looked backed and laughed, but as I turned around, a sea of Northwestern Fraternity Brothers were about to grab him and throw him off the bleachers.    At the close of the game, Northwestern students rushed the field to “celebrate,” and chanted “we’re the worst!”  The students rushed the field, tore the goalpost down and marched it 5 blocks and deposited in lake Michigan and partied till dawn. Northwestern continued to loose in  dramatic fashion  for the next two years and extended the streak to 34 consecutive games.

In 1995 Northwestern made the most dramatic turnaround in college history as it started its season beating Notre Dame. Northwestern achieved a ranking of #3 in the nation and their first Big Ten title since 1936.  In 1936 Northwestern Beat CAL (yeh!  Mia’s School!) in the Rose bowl.  The span of 59 years between titles is the longest in the history of the Big Ten Conference. They faced off against USC in the Rose Bowl–only the second bowl appearance in school history. The Cinderella season ended with the Wildcats losing 41-32.   We had a Rose Bowl Party that year an fans gathered at our house BBQ and weeped as USC killed us. But that would be just the beginning of another loosing streak.

Northwestern built it’s program up with alumni donations and became a contender making it to 5 bowl games since and not winning a single one until today.  The 1949 Rose Bowl finally can fade into Northwestern history after the Wildcats snapped a 64-year postseason bowl drought with a win over Mississippi State in the Gator Bowl.  The dynasty begins .