With a blowout win over Kansas State in the Fiesta Bowl, it’s clear to most that they are at least in the top two teams in the BCS.  With K-State no match for Oregon at all and #3 Florida getting pounded by #22  Louiville in the Sugar Bowl.   That leaves only three teams –Notre Dame, Alabama and Oregon with 12 wins or more.  All the stood in the way was an overtime field goal against Stanford. I’m still bummed out about that one. 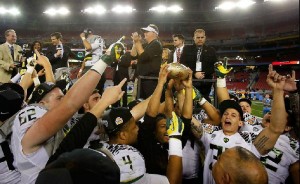 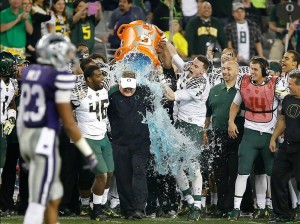 Will Chip Kelly stay in Oregon or take the NFL.   The word around school according to Mark is that the Coach wants that BCS National Title bad.  Four years of getting closer and closer.  I think he knows that.    There is no better chance for that than to come back next year.  It seemed that he was hinting that he was loyal to his student players and I don’t think its about the money.    Wouldn’t it be irony if Jeff Tedford ended up at Oregon!  Hope Chip stays.  He will stay,  I would bet on it.