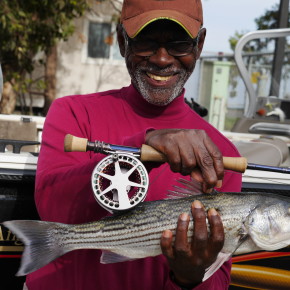 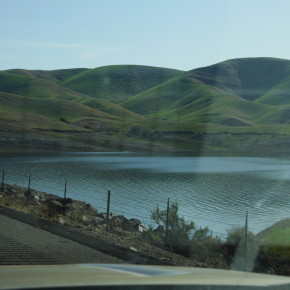 After being defeated by baitfishermen on Saturday,  I though maybe I would take a friend out fishing today and try some baitfishing.   We stopped by Coyote Bait and Tackle, picked up some anchovies, sardines, bloodworms, and a dozen medium size minnows.  They were out of jumbos.  We launched at the Forebay around 9:00.  It was cloudy and still.  We headed north from the boat ramp and proceeded to the 5th bouy north.  Saturday,  an old geezer told me there was a 25 foot hole off the buoys and they caught 20 fish there.   I anchored the boat off the spot after metering it with the sonar.  Within 20 minutes Rick hooked two large stripers.  Like an idiot,  I didnt bring a net .  The second fish was about 10 lbs and I lost it at the boat trying to Boga it.  The bait hook was barely on and I just plained farmed.it.     I thought the day was going to be crazy and I had visions of putting four fish in the boat and then flyfisihing the rest of the day but it didnt materialize..   After those two early fish,  nothing .  We used all the minows from 9am to 4pm and nothing.  Water temps are up to 64 degrees now   The water is still low in the main lake and forebay.  I fly fished the Wall and the Trench and managed to jump one decent sized LMB  but the afternoon flyfishing was painfull.    I hope the lake starts getting better soon.  Im still hooked on fishing the lake though and dont really care.  Ill be back next week.  Its interesting to note that there is no sure thing even with bait.

2 thoughts on “Not much better today….”