Last week, a friend of mine called me from NAB to ask me if I would like him to pick up a Rotor Concepts quadcopter, that I was curious about.  Ive been looking at Quadcopter RC Gopro  rigs for some time now but the technology is a bit lacking when it comes to isolating the camera to elimintate the “jello” effect caused by vibration. Things are changing fast on both these fronts! 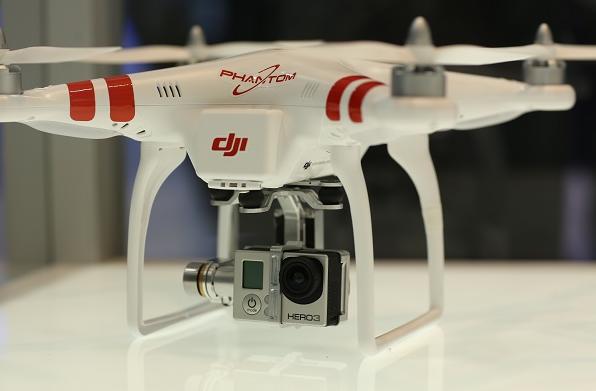 I passed on the Rotor Concept HPQ-1 because there was an abundance of negative reviews pertaining to support from the company.  I am leaning towards the DLI Phantom  which has GPS positioning and Fly Back safety protocols.  Recently,  there has been rumor that a waterproof one is coming out  called the Liquapell Phantom.  This water proof drone is designed to land on water and survive temporary submersion.  The unit is put into a vacuum chamber and treated with a highly hydrophobic material  (like this maybe) nanometers thick that coats all electronics etc…    It hasn’t been released yet but I am on the list for the first units.   For fishing and surfing videos,  this is it!.   Also introduced at NAB this year is a new product and game changer–the Zenmuse Hero GoPro gimbal  which is  stabilized with electronic brush-less motors.

The phantom is the most supported quad for prosumer video junkies on the market with lots or support and great BLOGS .

Also released at NAB was the new generation of Electronic Stabilized Steady Cams.  In particularly the  MōVI M10 (From Freefly Systems).  It is a 3-axis, gyro-stabilized camera gimbal that costs around $15,000.  Before you gasp,  look what this thing does.  This unit will turn amateur videographers into seasoned cinematographers with very little practice.  The beauty of this thing is that you can hand it off without interrupting the “steadiness”.  In essence,  with a little imagination, practice and  and one of these,  instant career on a inde budget.  Like the pros do,  you can have a second operator can be in charge of aiming the camera with a second remote unit.

Here is a great film made with the MoVi on a quadcopter.  I can already see the shots I want for my epic fly fishing video.    The impossible shot is now possible.