With 66-3 victory over Nicholls State (Louisiana) setting a school record for total yards in a game at 772 yards, there is little doubt in my mind that the Duck System is still intact post Chip Kelly. Originally scheduled to play Kansas State , Nicholls State was a last minute fill in and rumor has it that they got paid nicely for the pounding. It was a cool game to watch because the second and third string showed how deep the Oregon Talent really is. If I were the SEC teams, I would watch this tape and be scared. Again, its not about Oregon not wanting to play a “real” team, its just that other teams are afraid to play the Ducks outside of there “superior” conferences no matter how much money is involved.  Best looking football team College football-thank you Nike. 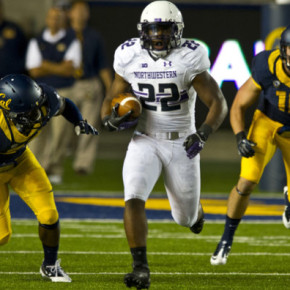 Cal on the other hand had what I would say was a pretty respectable loss to No. 22 Northwestern who won 10 games last year and is basically intact with 15 returning starters. Northwestern is ranked one position above UCLA at 22. Up to the third quarter, it was a tie game and I was wishing I was there. Gina and I would probably have worn purple though. This being the first year that my daughter has graduated from CAL, Ive lost my prize parking space right down the block from Memorial Stadium. If the Bears don’t start winning soon, I don’t think Ill be buying tickets soon. Sonny Dykes did a great job with the freshman quarterback and they had moments of genius with the first drive and touchdown on a fake field goal play.  Northwestern looked like they were faking injuries in order to slow the game down towards the end of the game.   I doubt Northwestern  is that sophisticated, but it did look weird with three players going down in three consecutive plays.