To the bump up the quality of my video camera work for my fishing videos,  Ive been looking at steadycams for a long time.  Most of the gravity rigs were expensive and heavy.  They were not really practical to carry when traveling.  But since HQ video cameras are now the size of a GoPro or a small DSLR,  its now possible to dream of a steady-cam that’s easily pack-able , small and light.  There are a gaggle of new products on the market that aid a steady shot, and the ones most interesting to me are the ones with brushless motors and gyroscopes.

For a year now, I have been playing around with building a DIY digital 3-axis gyro-stabilized handheld camera gimbal –an electronic steady-cam for a DSLR sized video camera or a GoPro. The availability and affordable cost of fast brushless motors, open source software and cheap control boards and gyro chips made the idea of building a steady-cam that I could run down a trout stream , fly in a helicopter or mount on my head while landing a fish was getting closer to reality with sites like Fasttech. 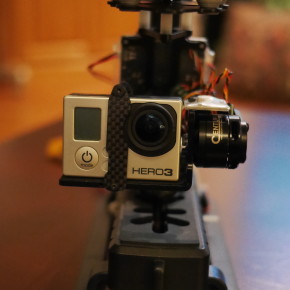 I started out building my project after finding a website that builds and sells hobby control boards through RC Helicopter Stores –BaseCam Electronics.  From this site I was able to buy a 2 axis controller board and download firmware to support it. There are many sources for such control boards in China and you can buy them on ebay for cheap,  but this site is the original and the firmware is the most mature.   The firmware can be downloaded here.   The main board controls the voltage to the brushless motors and the smaller board determines the plane to keep the camera in.   As long as your mount is light and the axis of the motors passes through the center of gravity of the camera,  your good to go.  The holly grail of all gimbled steadycams is the MoVi which I drooled over on a previous post.  Its a 3 axis stabilizer which I hope to build eventually using the plans from here.

I built the gimble on a XGrip camera mount so I could hang it from the upper arm and also be able to put it on a tripod mount.