The weekend started out blowing hard at San Luis Reservoir.  Saturday morning and afternoon gusts were 20mph  but Sunday turned out to be stellar.   No wind and 85 degree temps in mid march.   The Solonar tables showed a good day but it always does after a full moon.  San Luis on the other had doesn’t seem to fish well after a full moon.   The Delta continues to get good reports even with the lake and forebay being slow.     I think the fish in the delta this time of year are fresh from the ocean and therefore the dynamics of that fishery don’t always mirror San Luis.

I started out Saturday fishing a pole dancer hoping for some surface action.  The lake has risen substantially and is around 50 feet from the top.   I didn’t see any fly fishermen but there were about 15 boats trolling and bait fishing. congregated around the trash racks.  You can see the current rippling  on the surface from the pumps which are 100 feet under.  It’s possible that most the fish in the lake are hanging out at the pumps with all the current coming from there.

I managed one dink in the coves west of basalt.  I fished the Bay of Pigs and the rock wall to the trash racks in 40 feet of water with no luck.  I did meter fish but I am suspecting that many were American Shad.  I spent a couple hours chasing surface activity in the green muck that is starting to grow in the surface layer.   I saw surface activity even in the deep water as well as in the current in front of the trash racks.  I managed to put a fly in front of a few fish but had no grabs.      On the way out,  I checked the fish cleaning station at around 1:00.  There were 4 large  fishheads in the trash.  All were fish from 10-15 lbs.  The park lady told me on the way out that the fishing had been slow and blamed the moon.  Now that water is rising rapidly and the shoreline is changing,  its a new ballgame. 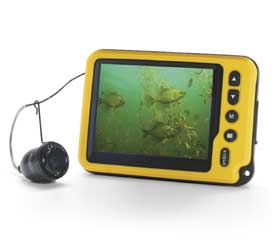 A friend of mine recently chatted me about this portable underwater camera.  His thoughts were that it would certainly be useful abalone diving or walleye fishing in the midwest. (his passion).  I checked it out and it looks very interesting.   The unit is the Aqua-Vu Av Micro 5 Camera with DVR.  It has a DVR to 8 gigs of internal memory built in,  a 5 inch LCD,  100 feet of cable, an IR lighting system with a 3x zoom and its rechargeable.  It comes with a FIN for trolling and records in color .AVI at 650×490 resolution down to .01 lux.  Its a pretty small thing to have in the boat for kicks,  Any smaller and I think you could use it medically if you know what I mean.  Im almost afraid to use it in San Luis.  There be monsters.