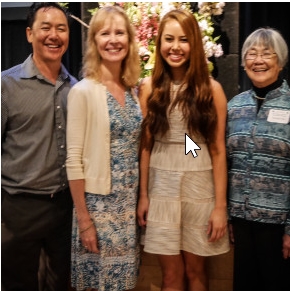 This last week we celebrated Mia graduating with a Masters Degree from Columbia University in New York.  She is now the first of the Syn’s to graduate from an Ivy League college and although her career path is uncertain,  she has successfully mastered and overcome the academic, personal, and financial rigors of Columbia University graduate school while living in New York City this last year. Only a year ago, we were at CAL listening to the university mis pronounce her name as she received her Bachelor of Science degree.  I must admit that the Columbia Graduation was more polished and traditional than  Berkeley’s.    I often wondered if the graduation ceremonies at the Ivy League Schools were secretly different some how.   They took place behind closed doors and you had to have a golden ticket to sit in the audience to witness the traditions and historical pomp and circumstance.  It was all that.  Columbia only invites speakers from within the university and there was plenty of name dropping throughout the course of the ceremony.  Of course Obama was mentioned having graduated from Columbia with a BS in political science.  I also learned from the commencement that the Pulitzer Prizes were established and endowed by Columbia University Graduate School of Journalism and that they are regarded as the highest national honor in print journalism, literary achievements and musical composition encompassing 21 categories.   Columbia University is the third hardest admissions  of all the Ivy Colleges.  It was founded in 1745 and has a medical school, a dental school and includes five of the the Founding Fathers of the United States as alumni.  It has 43 Nobel Laureates, nine Justices of the Supreme Court,  28 Academy Award winners, 29 heads of state including three presidents. From a computer science perspective,  the MPEG-2 algorithm was developed at Columbia University by a professor of electrical engineering and is the ONLY university to hold a patent in MPEG-2 technology which is the foundation almost all  digital media today-generating about 100 million in revenues for Columbia University.  Lets hope Columbia’s network can help Mia with her goals.

Another Fatty- the more weight I lose, the fatter

Forebay Fatty- something is in the water. Never