The idea of catching a 30 inch plus has always been slightly beyond my expectations .  I have a hard enough time catching  25-28 inch fish.  The prospect of catching a “yard long”  trout is reserved for my first trip to Kamchatka, Jurassic Lake or Alaska.  I knew that there were fish that size in the Palmer Ranch Ponds in Alberta, because I lost one three years ago when I first fished them but I never thought that 7 fish that size would be hooked and several landed in the three days we fished the ponds.  The Palmer Ponds is an oasis for these mighty fish.  The ponds don’t freeze during the cold winters and are isolated from Pike and other predators in a nutrient utopian environment for trout.  You can see these giant fish constantly eating midge puppa all day long.   The Palmer Ranch Ponds in themselves is a reason to go to Alberta.  You might not catch many fish but you can site fish all day to yard long fish and eventually,  if you are patient enough, and have a little luck on your side,  the fish of a lifetime awaits.

The fish on the ponds hit a half dozen different flies and I ended up rotating between a missing link, water boatman, cowboy leech, midge puppa, and a black fat albert.   Once in awhile they hit a small streamer as well, but nothing beats fishing  dry fly and watching a submarine sized fish, suck it in.

One of the back ponds is filled with PIKE up to 45 inches long.   The SynTwins had there way with them one afternoon catching over a dozen large pike on flies.  Many personal best records were broken at the ponds this week and a few near heart attacks with some large fish lost. 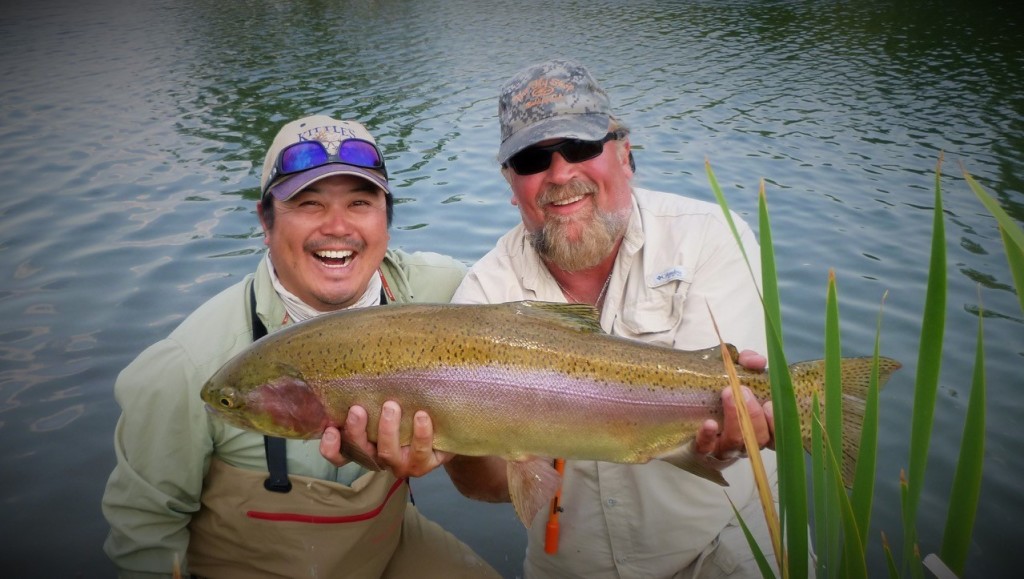 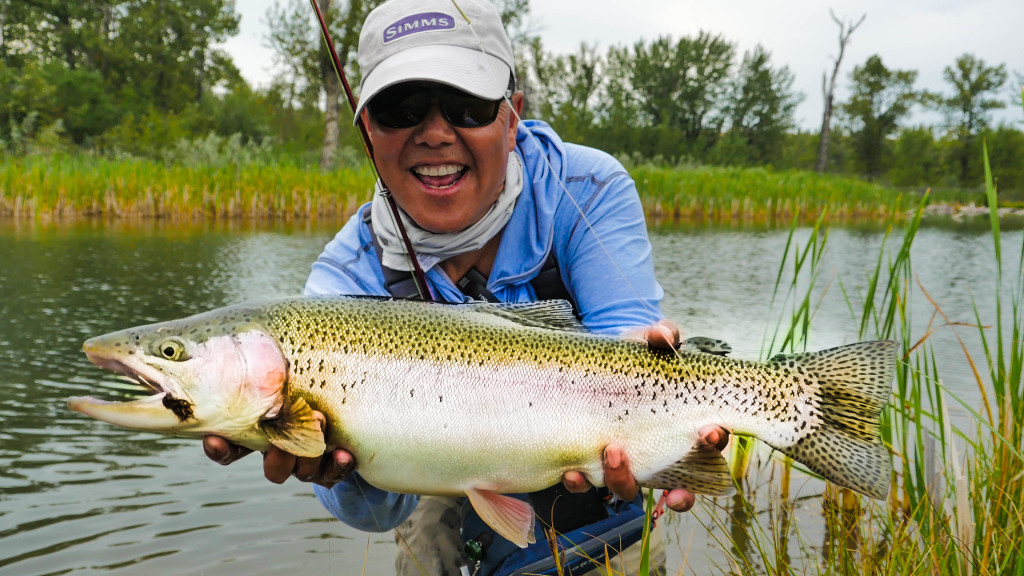 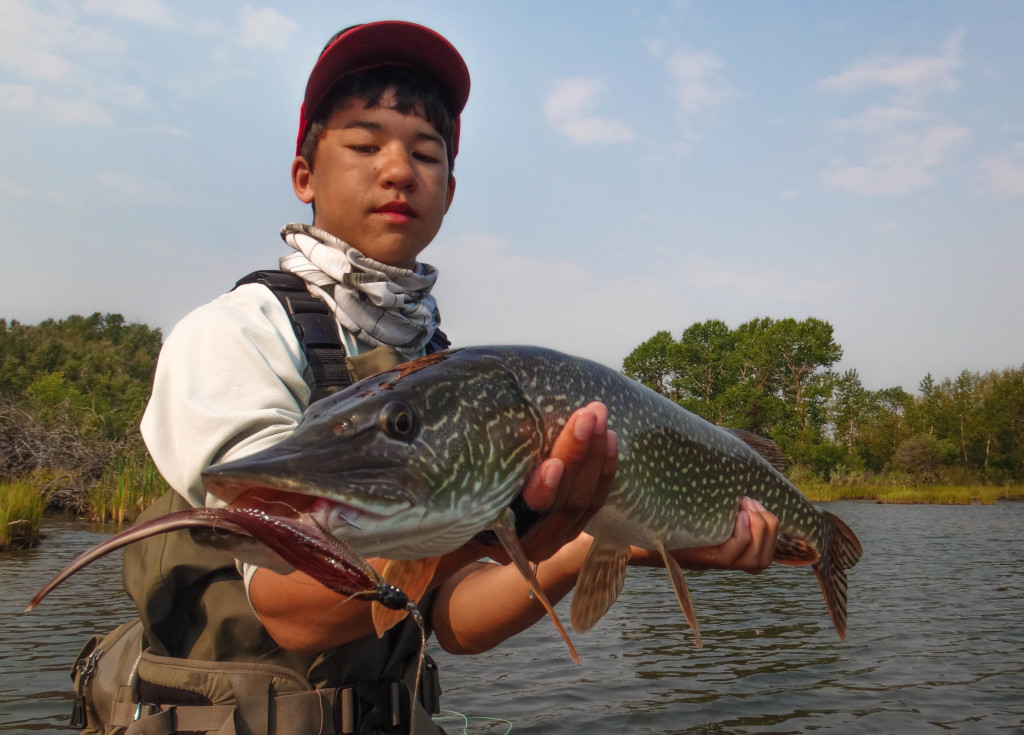 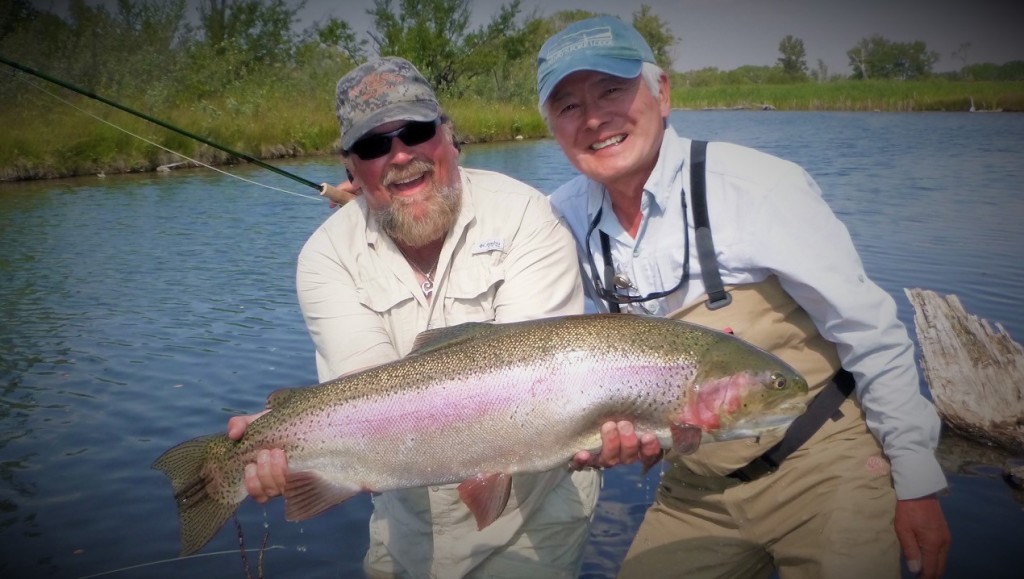 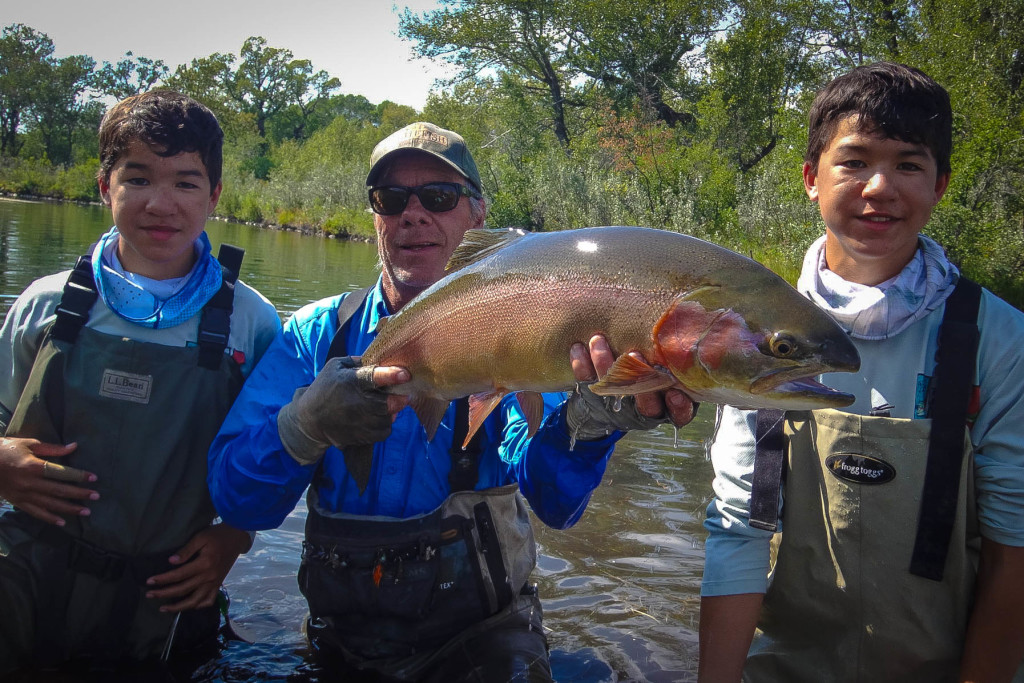 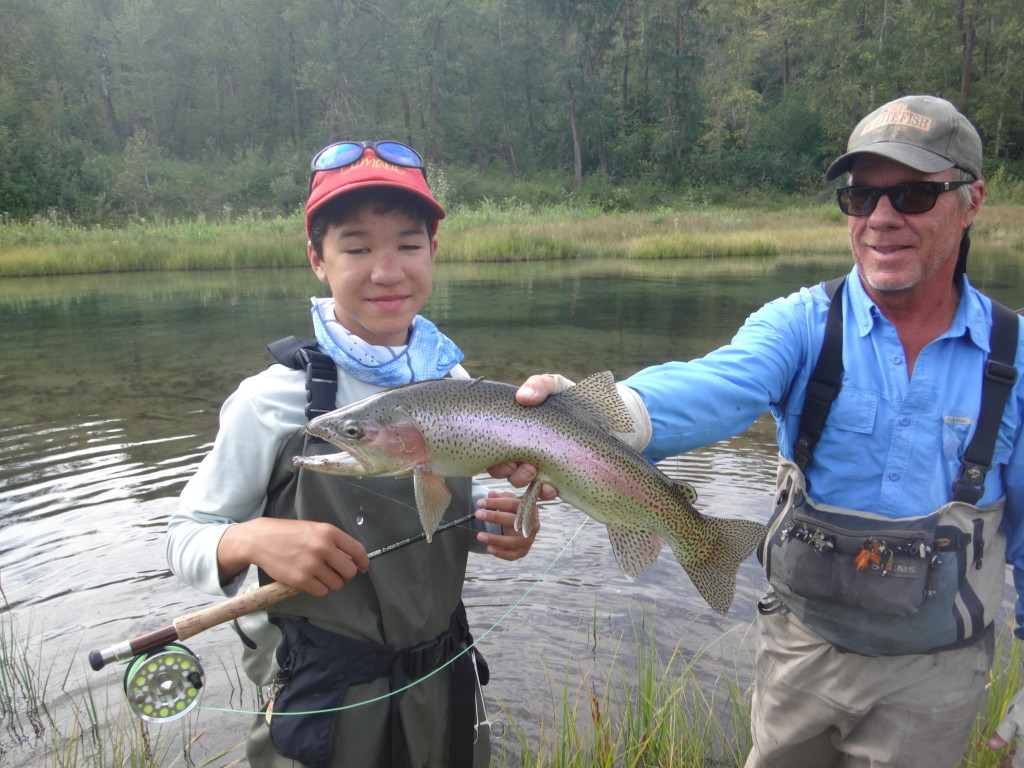 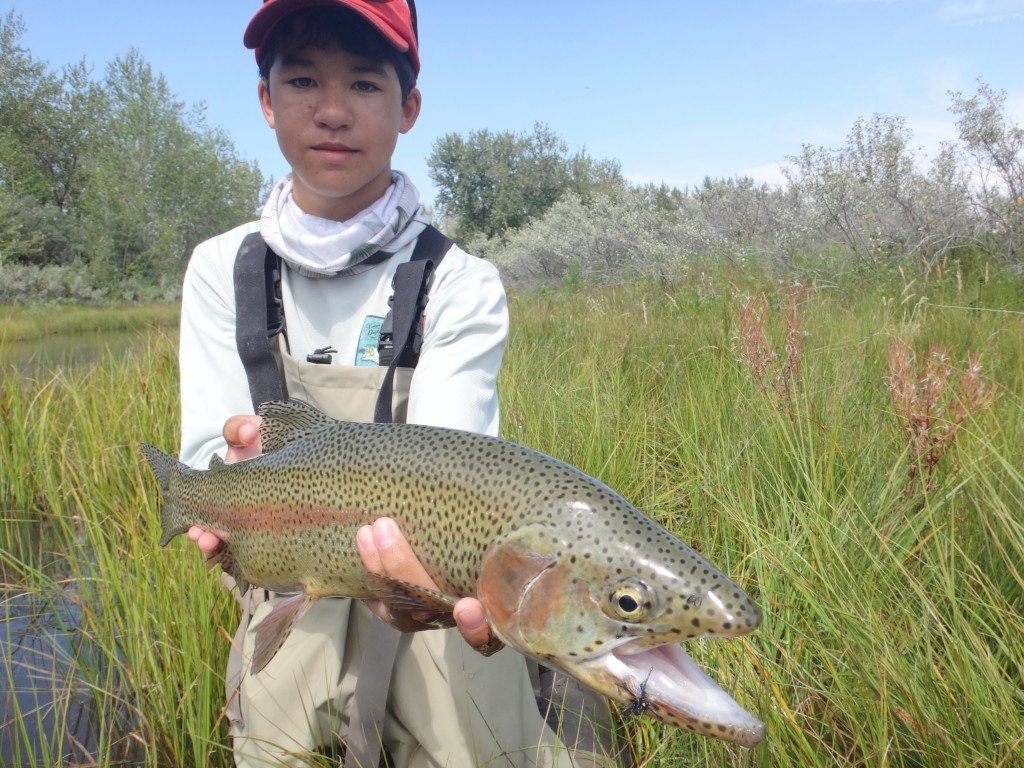 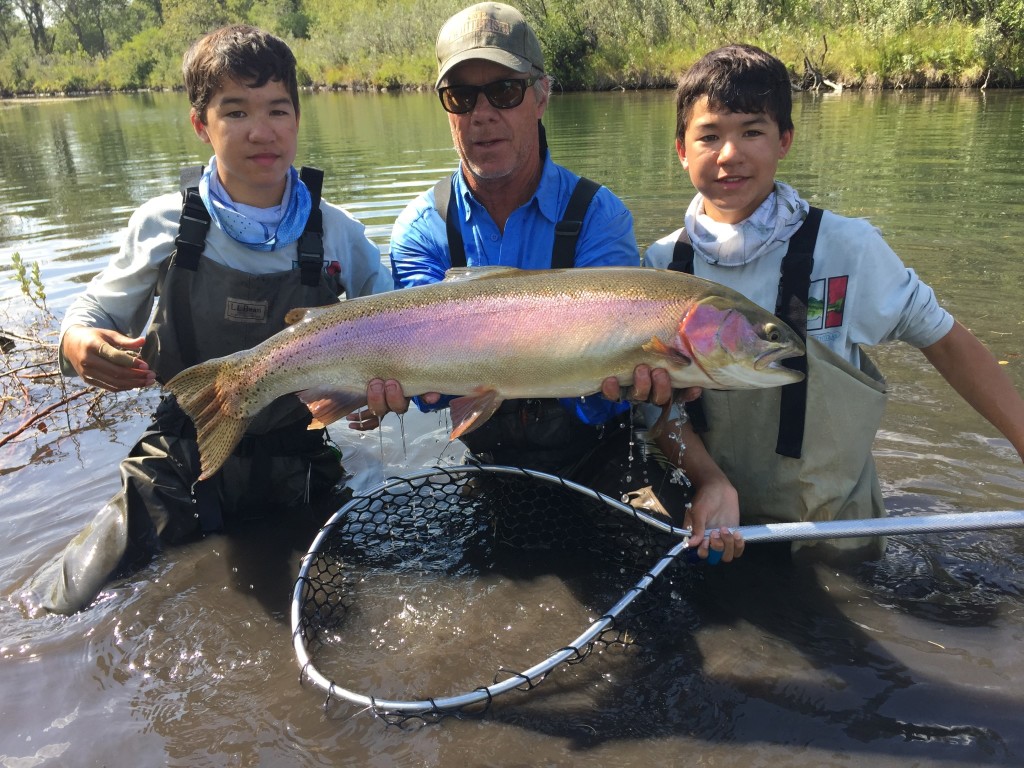 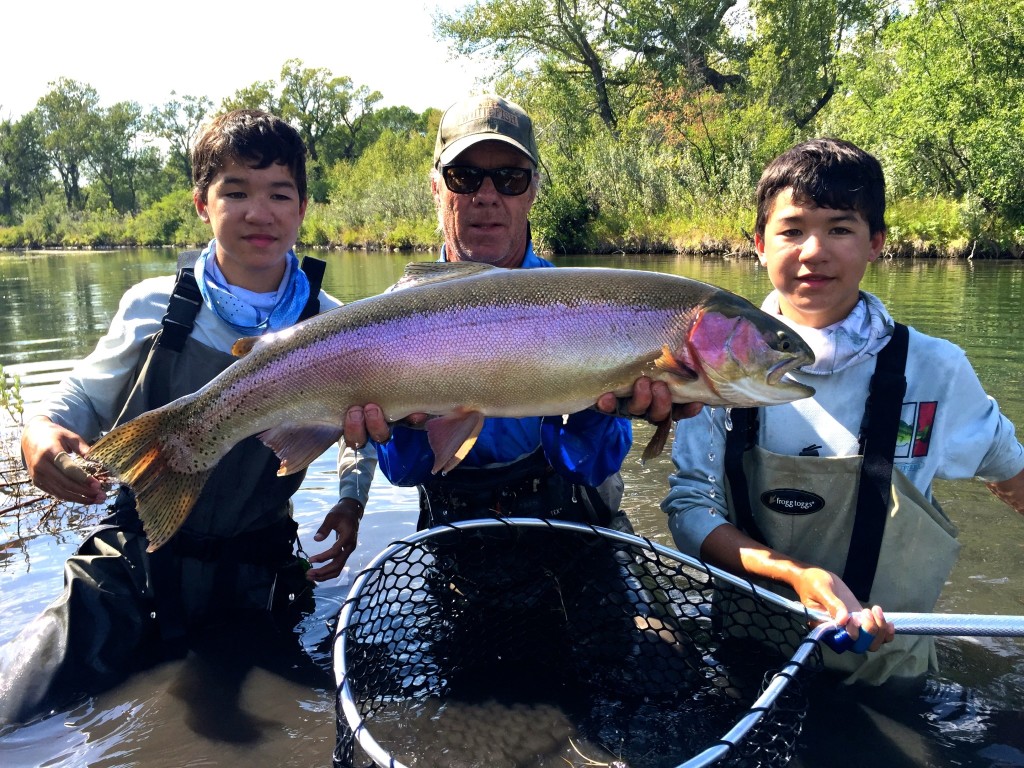 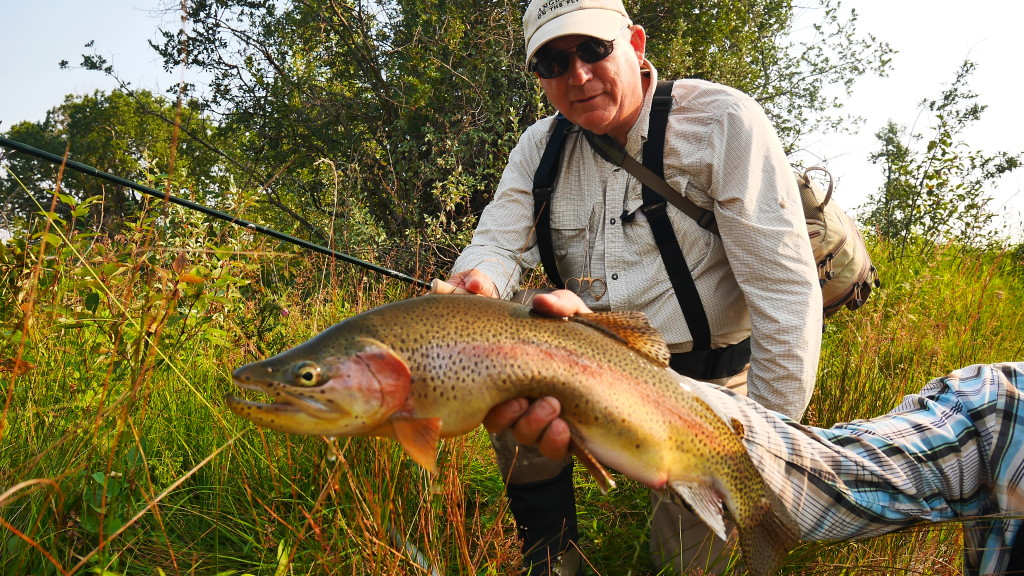 On the last day at the ponds,  Wayne hooked and lost one of those yard long trout in an epic battle.  Here is how it went down.

At the end of the day we were all walking out and the guide (Mitch) saw a big fish at the end of the pond. Papa John was right next to him so Mitch asked him to make a cast. Papa John handed the rod to me. I said no because I wanted him to get the fish. He said he could not make the cast with all the brush around. I said he COULD. He insisted that I take his rod. So I did and I waded out to get in better position. I made a few casts with the cowboy leech that was already on the rod and got no grabs. Since everyone was leaving I made one more cast so I can reel in. I somehow stopped mid way because I saw a fish. I looked away to the guys on the bank for second and then Matthew said “hey dad I think the fish went down for your fly”. I took one strip and it was fish on!