It is human nature always to find fresh cause for optimism.

Henderson Springs came out of Covid in a big way.   The quality of fish that Mark Henderson has put in the 5 lakes that make up this amazing compound obviously gained weight over the last couple covid years as did I with nothing to do but eat and binge watch Tiger King like it was my job.  With some of the regulars unable to attend,  I found myself in a position to ask a couple friends that have been anxious to try the lakes.   I finally had the opportunity to take my cousin who, for some reason, has fished nearly every body of water around Henderson Springs but never Henderson Springs.    Wayne only lives a couple hours away too and we have been fly fishing Northern California trout ponds hard for over 50 years.    I think he came away as amazed as I was this trip with how big  and healthy  the fish were.  Also impressed with how well the 5 lakes are maintained.  Having only two days to fish the compound,  I still couldn’t show him every great spot in every lake  I’ve fished over the years. 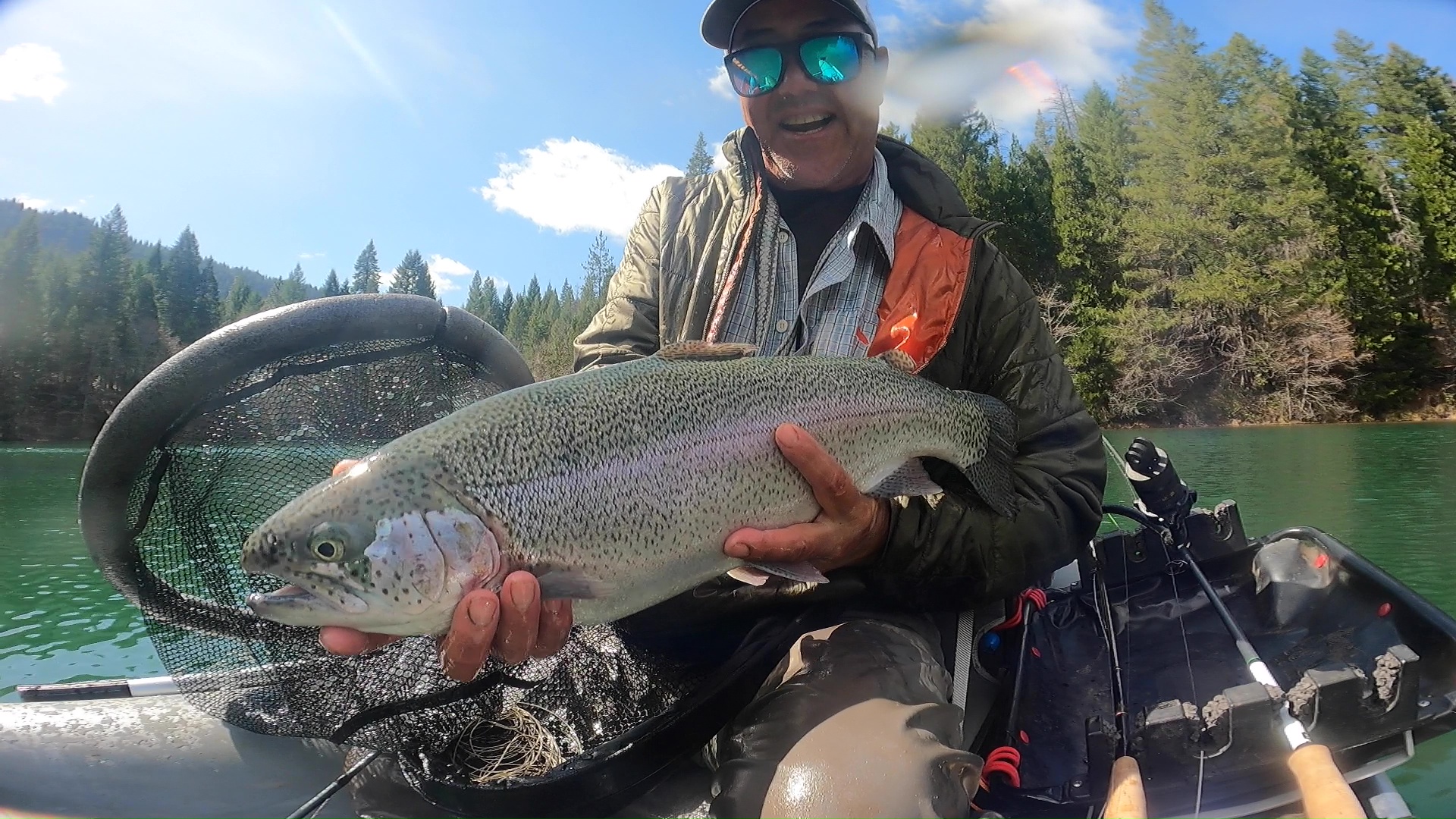 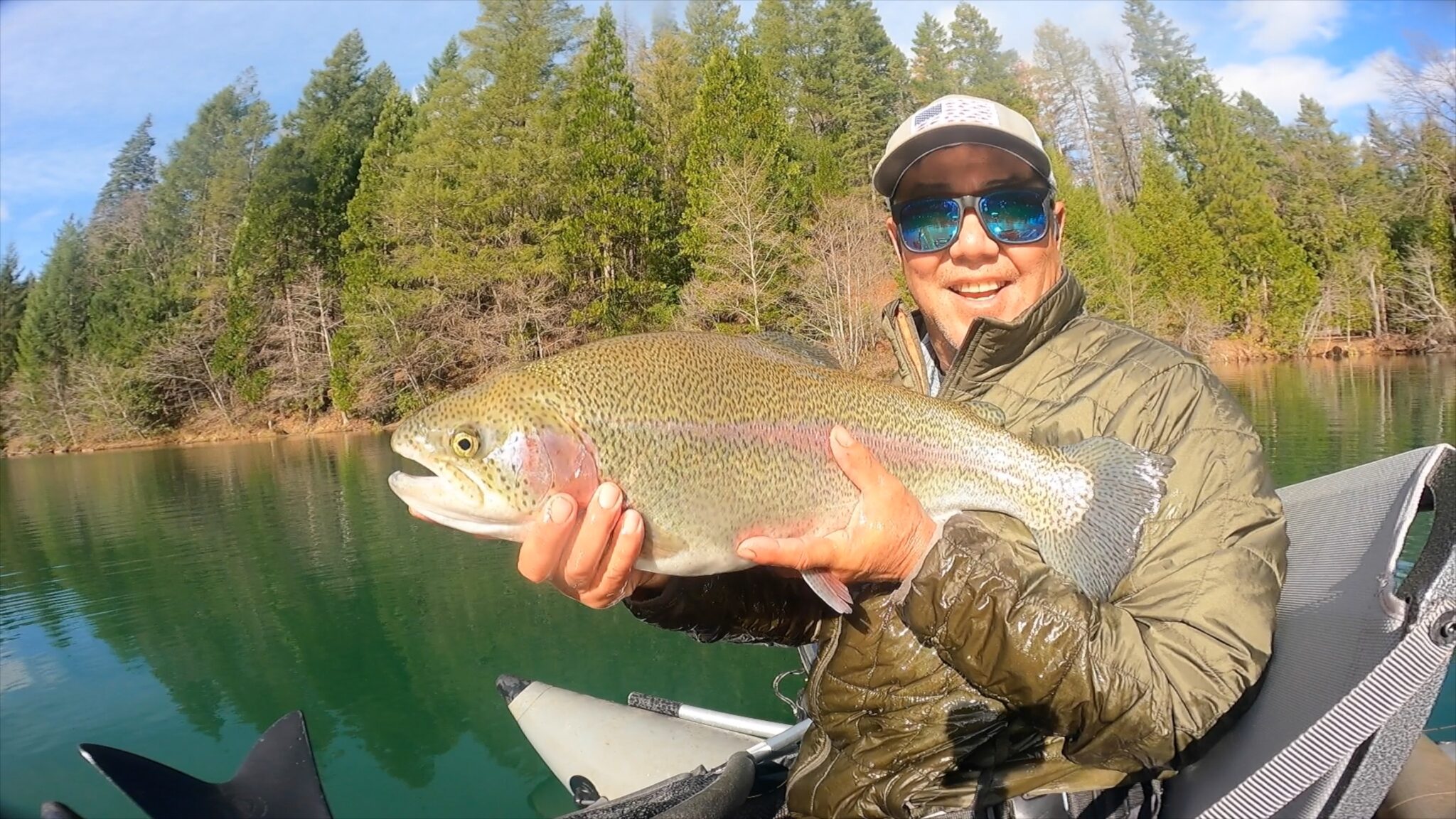 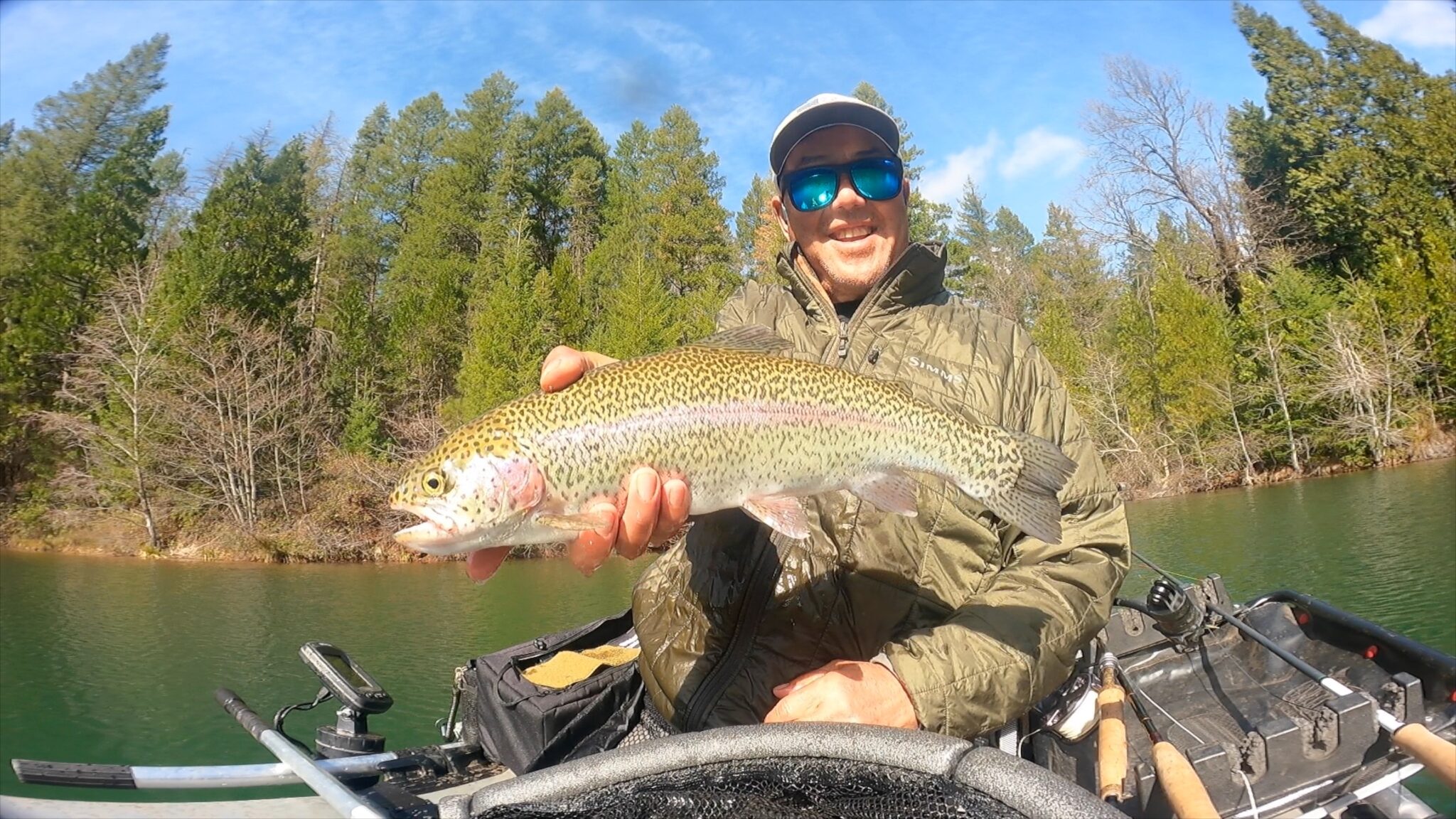 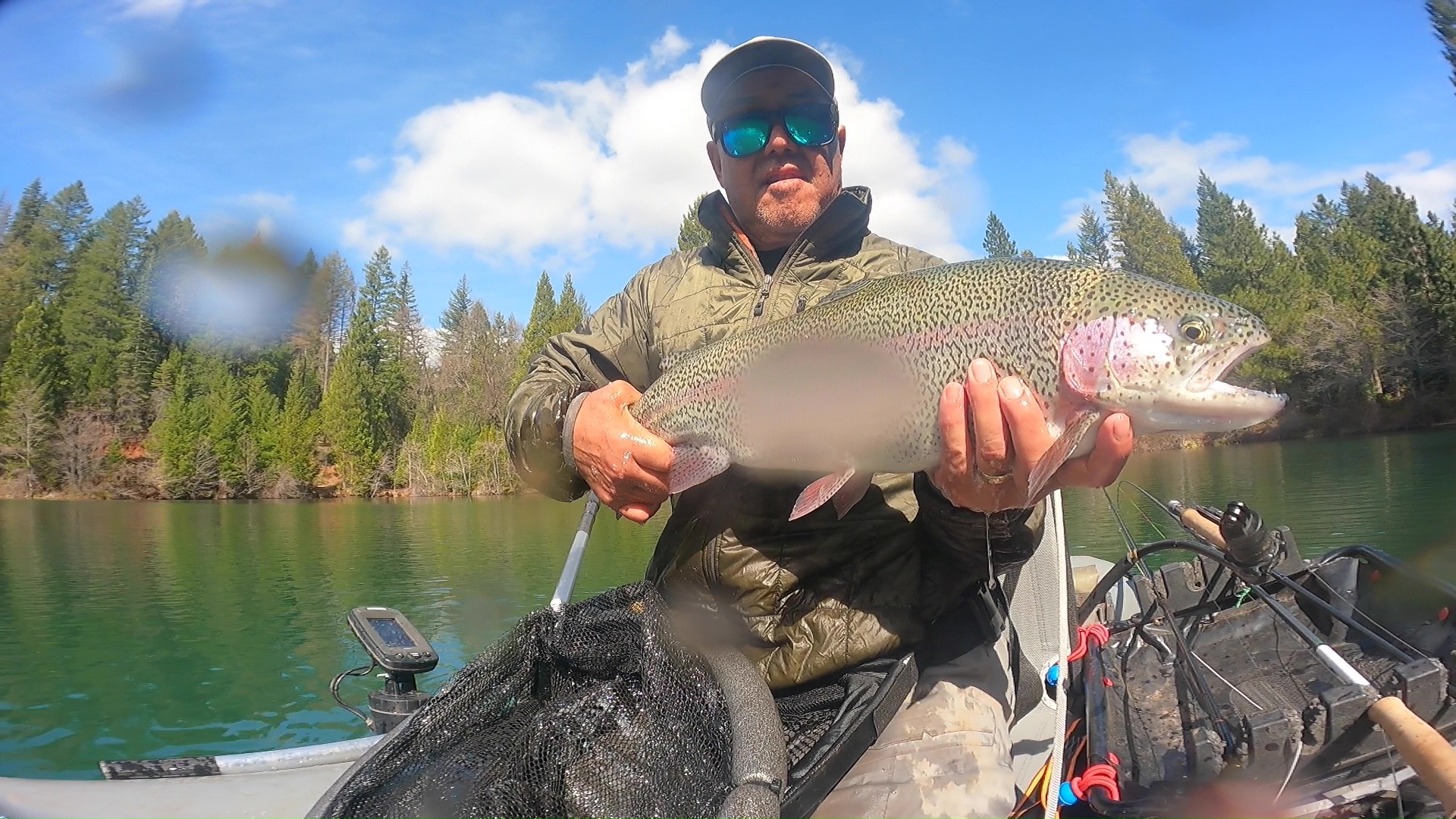 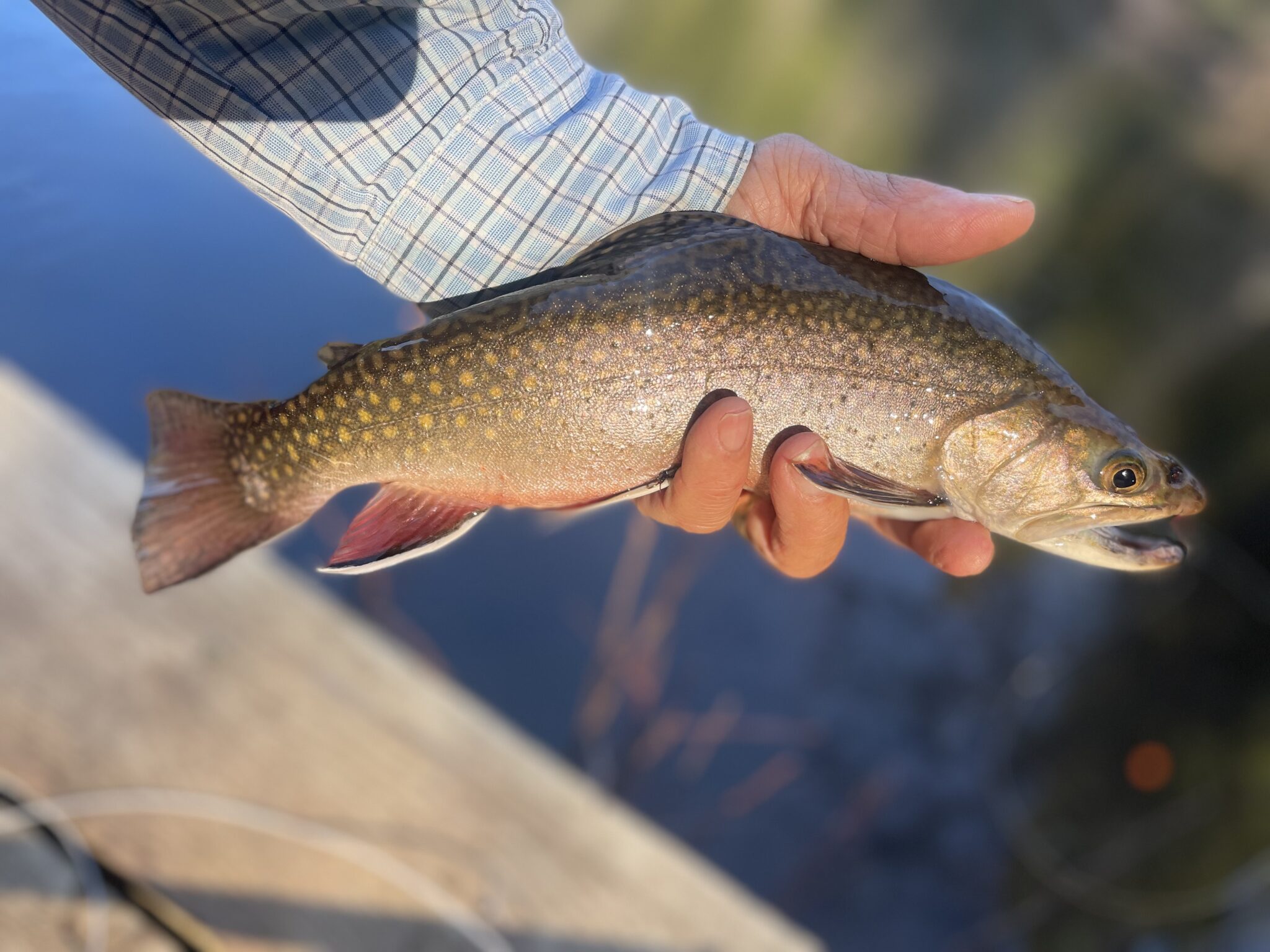 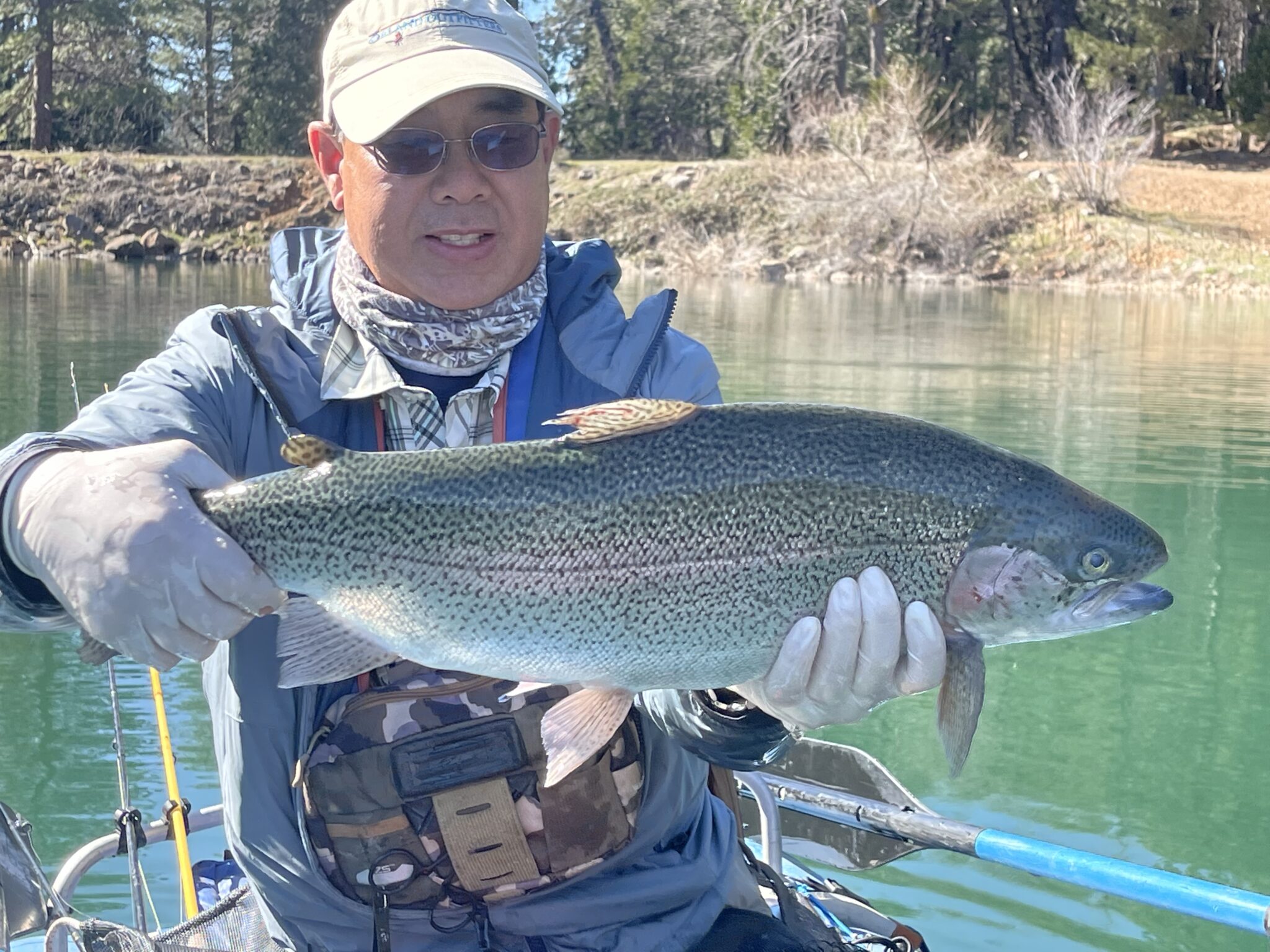 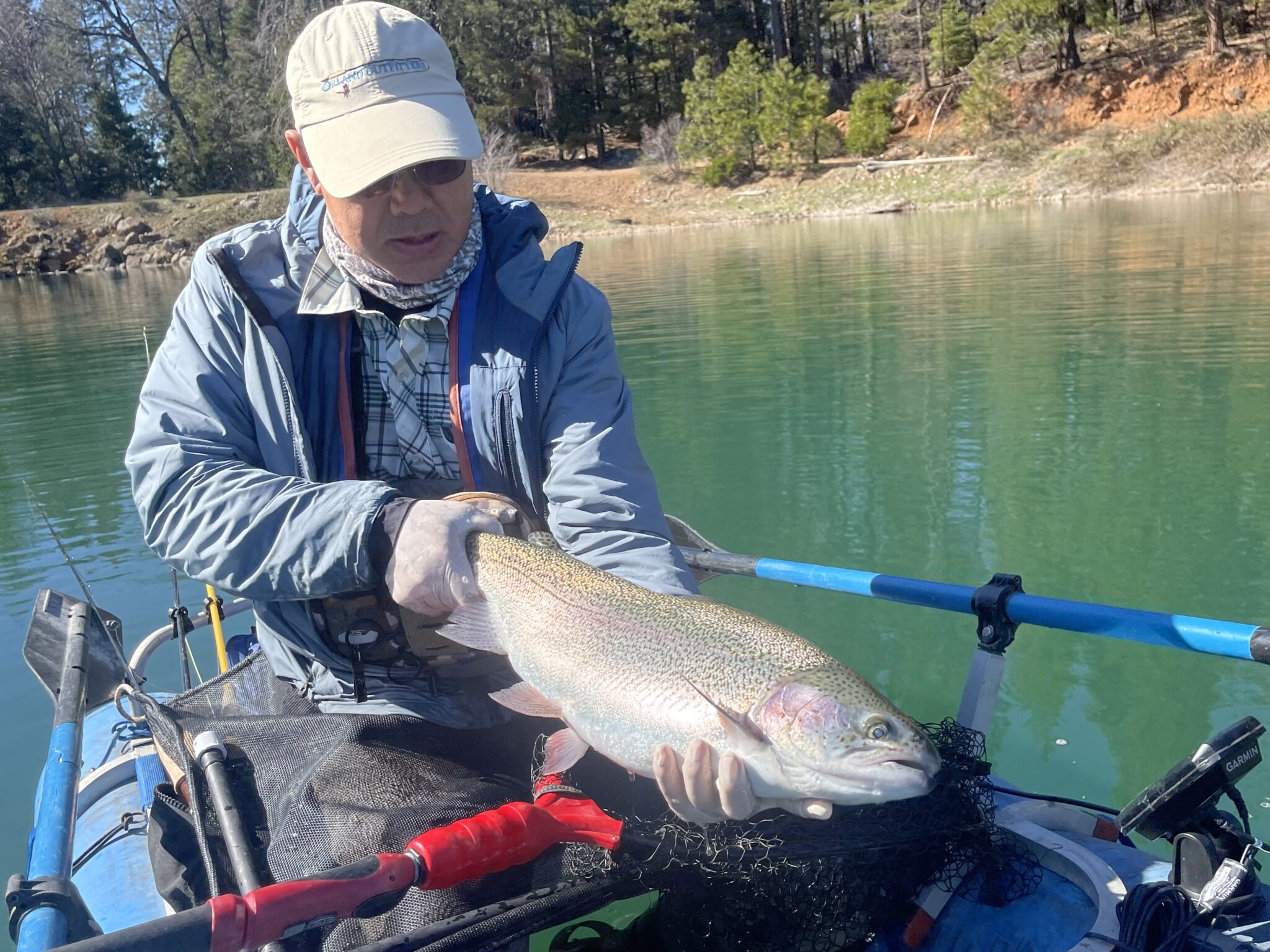 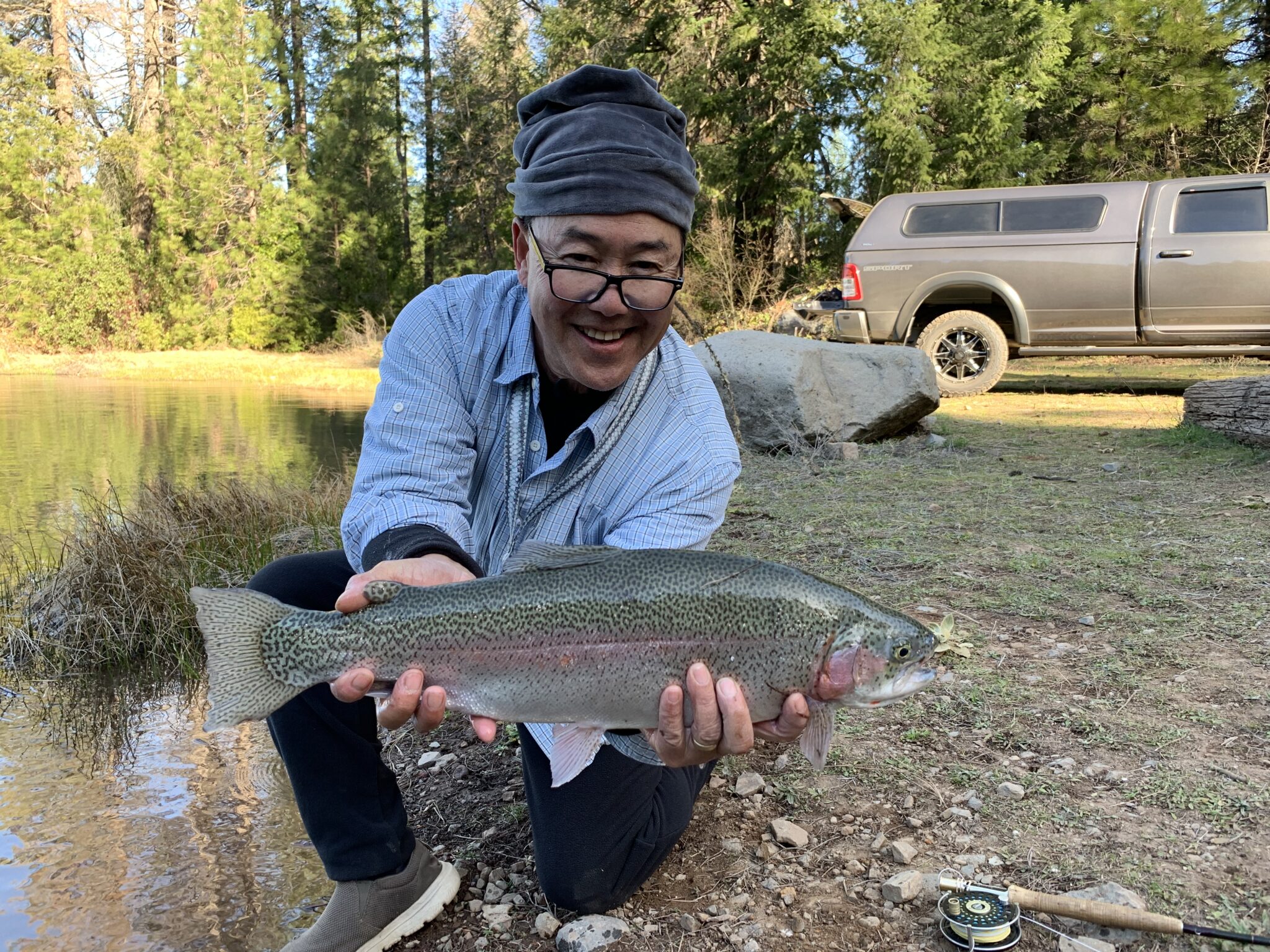 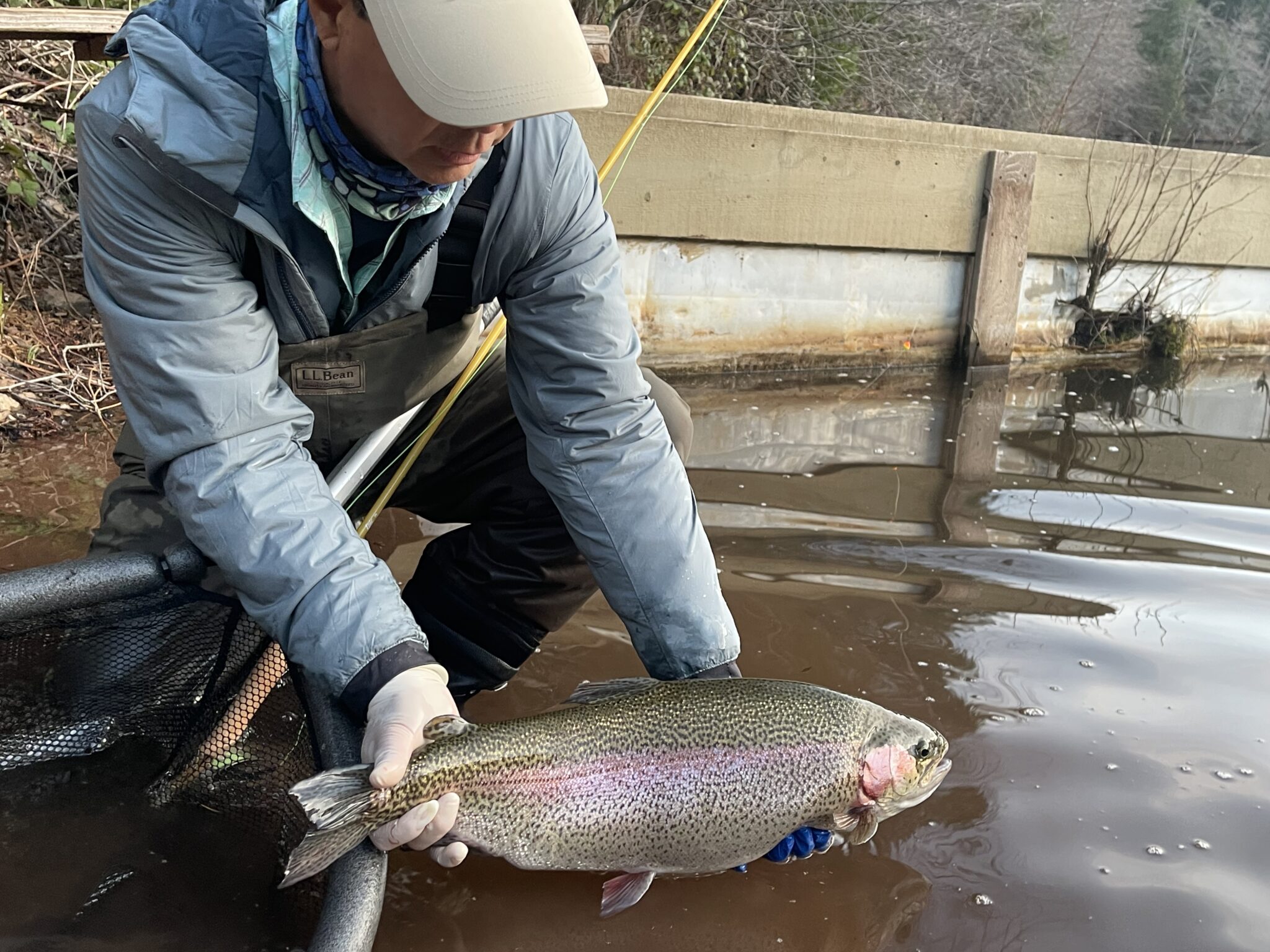 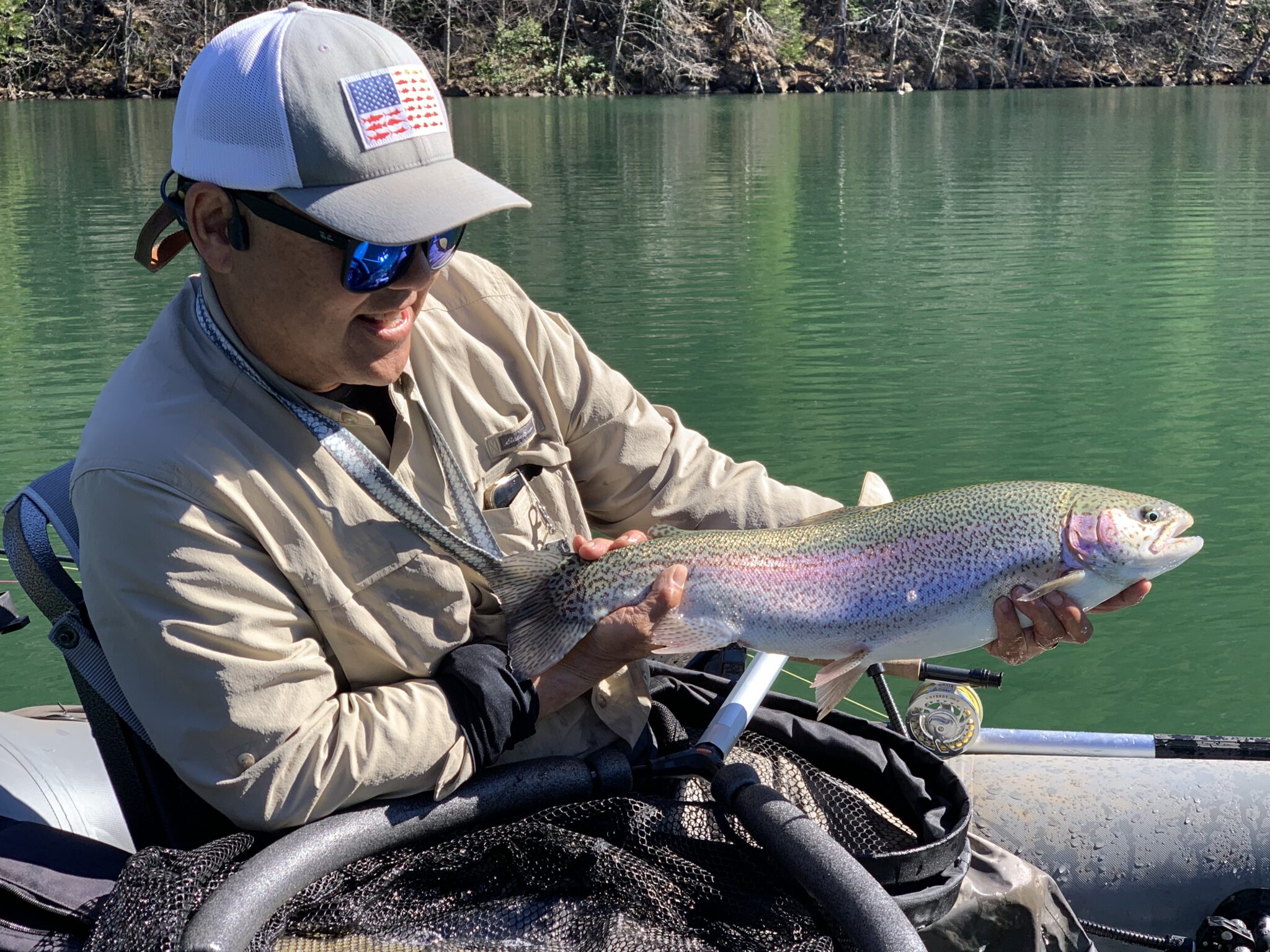 This place has the highest quality fish and numbers of any place I’ve fished.  A bit pricey  but the quality of fish puts other places to shame.   Wayne Syn

I’ve never really fished Henderson Springs before April and the place definitely had a different personality than years past.   The fish were bigger than years past and the water level was significantly higher than the last time I was there in April of 2021.   Nearly all last  season,  Mark  Henderson has been worried about  severe drought  dropping the levels of his manicured ponds to a such a low level that they couldn’t sustain trout.   It got close to that last year.   This year the ponds were on average 85 percent full  and like the rest of the country,  seems to be recovering in a big way.

Wayne and I together fish pretty hard.  Watching Wayne fish a brand new place is like watching a chessmaster sitting down to play a new opponent.   He outfished me this weekend as usual and I learned some things from him even though he’s never fished the Springs.   We pumped fish and found some large chironomids but most fish that we examined had very empty guts.  More fish had organic detritus in their stomachs than live insects.   Perhaps these early season fish were still acclimating to the food sources since they were planted in January, despite there enormous girths.   We tried lots of different techniques and we came to the conclusion that you you need  type 6 and a type 3 sinking lines.   Flies that worked well – Olive size 10 leaches,  Burnt Orange Seal Buggers, Olive , Red, Black  Chironomids from size 14 -18,   size 16 Copper Johns in almost any color slow crawled on the bottom with a type 3 line.  My favorite line was a SA Sonar  type1/type3 uniform sink stillwater line slow stripping small nymphs over fish on the bottom located with my fish sonar.       Fast stripping leaches with a Type 6 line or trolling was also very effective but my leg cramps limited me to a couple hours of that a day at most. Indicator fishing Henderson was most effective with an array of small chironomids  down 12 feet under an indicator.     If we aren’t catching a fish at least every 15 minutes,   we moved.    We were easily able to catch many fish but what was impressive was that every 5th fish was over 5 lbs- fish with girths over 12 inches were common.   Many fish were caught between 8 and 10 pounds.   There was no Topwater feeding but once in awhile you would see a swirl and casting streamers to a ring in the water  was more often productive than not. 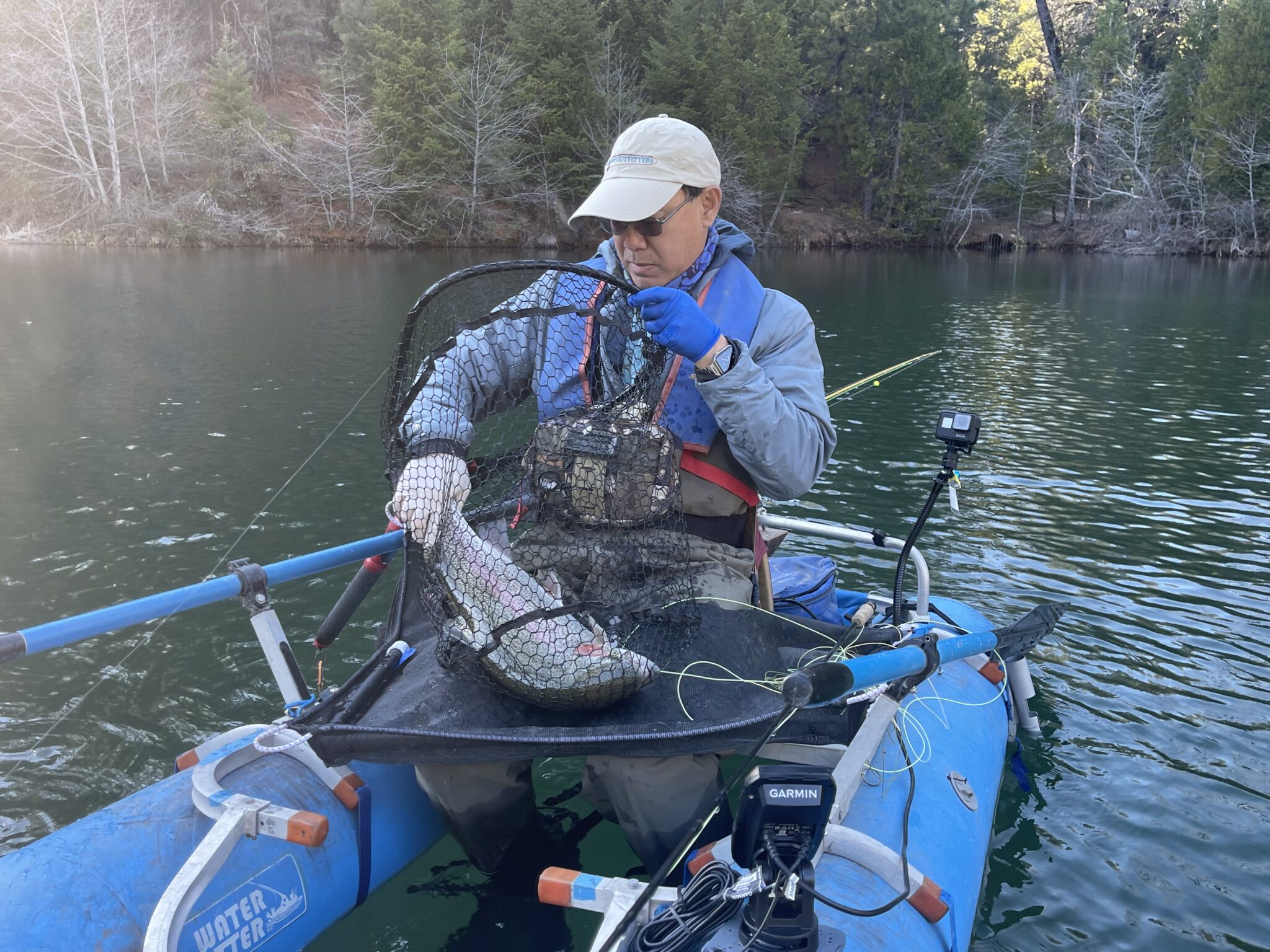 Wayne H, (retired CEO) who has been taking care of the ranch for Mark over the years mentioned over dinner that they put 8 fish in the tiny pond next to the lodge that nobody really fishes.    The first morning,  Wayne decided to tune his setup in the lake and to our surprise, he hooked fish.  As I watched in disbelief, he caught 8 fish in a row which seemed to be every fish in the puddle.  Those fish planted in January probably were super hungry and fly virgins.   None had hook holes in the lips.     The next evening,  4 more trout were caught out of the tiny pond including one about 8 lbs.    Wayne H caught the beast on a chironomid\indicator and admitted that there may have been more than 8 fish planted but not much more.     I found it interesting to experiment  with these fish to see how long it would take to catch one of those fish again now that all the fish in the pond had been finally caught once.     How long before a Henderson Springs Ranch rainbow trout gets caught twice?   The next morning,  I threw the kitchen sink at them and didn’t get one bite although I had one follow.    Not really a controlled experiment,  but I see the possible benefits of resting a lake for a couple days before pounding it again.  In the last hour of fishing,  I helped Norm land a ten pounder in Clear Lake that had one of our groups flies in its mouth that had broken off.   However,  I pity the group that follows us up the following week if the fish have a long recovery period.  It will be interesting trying to catch these fish again in April. 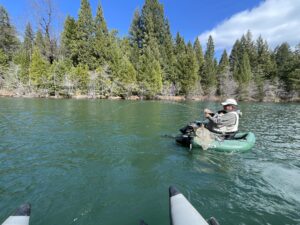 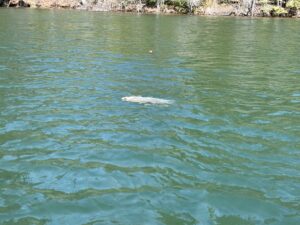 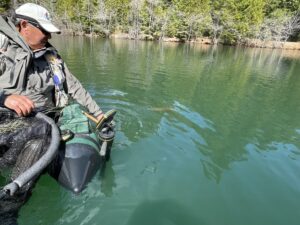 Mark Henderson and I talked briefly about the healthy large fish in his ponds.  He told me that  each year he puts 3000 pounds of fish in  each of the major ponds.  Clear lake has native brook trout that spawn  but there is no source of fertile trout available for planting left because of invasive species fears.   Gone are the day of planting fertile fish but remember what happened at Jurasik Park – sometimes nature finds a way  (pyramid lake?).     The art of trout rearing has become so perfected that growth rates, phenotypic traits like “jumping”,  resilience to being repeatedly caught, and longevity can be genetically optimized.  Mark Henderson has a long relationship with the hatchery that supplies his fish over the years and stocks an incredible trout.   Most of the big ones (5-10) lbs have fully formed fins and large girth to length ratios.  Some are as acrobatic as steelhead and some can holdover several years in the right conditions.   After a little research on how long an average stocked trout lasts,  I found the most recent study done in 2018 by the American Fisheries Society, however it’s major conclusions seem wrong when it comes to Henderson Springs Trout.   According to the study  60 out of 100 don’t make it past the first week and trout don’t tend to move much after being stocked.   Ultimately quality lies in the genetics of the stocked fish .  Stocked fish never turn wild,  but they can certainly look wild and  stocked fish often take attractor types of retrieves and patterns that simply do not produce over wild fish — not on any regular basis.   As trout acclimate to the local food sources,  wild trout like behavior takes over out of necessity and experience, and genetically enhanced fish grow at a much faster rate.  A great read on this subject is a book titled  “An Entirely Synthetic Fish: How Rainbow Trout Beguiled America and Overran the World”  available in paperback. 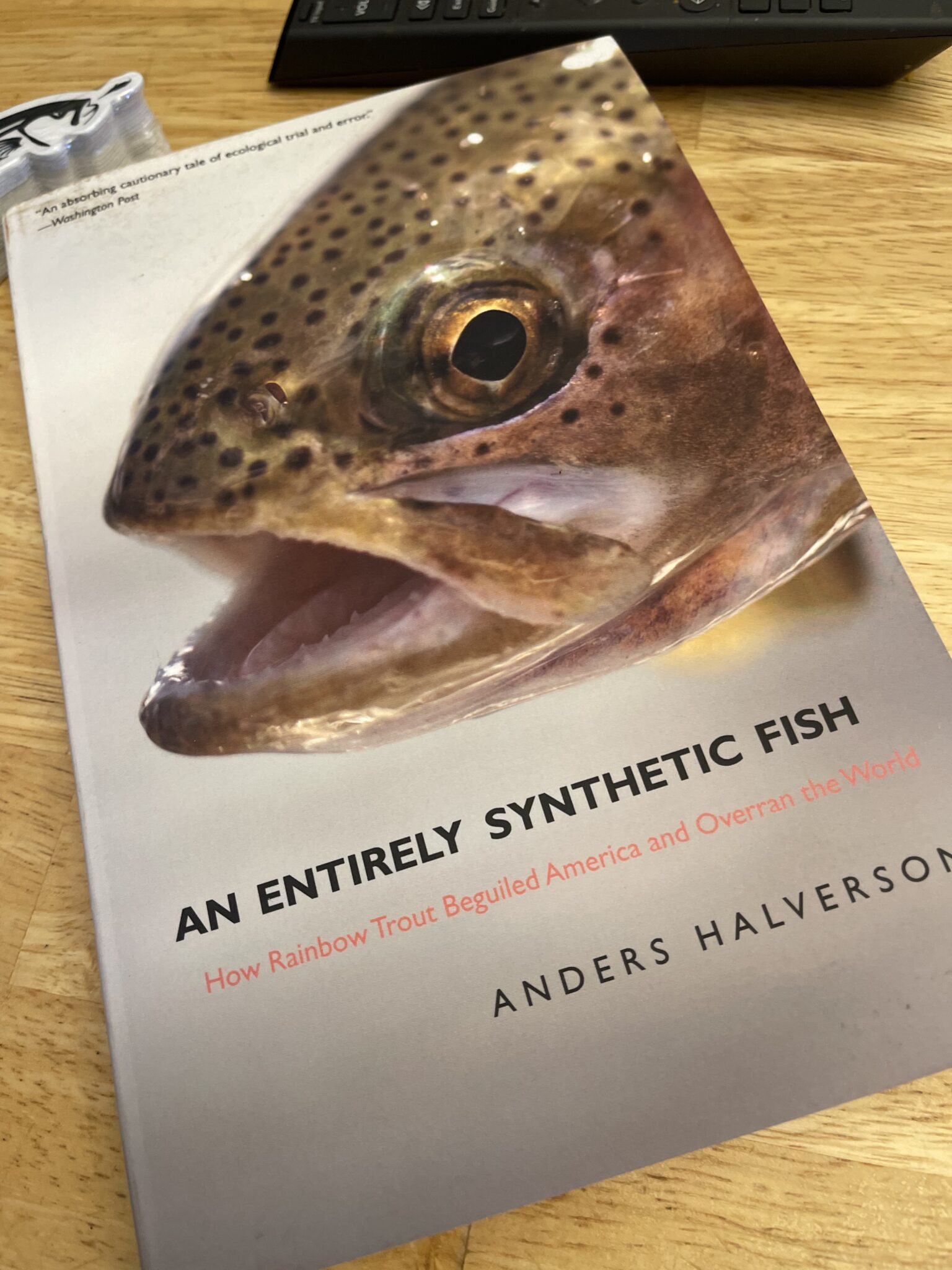 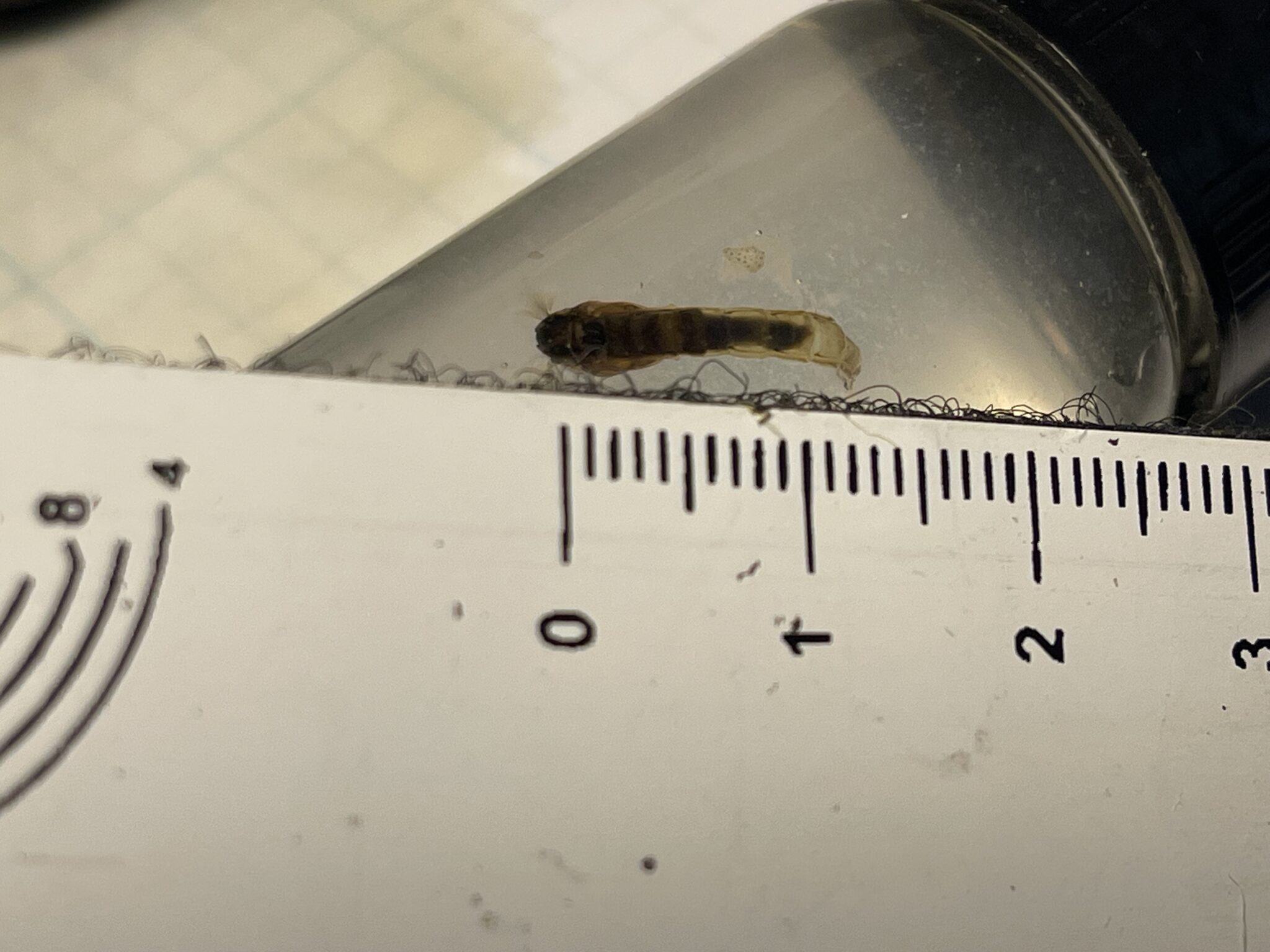 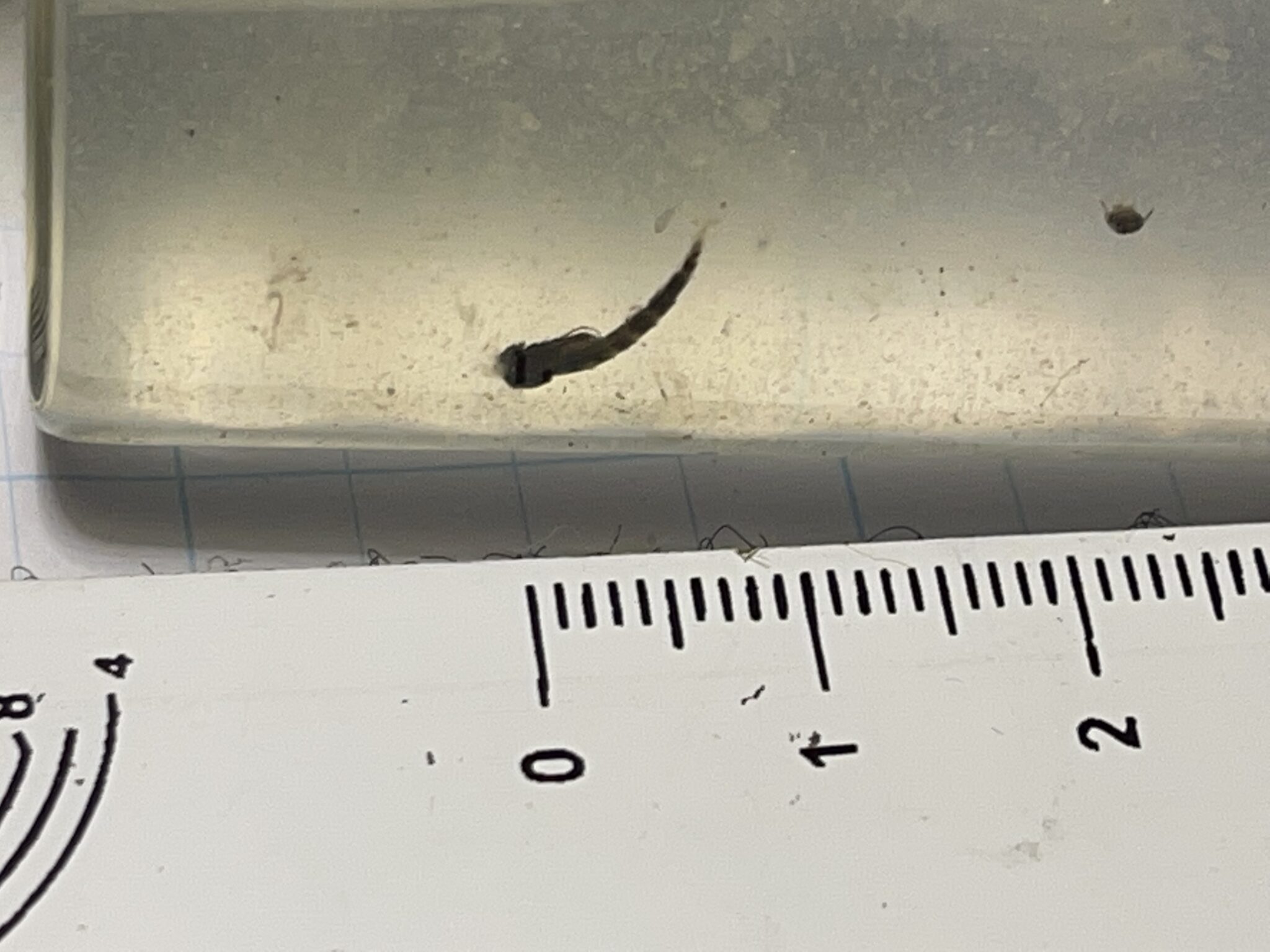 One of the highlights of the trip is the campfire at the ‘Stonehedge” fire pit on Long Lake.  Again the group gathered- the Waynes,  Peter, Norm, Bob, Jerry, the Henderson’s, Melissa, Puck, John and I.  Norm entertained us with gold old fashion humor and commentary.  The wine and bull shit flowed till the embers were glowing.     I’ve become very fond of this group even though  I only fish with once a year.   I am grateful to Jim Cramer for introducing me to them.  Malcom Gladwell once wrote about Mavens, Salesmen, and Connectors in his book “The Tipping Point “.  Mavens are individuals who spread influence by sharing their knowledge with friends and family.  Salesmen are individuals who naturally possess the power of persuasion and Connectors just know a lot of people. Connectors gain their influence not through expertise, but by their position as highly connected to various social networks and in our case, networks of fishing groups.   Jim was a Connector  ( RIP).   Norm  (the lawyer) is  the Salesman and Wayne H (the local knowledge)  as the Maven.  As one of the youngest in the group at 65,  I am a better fisherman and person to know this group of fine individuals.   Next month is our annual Memorial trip and most will be returning for a fly fishing “booster”.  I cant wait to try some new things Ive learned this trip. 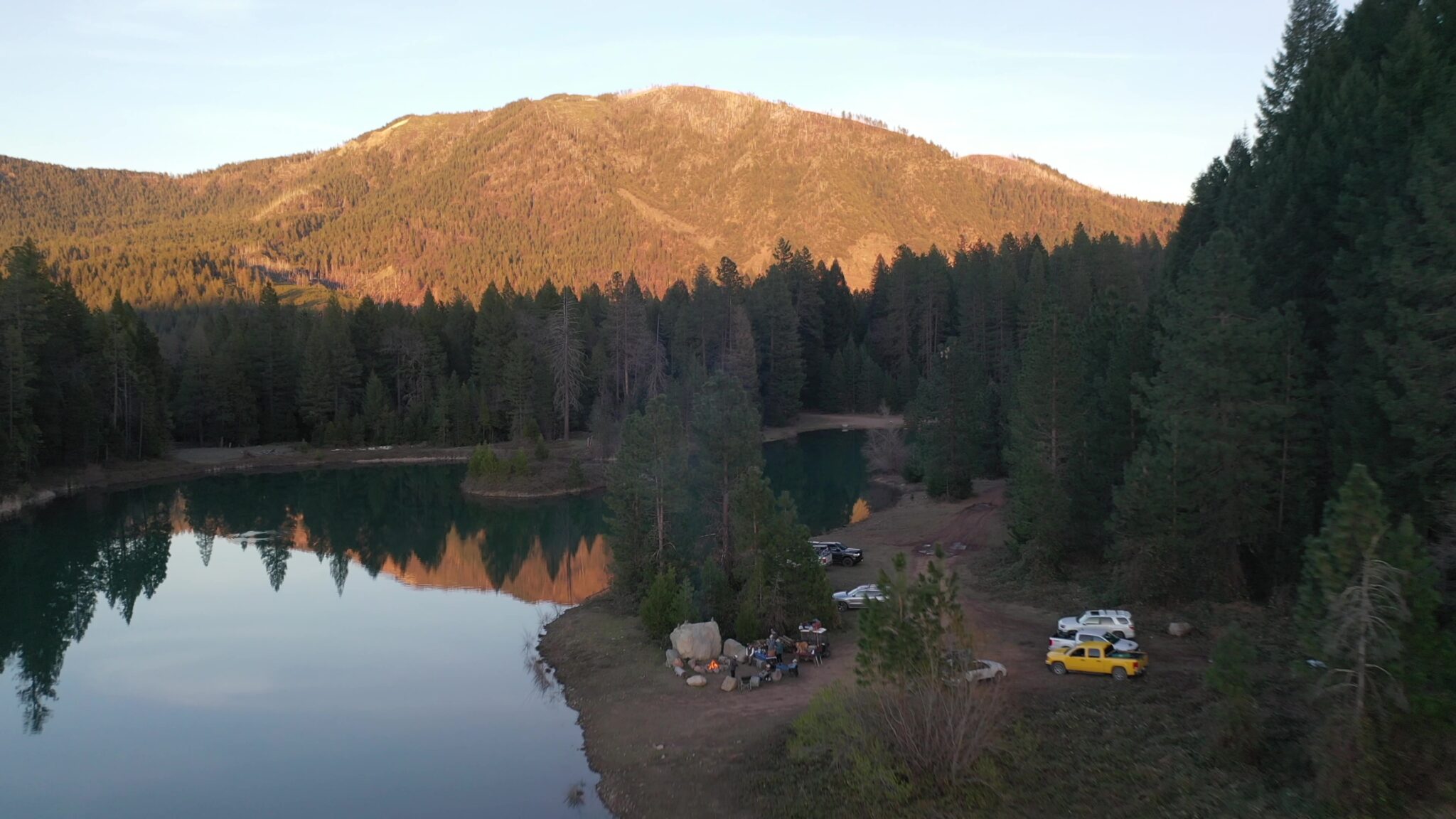 A big thank you to Mellisa and Puck who for the second year fed and entertained us like the rock stars we want to be.  Mellisa is the Queen of Culinary for many rock stars and performers in her day job.   I think its because she use to be a great Dental Assistant in a past life  but I am biased,.     We are so lucky to have them and they they have become part of our group.   Now when I hear the  song  “Sweet Mellisa“,  I start salivating like a pavlovian dog.  Good Food, Wine and Comradery every day after fishing just makes this annual trip so enjoyable.  Also a big thank you to Jerry for making breakfast every morning.   Peter,  I hope we fish together again and thank you for sharing your favorite foods with me and showing me that spectacular bamboo rod.  Jerry,   never let a 35 dollar rod get in the way of a 350 dollar day.   Bob,  you are the most fit 80+ year old in a float tube that I know!  Norm,  you have incredible skill,  I have never see a fly fisherman force a ten pound trout to switch flies in mid fight.  John, I can only hope that I can experience a fraction of what you have done in your life which is amazing.   To Wayne H,  you will always be the longest… 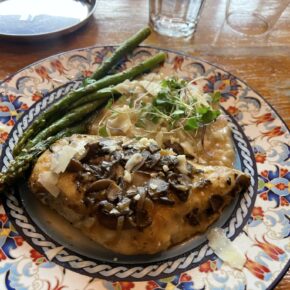 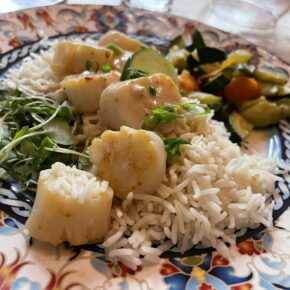 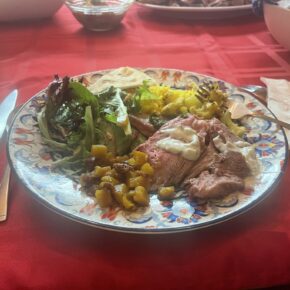 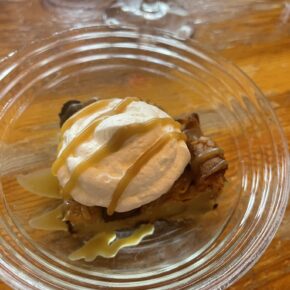 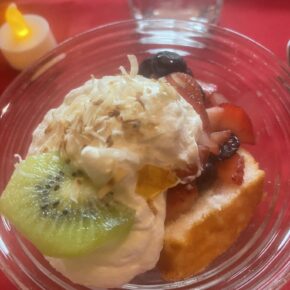 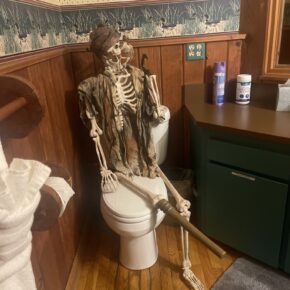 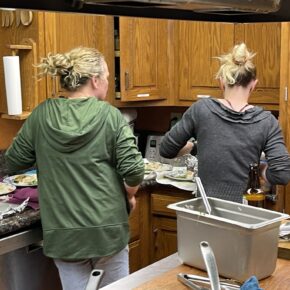 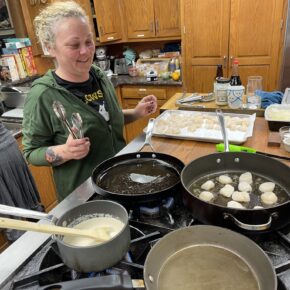 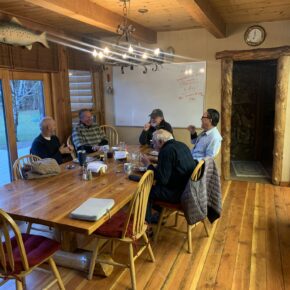 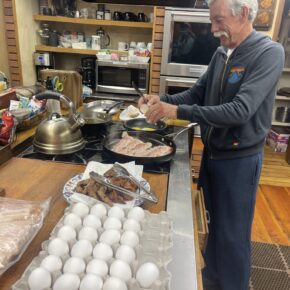 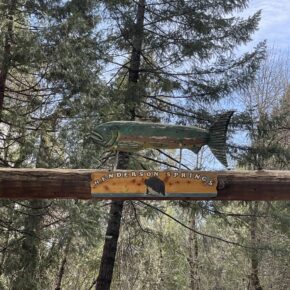