Yesterday she was a baby and today she is an adult. Logic tells me that this is an absurd concept but now my baby girl can legally get plastered, gamble all her money away and do things without my permission legally. But,  she wont because somehow, someway, Gina and I have raised a hard working, intelligent, and ambitous woman.

Yesterday for her Birthday, we booked on down to Bezerkley and took her to her favorite reastraunt–Chez Panisse , known for using local, organic foods and credited as the inspiration for the style of cooking known as California cuisine. and  owned by food activist Alice Waters.  Chez Panisse has been listed by Restaurant magazine as one of the top 100 restaurants in the world and Gourmet magazine named Chez Panisse the Best Restaurant in America.  Michelin Awarded the restaruant a one-star rating.

Funny though,  throughout the meal the most entertaining thing was how my son Mark who is not much on quality as he is in quantity kept asking how much our tab was up as we progressed through the meal mumbling something about how many cheeseburgers you could buy with 80 dollars and how the 99% ers should be camping out in back to protest the gluttony and hypocrisy of a $500 meal. 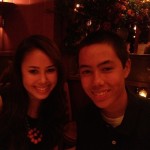 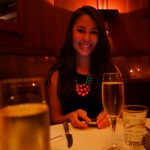 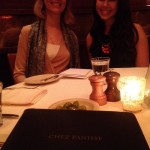