One of the reasons I built the Hackintosh was the ability to Dual Boot between WIN7 Premier Pro 64 bit with CUDA support and Final Cut Pro on OSX with a fast processor. There is no doubt that the the mercury engine is working on the Windows 7 partition so I decided to try the same render on the OSX side. Both Premier Pros seem to render equally fast on my test footage suggesting that the mercury engine is working in OSX. 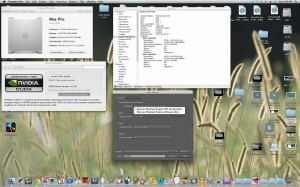 Recently I spoke with an Adobe Premier Developer friend (the luxury of living in San Jose) about how disappointed I was with the multi camera features in the newly updated Final Cut X 10.0.3. I use to use Premier pro exclusively until the advent of ProRes for DSLRHD footage. We discussed how I liked the scrub-able thumbnails format in FCX and also how I prefer the ease of  the color correction and stabilization features is OSX (as used in my recent UFO footage). He told me that all these issues are addressed in the new and improved CS6 soon to be released. CS6 will be optimized to use OpenCL-based AMD Radeon HD 6750M and HD 6770M graphics cards in Apple computers (and Hackintoshs) running OS X 10.7. Interesting to me is that the new CS6 Premier is taking from Final cut the things I use most like scrub able thumbnails, built in background rendering stabilization, and adjustment layers that empower you to adjust large ranges of clips all at once in a simple fashion. Plus there are the thing unique to premier that are definitely better than FCX like its integration with After Effect and workspace customization.  It appears that this editor will soon be editing on Premier again.   Especially editing many different formats at once –GOPro , Lumix GH2,  Nikon D7000, Xacti and Iphone footage all on the same time line without pre processing to ProRes.  Google whats new in Premier CS6 and be amazed. Its a complete rewrite with 50 new improvements. Time to come home to Adobe.