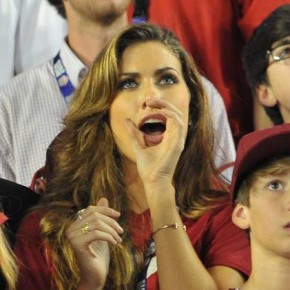 The BCS college football season ends with The Tide drowning The Irish in a blowout that not even Rudy could have saved.  Although the game started out like an Ducks Beatdown Romp, it was nice of Mussberger to break up the monotony with a ” babe sighting” . Entertaining was his semi rapist ogling –“Wow, I’m telling you quarterbacks: You get all the good-looking women,” Musburger said as the camera focused on Katherine Webb (former Miss Alabama) “What a beautiful woman. Wow!”

The next best moment had to be the fight between AJ and Barrett which resulted in the center pushing his quarterback in a tasteless display of immaturity. These are the national champions? 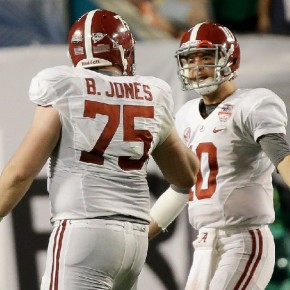 Oregon showed off its offensive firepower in the Fiesta Bowl, last week,  by putting up 35 points on Kansas State and while we will never know whether Oregon would have fared better than ND, it is tough to imagine that Oregon would have been humiliated in that manner by doing worse. And still, Alabama has never defended against a fast paced offence like Oregon’s ever. Chip’s No Huddle, No Mercy Offense could have been the one thing that could have beaten the Tide’s defense. The Ducks finished the season ranked #2 in both the AP and USA where is should have been all regular season. I cant wait for next year.  I told you that Chip would stay.  You are a legend in Eugene and an icon of the future of PAC 12 Football.  Its not about the money or the rumor of recruiting scandal.  The house that Nike Built is favored by the football gods. After 4 years of getting closer and closer to the BCS national championship,  this is your moment in time Chip. Look at the great recruiting class coming in and realize that your star players are freshmen and sophomores   The NFL will wait for you to achieve your dream. 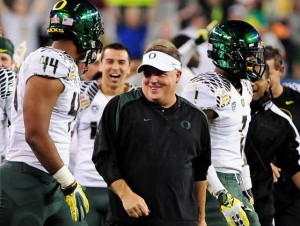 Have you heard the latest?   Stanford is being picked by the media to win the Pac12 next year.  Are you kidding!  How hung over would I be today if it weren’t for a quarter inch right on an overtime field goal.