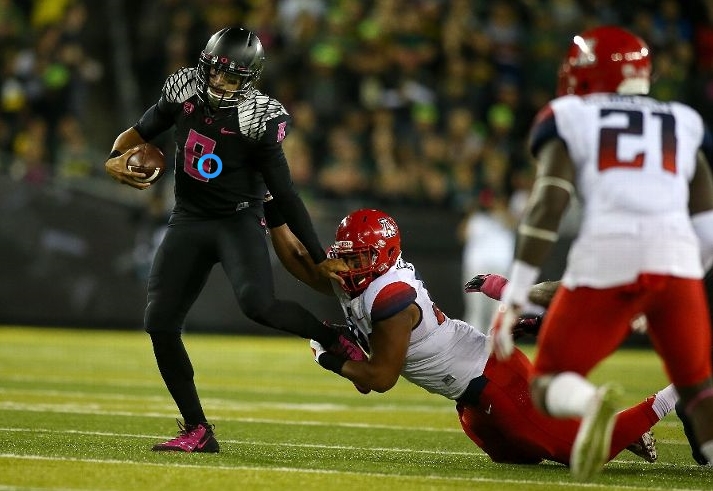 Having both your favorite college football teams beat by the same team  is a new type of agony.  The Arizona WIldcasts for a second year in a row upset the Oregon Ducks. Two weeks ago they beat CAL with a Hail Mary pass.   You can blame last nights Duck fail on many things that are not that surprising.  The offensive line is doing poorly protecting Mariota in the pocket.  Over 15 sacks in two games against relatively weak defensive line teams is not going to cut it against Stanford and UCLA.  But Washington’s celebration penalty really hurt bad and changed the outcome of the game.  Despite the Oregon flaws,  we should have won had it not been for the 75 yards of ridiculous penalties.  Come on young Ducks,  you are shooting yourselves in the foot.  Chill out and be more humble.   I think you can still be fierce without walking around like a rooster after every good play.   Follow your quarterback.  I for one keep hope alive for the Ducks.  All is not lost.  There is no way that Arizona will run the gauntlet of the pack 12 undefeated and only UCLA and Arizona are left undefeated in all of the PAC 12.   Even with a loss,  the Ducks still are tied for the lead in the Pac 12 North since all the north teams have lost at least one game.  The south has the last two undefeated teams and we are scheduled to play UCLA and Stanford who will most likely beat Arizona.    If Arizona goes 5-0 in the Pac12,  they have to get a national ranking and if they win the south beating USC and UCLA.,  and Oregon winds the north beating Standford,  We will see Arizona again this year in the north south Pac12 playoffs.    I predict that the Pac 12 champion will have losses at the end and being that it is the strongest conferences,  should be in the final four.   Will the National playoff committee look at a one loss  Pac-12 champion and give them the playoff spot over a 2 loss  team that played a weaker schedule is the question of the day.  I think there is still hope for the Ducks because the Pac 12 is that much better and the computer knows it  (unless its programed by the refs!)