I remember back to 1997 when we use to transfer  WAV files via 1200 baud modems through “Fear and Loathing in Silicon Valley”–our BBS pre internet.  In those days, its was about size and not quality (thats what she said)  and thus WINAMP grew out of the need for a better way to play back compressed music.  Ripping off the Fraunhofer codec to compress our music-MPEG-1 Audio Layer 3–  was the beginning of the IPOD revolution.  From 1997-1999,  Carabelli Multimedia Servers were the sole source of the Winamp–my little part of digital music history.

As the years have passed, it is now about the quality and not the size. The perfect Audio server today. — Bitstreaming non compressed multichannel audio.

The only way to achieve this today, is with hdmi audio since optical SPIDF no longer caries enough band with to support 8 streams of uncompressed audio simultaneously.   Fortunately, with the advent of Intel’s Clarksdale Processors there is now native hardware support for HDMI bitstreams of HD audio formats like Dolby True HD and DTS Master Audio.   The next step was to find the perfect software to bypass Windows inherent modifications of all audio passed through the operating system  thus allowing the audio to Bit Stream and pass in its native format to the Decoding Receiver.

The key to playing our Library of HD music is the software.  The player of choice is Foobar 2000.    Also needed is WASAPI which allows Foobar to bypass the Windows protected audio path.

1.  I3 based Windows 7 computer with an old Asus XONAR card

The Audio Workstation also acts as recording studio for our Disclavier Grand Piano and Guitars.  With Mark now getting pretty good at the guitar and starting to lay down some cover songs we also use this workstation  with Pro-tools, Sonar,  Mixcraft, and Reaper  (Justin Frankel’s latest project).

The downside of the whole project however is now the daunting task of replacing my entire music library with the least compressed multichannel versions available.  Got terabytes ready! 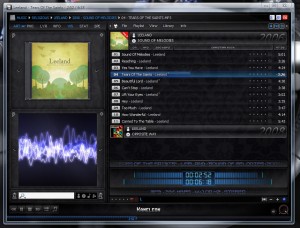