The tide peaks at 7:00am. Hope the wind dies down.

The Gods of fishing were kind to me on my  first official day on the Delta on my own.   As has been mentioned by many “experienced”  Delta flyfishermen,  the Delta is truly a river that runs in both directions.  Current is the key.  My neighbor at Sugar Barge , Bill Siler and I shared some stories and a beer the the night before and he offered to let me follow him out and fish near him.  We took off at  7:00 am for “Yellow House ”  below Three Mile slough.   I fished the point between the San Joaquin and Three Mile Slough because there were birds diving for bait there.  I picked up half a dozen really small fish but I did get them all on the suface with a crease fly.  There were no big fish working the bait but I sure saw lots of big fish on the meter which convinced me to get the t-14 out and dredge for them.  I ended up with a couple fish above 18 inches but nothing big.   I watched Bill fish the flats below “Yellow House”   and we split up from there.   After spending an hour anchored in Fishermen’s Cut to avoid all the boat traffic and take care of some phone calls,  I decided to fish the north islands  of Franks track.  Wayne called me while I was in  Fishermen’s cut  and mentioned to me that someone on Dan Blanton’s BBS caught 90 the day before!   I read the post by Bob Arwine’s  and switched to smaller flies with a pulse disc and started catching fish!  Working my way around the wind protected islands “Roundabout”  the  North shore of Franks Track,  I caught lots of stripers fishing the up current shoals and edges of the many islands.  I caught two large fish,  one fish I estimate at 13-14 lbs and the other more like 10 lbs.  Two over ten pound Stripers in one day  is a rare thing for me and has not  happened since there was water in San Luis.  Even with the bass tournament traffic and the wind,  there are plenty of places Ive seen so far that one can concentrate on catching fish in relative solitude.   I spoke with James , a talented local flyfisherman, last evening as he was gassing up his skiff.  He throws a double Pole Dancer that looks like a sailfish teaser!   The two  large fish I caught today were in the same area as dinks.  So, I’m a bit hesitant to run immediately from the dinks.  I don’t think that Dinks preclude or lessen the possibility of a monster.    I love this place 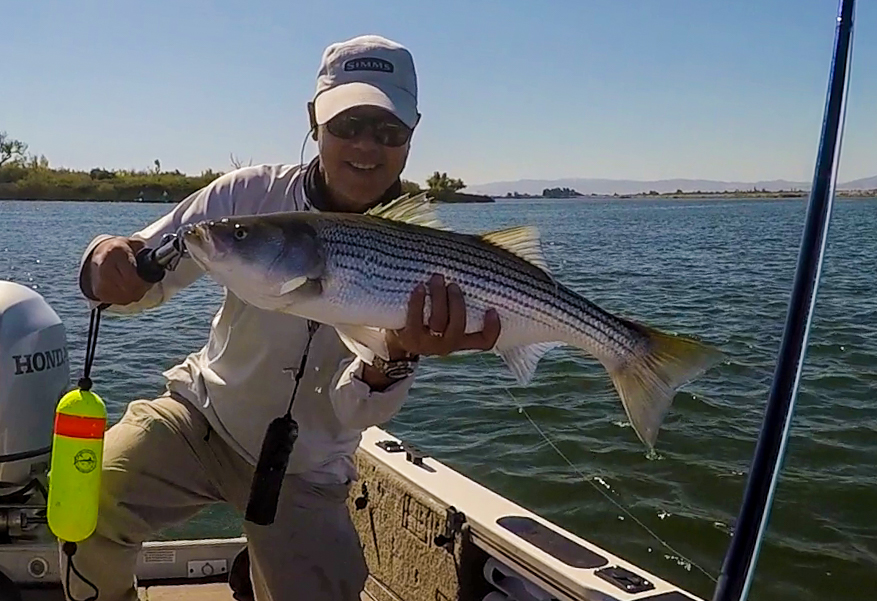 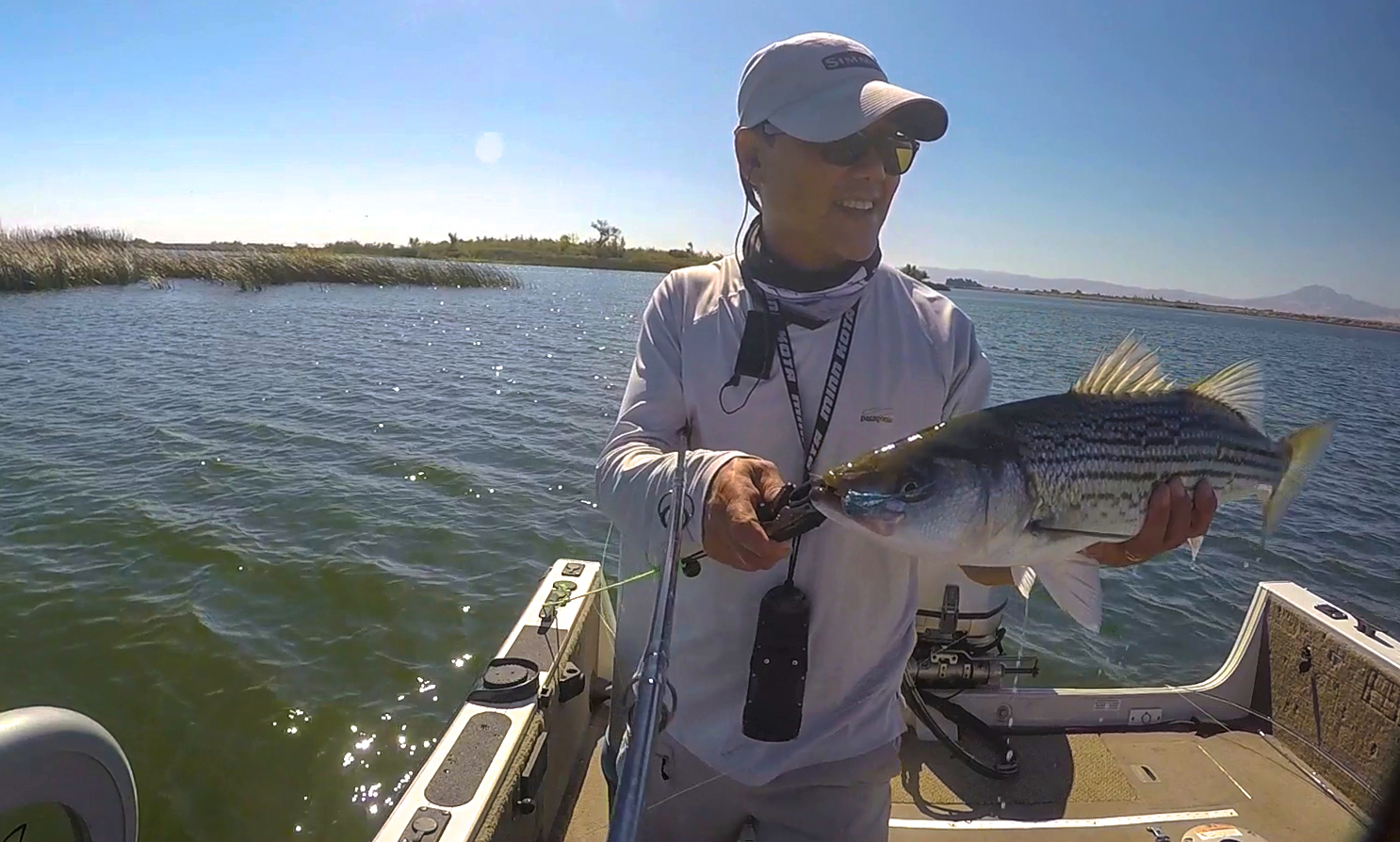 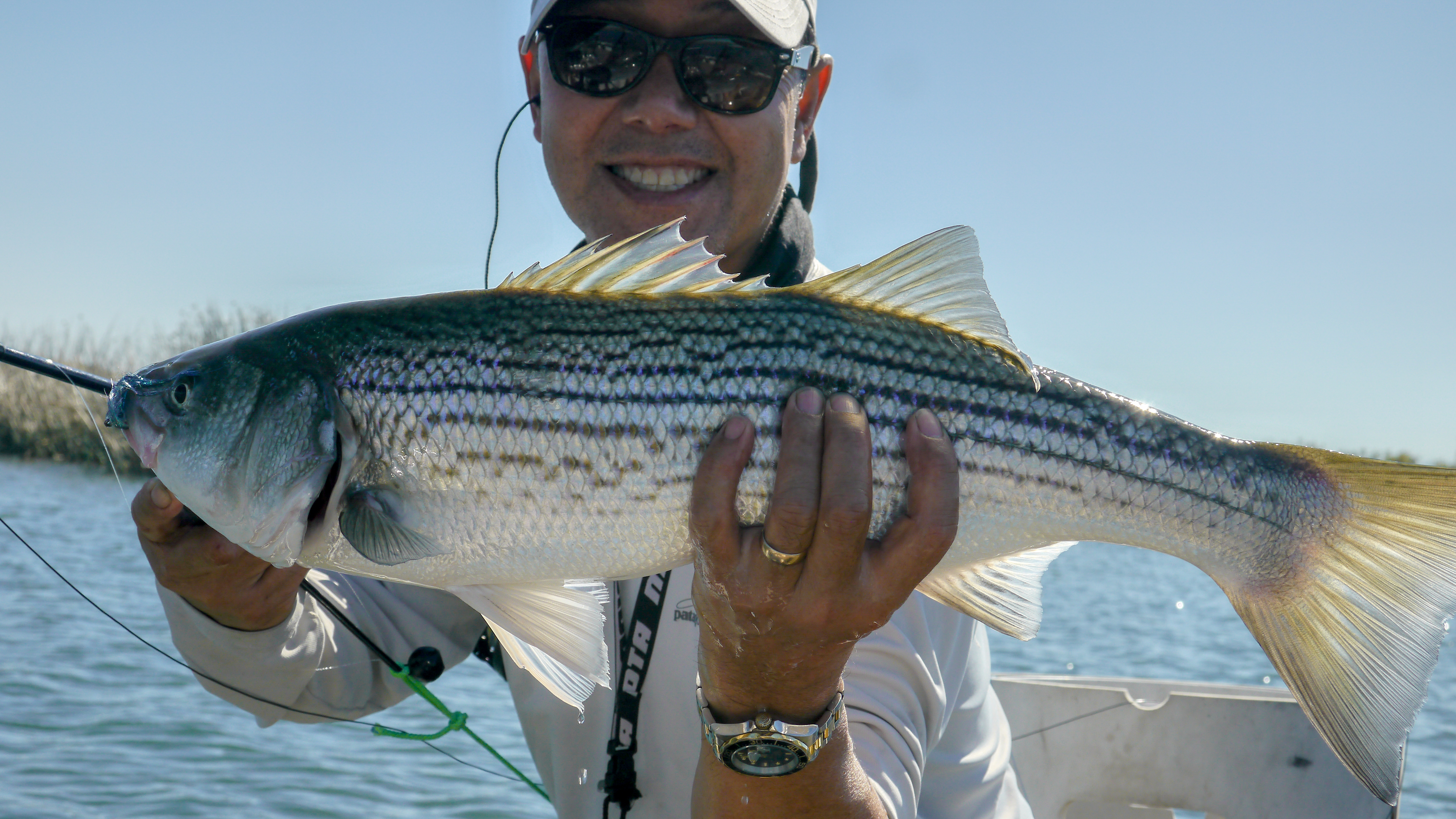