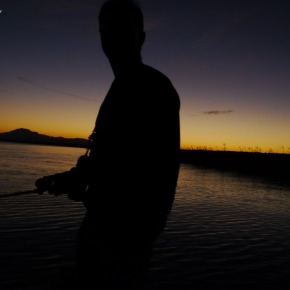 I decided to put a  couple hours into the delta this weekend Sunday evening and Saturday Morning.  Sunday evening was breezy and I managed a couple fish right before dark while listening to game 5 of the World Series.   I was hoping for some top water action but the fish were a no show.  The minnows were there in the flats jumping around before dark .  An occasional Black Bass would swirl bait close to shore but no rippin’ double digit stripers to be seen.   I came in around the 5th inning in complete darkness which is a trip.   Navigating the Delta by chart at night is like flying with instruments only.   The light from my Lowarance HD 10 is the brightest light in the boat and lights me up like a jackolantern.   It must look weird to other boats.   Im pretty comfortable coming back in the dark now if there is no chop and wind.  I think I can find the secret passage through the weeds at Sugerbarge to get through the breakwater right next to my slip.     At least all the duck blinds in the middle of Franks Track don’t have loaded guns pointing out of them at that time of night.  It was very tranquil and peaceful fishing the evening at the Delta.  In the evening, there are no crowds and only the sound of fish jumping and coyotes (and of the Giants owning the Royals).  I never fished San Luis at that magic hour since I was always trying to get retagged and the Lake park closes before sunset. 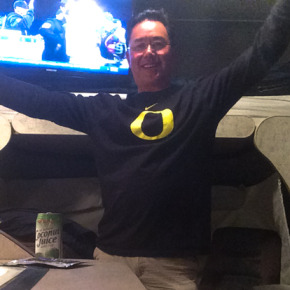 I got back to the motorhome and watched the end of the game while preparing and eating dinner.   It was not as good as being there but every time the Giants did something good,  you could here yells and cheers around the RV Park.   I think I heard celebratory gunshots in the distance as  Vogelsong pitched the last strike of the game to shut out the Royals and put the Giants on the verge of another World Series Victory.  It going to be a great game on Tuesday.

I got some bad news from home.  Nick Gray had a minor emergency and was recovering at my home with my handicapped wife which meant I needed to get back San Jose a bit earlier.   I decided to fish half a day on Monday before heading back to San Jose early.    Originally I was going to fish the West Delta where Wayne got that pig three days ago,  but decided to fish the SJ west of Franks Track.    It was all new water I was fishing.  The fish were not that cooperative till the first half of the falling tide around 10:30.   I managed a dozen fish all around 17 inches and it was hard to find them.  I found them in small canals in the deeper water.   No big stripers today.

Again, as I was getting ready to leave and get home,  I made a couple casts into a tailout formed by an island in the SJ.  As the t-14 swung down current on my 7 wgt Method,  I started retrieving it with short strips.  Halfway to the boat,  I thought I hooked a good striper and then it jumped.  Another salmon!    Same fly also-  the Black Blue and White Angel Hair minnow pattern with a pulse disc.  It must look like a sardine wrapped Flatfish (not).  I played it to the boat  and noticed two long green tags sticking out the back of the fish.   I could see writing on the  tags.  The fish was barely hooked and I knew I would have probably one chance to tail or Boga the fish.     I thought the fish was played out as I leadered it and started to pull it toward the boat,   The fish began to thrash,   all I could think of at that moment was to grab the tags.   With tags in hand,  the fish thrashed out of my grip and all that was left were the tags in my hand and an empty Boga grip.   Oh well,  no picture but I did get the tags which have a phone number and serial number.   Confucious say “you can’t land a 15lb salmon by the tags…”

I called the Number on the tags to report the location and estimated size of the Salmon,  but all I could get was a recording.  I called 4 times as I was driving home and no voice ever answered the number.  Ill try again tomorrow but it seems that raising and tagging a salmon in order to get those critical data points to make policy is an expensive and difficult endeavor.  I can appreciate that,  having done similar research at Davis.   But the fact that It was so difficult today to even report the tag,  makes me think that others would just not bother after the first call which calls into question the accuracy of the studies.   Its great to have all sorts of “facts” about delta salmon,  drawn on research,  but the DFG isn’t making me feel very good about the actual research given its been difficult to report the tag.   We will see tomorrow.  I would really like to know some stuff about the fish if possible.