The Last couple weeks has been mayhem and its been 3 weeks since Ive fished the Delta.  Work is seasonally busy, and its been a challange  supporting my wife and father in law with some pressing health issues.  And with Christmas around the corner, its been busy.   Judging from the Delta Reports these last rainy weekends,  its been tough and I was wondering why every one was leaving Sugerbarge till next year.   Is the winter fishing that bad?   Checking the weather reports for the last week,  I finally saw an opportunity on Sunday to fish  given that there were no emergencies to keep me home.   I drove  up Saturday night late and was worrying about the boat being in the water for so long without me checking on it as well as the state of the Motorhome sitting at Sugarbarge hopping it hand’t been over run by raccoons or mice.   I went straight to the boat,  and to my surprise,  Blanton’s and mineI were the only boats left in the dock.   The boat was covered in spiderwebs and It looked like some birds started using it as a bathroom.    I cleaned the boat up and bilged out quite a bit of water from the boat.  The rains must have filled it. Started it up, and went through the checklist–all was well for an early morning start.    The tides were ok,  no rain predicted,  water temp 58 degrees, and a good solonar period around 2 PM.    I like fishing that  falling tide and though the slack on the way up in the middle of the day. 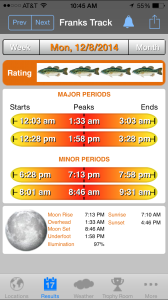 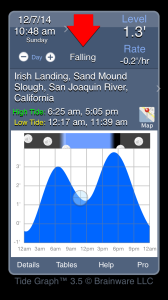 I left the Dock at 7am and decided to look for clear water in the tract.   It was pretty foggy — visability 50 feet–  and there was a ton of hyacinth nearly blocking my shortcut out of Pipers Slough.  The main tract was about 30 percent weed blocked and it was tricky doing the slalom over to Roundhouse where I wanted to start.   I concentrated my efforts on the north wall of Frank Tract.   The fishing till about 11am was pretty slow with a few dinks here and there,  nothing showing and no birds.   I tried topwater,  but nothing happening.   Having never fished the Delta in December,  I figured it was probably the norm.   Around 11:00 things picked up in a big way,  I started catching some nice fish along the walls and shallows.  I also started using some bucktail yellow and chartreuse size 1/0 closers that Bill Siler turned me on to.  I forgot how good (and different)  bucktail flies move in the water compared to artificial hair like slinky flash.  Len Bearden only used bucktail flies even though he had access to all the synthetics.    I picked up a dozed keepers by noon and one over ten.    The fog never  burned off all day, but the winds stayed very light.    I would say that it was a pretty good day compared to December fishing in San Luis with no fish all day.  I think its going to be alright fishing the Delta till April even if am alone,  with Dan leaving at the end of December.

I ran into Vaughn Willet,  near Washinton Cut.  I hadn’t seen him for a year.   We always seemed to end up at the same places as I on San Luis a couple years ago.  He told me that there were a lot of big fish being caught on terminal tackle in the Main Lake this last week.  Several Fish over 20lbs.  Also,a patient told me that he was catching big stripers in the early morning at Del Valle reservoir at sunup on plugs and surface lures.  There sure is a lot of big fish being taken in December this year.   Hopefully the rains will help the fishing now and later–it usually does.

Wayne won the ebay auction for Eagle Canyon opening day and was gracious enough to invite  Mark and I,  I hope to shoot a lot of Drone footage.  Big Trout in a small ponds.  The whole Syn clan is back for the third time…. 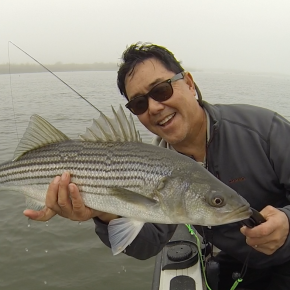 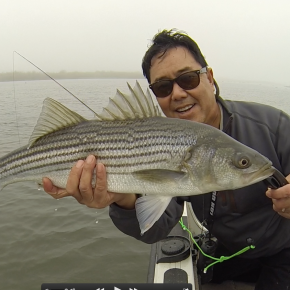 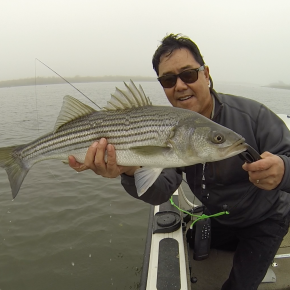 I noticed after posting these pictures to Dan’s forum, that there were Sea Lice on one of the fins.

This answer from Mike McKenzie is interesting and informative.

One thought on “Winter Fishing the Delta..”