December 31, 2021 NEW YEARS EVE – It’s not like I didn’t try hard enough to catch one more striper in the year 2021.    I did get to use my Annual Poppy Pass and Boat launch one  more time. and it felt like making money at least.   It was as tough a day as I’ve ever had  on the forebay.  Not only were all the reports from the day before incredibly slow.   The weather went from sunny, calm and not to cold   to  windy , choppy and freezing wind chill.   The strategy today was to catch ONE fish to end the year and I failed.    I used the sonar to hunt down some schools of fish and I honestly found them where I thought they would be.    Some of the schools I found were over 1000 fish large and as predicted,  they weren’t moving around much.    A glance at the panoptix in “forward” mode showed the fish hugging the bottom around structures and dropoffs–parked with there engines off.    I thought that I might be able to put a fly in front of them and entice them to move just a little and open their mouths,  but I could see my fly in the middle of the schools being completely ignored.   Fish weren’t even following the fly like they were a couple weeks ago during a slow day.. 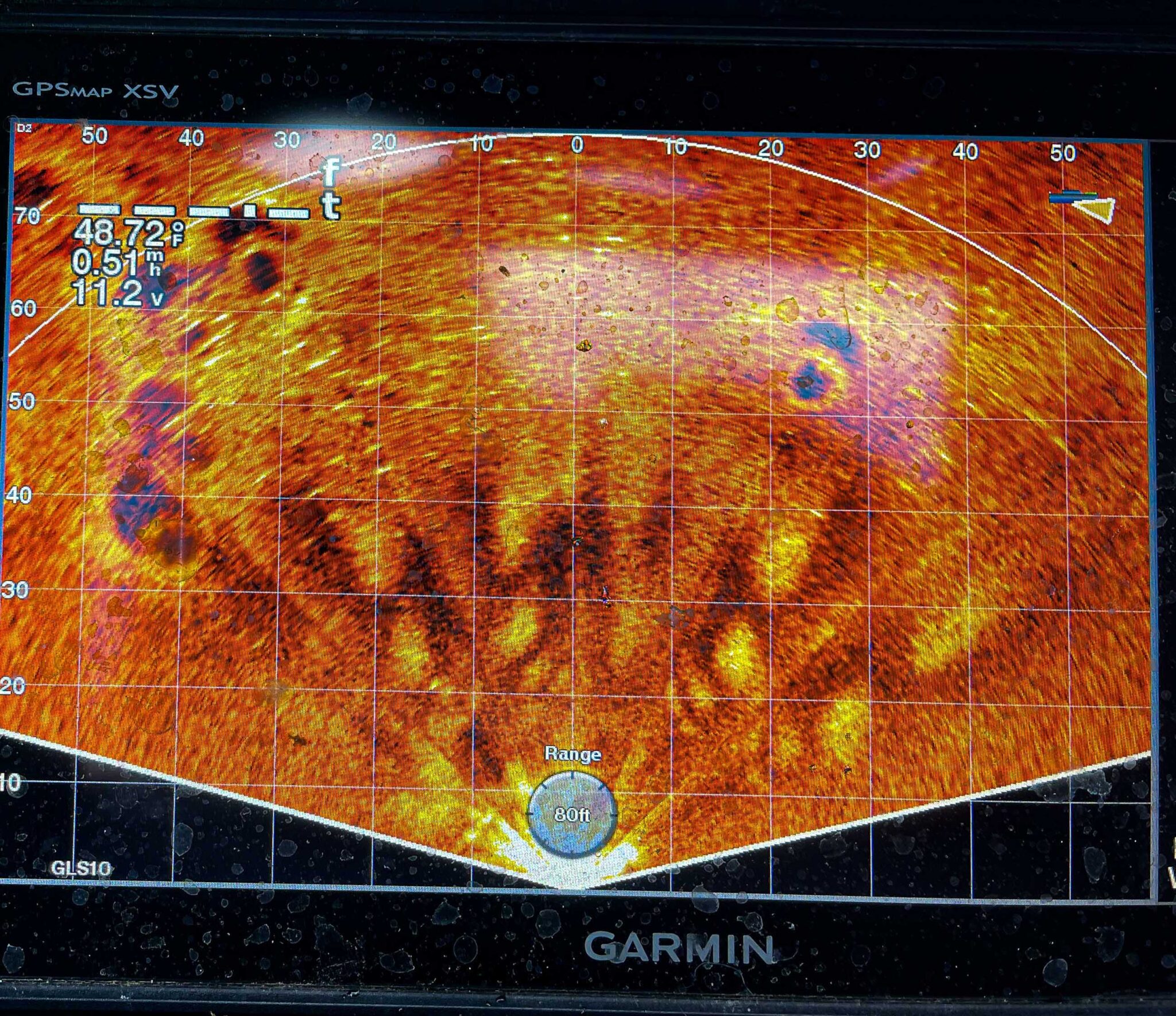 I think the reason the fishing was so slow was the water temperature still dropping.   The water temp was around 48 degrees and I think the fish were just cold like I was.   I dressed warm and consumed all my hot liquids in the first two hours.   I found it hard to strip the fly slowly and caught myself stripping too fast to avoid shivering.  The forebay humbled me today but I think it’s just a matter of waiting for the fish to acclimate to the muddy and cold water.   They are eventually going to get hungry.  Last January and February had some great days with those cold fish on the the feed.   I just hope I’m there when it turns on.

I looked at last years blog post on January 2, 2021.   I fished the main lake the day after New Years and caught over half a dozen fish off the dam and trash racks.   Of course the Lake has been drained for construction now and it’s a whole new ball game this year.    Hopefully, I’ll get a chance to fish it one more time in the next couple month before its shut down.

What is “EASY” fishing

I had a great chat with Legend Dan Blanton a couple weeks ago  that got me thinking about the definition of “Easy fishing”.  Honestly,  i dont think any fishing day is really not fun and a  “I wish I didn’t go”  type of day.   Unless you had a day like Eric did last week when the trolling motor and outboard failed and equipment was lost.   The one thing I realized after our conversation was that Easy Fishing and Fun Fishing are not always the same. There are times that the fish in the forebay and lake will eat anything that’s moving.   On days like that,  fishing structure and old productive sites is a sure thing.  Some days any retrieve and any fly will work if you put it anywhere near a fish.   Those are fun days for sure.   But what about the days where you see tons of fish on the finder and can’t catch them?   Is that not fun?   Before Sonar,   I can definitely tell you that fishing all day for 5 fish was not that fun since all you do all day is compare the catch and quality  of the fishing to the “good days” where fish are everywhere eating anything.   I’ve caught 60 fish in a half day when it’s easy fishing.  The  real question  “is it still fun if I dont catch  fish?”,

For several reasons, the answer to that question for me is definitely yes,  aside from the  axiom “the worst day fishing is better than the best day working”.  After thousands of trips to the Forebay over the last 50 years,  no day is exactly the same.   Those slow days on the lake and forebay have helped me evolve as a striper fly fisherman.      During my sons medical residency years ago, he use to complain to me that he was never prepared enough in the eyes of his mentors.  His instructors would keep asking him questions til he answered one wrong and then chastise him for not being prepared.  He use to complain that no matter how well he prepared,  he would always fail to answer the last question correctly.   I explained to him that this is the tradition of teaching in medicine.  To push the boundary of what you don’t know so you can grow.  Such is fishing as well.  Failure is what grows a fisherman’s skill.  The question is identifying what failed.   With the advent of real time sonar,  it’s much easier to visualize and identify the causes of failure.   One thing I’ve learned this last year is that the stripers are always there in numbers but in different places in different conditions.     The epic fails on the forebay over the last year has not been about not finding fish,  but watching their refusal to hit the fly.  Like a tough day on the Henry’s Fork fishing for over selective trout without success,  so is site fishing with sonar to deep stripers. Site fishing is the most exciting form of fly fishing there is. and it’s the opposite of blind casting high probability spots.  Technology has brought big fun for me on those fishless days because its all sight fishing now.

The second reason that fishless days are still as fun as “Easy Fishing”  is that at 65 years of age,  I see a day when I can’t fish like this.   I see a day when a good day has to be an easy day.   This last year Ive taken a dozen people out over the age of 70 and I can definitely say that their idea of a good day has changed over the years.  These older wiser lifelong fly fishermen have changed the way I look at a good day of fishing.   Every day you are healthy and have the resources and time to fish is a “Good”  day.   And if it means a tough day on your home waters is the only option to fish that day,  make the most out of every opportunity and advantage to make it a great day by exercising your mind, improving your skills, trying new techniques and  appreciate fishing an hour from your home no matter what the catch rate is.  . Take time to talk to the people around you and share experience. Improve the world with interpersonal relationships and new friends.  Look at the balance of nature and appreciate what hasn’t been ruined vs dwell on what has been ruined.    Think of the future of fishing this spot vs how good it use to be and will never be again.  Several of my older fishing buddies died this year,   they are never going to have  a good, easy or bad day on the lake or river again.